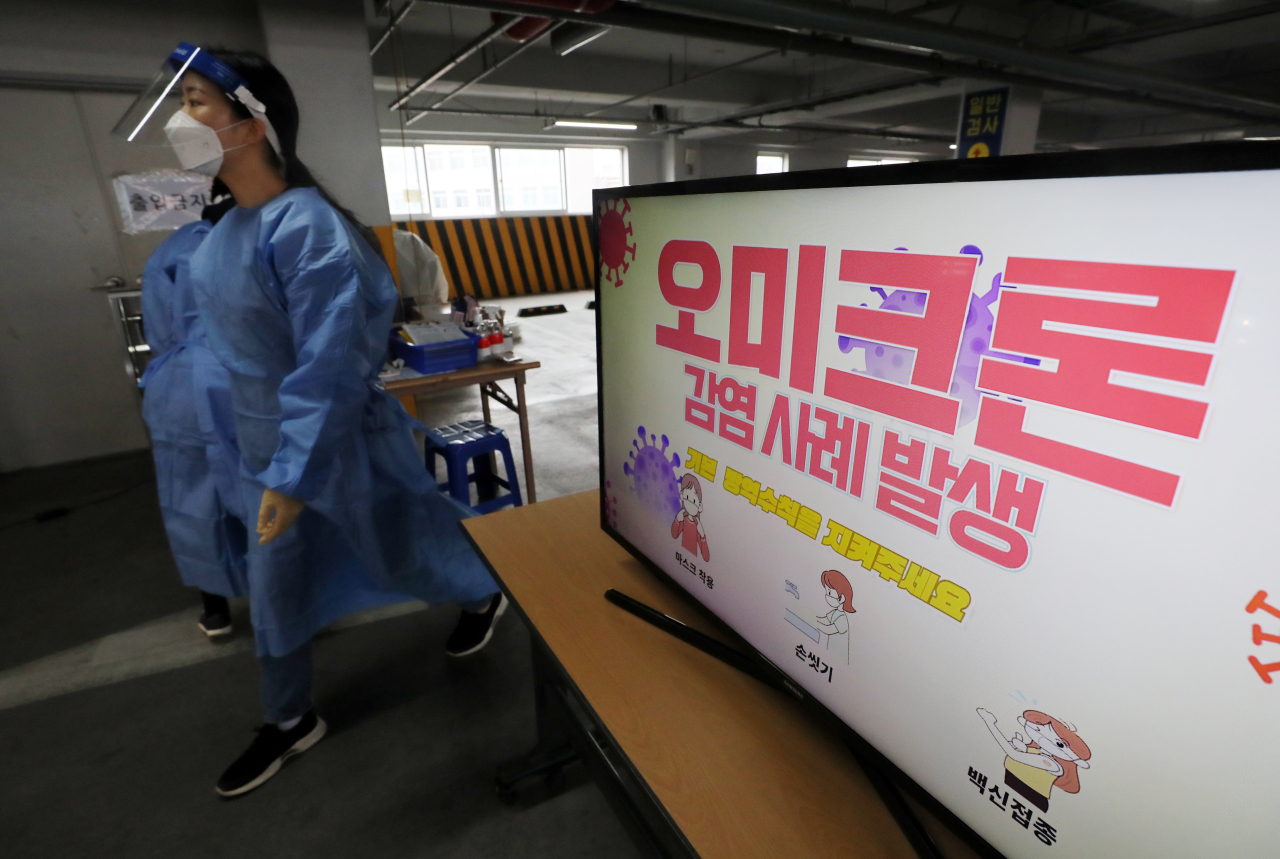 A screen at a screening center for coronavirus tests in the southwestern city of Gwangju on Friday shows a report on the emergence of South Korea`s first cases of the new omicron coronavirus variant. (Yonhap)
South Korea's daily coronavirus cases recorded an all-time high of 5,352 on Saturday, a day after the country announced tough restrictions for four weeks to control the spread of the omicron variant.

New cases of critically ill patients and deaths also hit record highs while an additional three confirmed cases of the omicron variant were reported to bring the total cases in the country to nine.

The daily new COVID-19 cases included 5,327 local infections, raising the total caseload to 467,907, according to the Korea Disease Control and Prevention Agency (KDCA).

Saturday's total infections mark the highest number since the country reported its first COVID-19 case in January 2020 and exceeds the previous record of 5,226 reported Thursday.

As of Saturday, health authorities have confirmed nine omicron variant cases and four potential ones, with the results from tests yet to be released.

Of the nine confirmed cases, four came from overseas and five were local infections.

The country's first confirmed cases of the variant were discovered in a fully vaccinated couple who returned home from Nigeria last week.

Health authorities are worried about a possible community infection involving the variant, with tests currently under way on over 400 people who attended the same church service in Incheon, 40 kilometers west of Seoul, as family members of one of the nine infected.

The confirmed cases of the omicron variant pushed the government to tighten its eased rules that began last month under the "living with COVID-19" scheme.

Starting Monday till Jan. 2, the maximum number of people at private gatherings will be cut to six in the greater Seoul area and eight in other areas, from the current 10 and 12.

Visitors to high-risk businesses, including saunas, pubs and gyms, have to show vaccine passes or a negative test result.

Those aged between 12 and 18 also will be required to meet the vaccine pass measures starting Feb. 1.

A one-week grace period for the vaccine pass system will be allowed before the rules are enforced.

Inbound travelers have to be put under a 10-day mandatory quarantine regardless of their vaccination status till Dec. 16.

About 3.85 million people, or 7.5 percent of the population, have received a booster shot. (Yonhap)