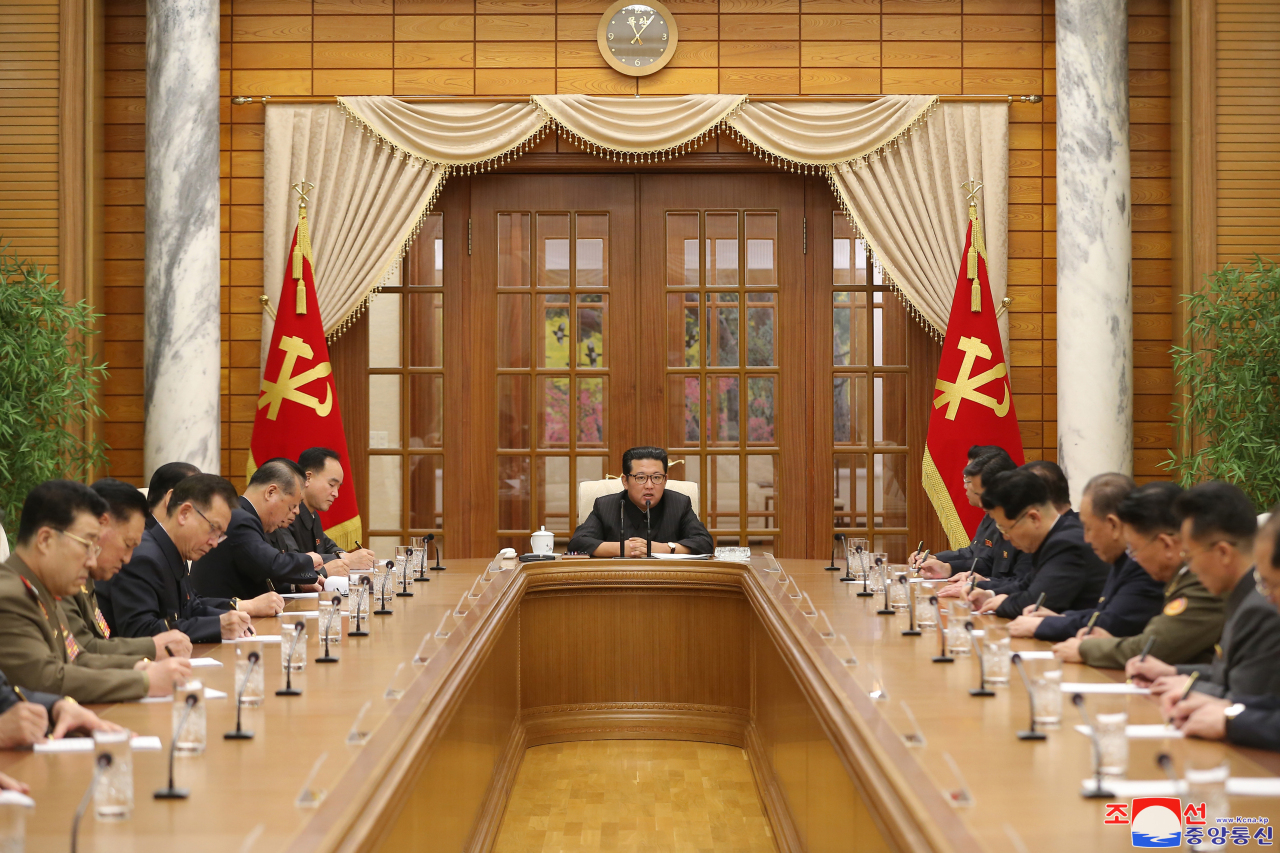 North Korean leader Kim Jong-un (center) convenes a politburo meeting of the country’s ruling Workers’ Party of Korea in Pyongyang on Wednesday, during which it decided to hold a plenary meeting later this month. (KCNA-Yonhap)
North Korea will hold a key party meeting later this month as leader Kim Jong-un is set to mark 10 years in office, North Korean media said Thursday, with growing speculation that Pyongyang could unveil its policy toward Washington and Seoul for the next year.

The decision to hold a plenary session was made during a politburo meeting of the ruling Workers’ Party of Korea held on Wednesday, presided by leader Kim, according to the Korea Central News Agency.

The 4th plenary meeting of the 8th Central Committee of the Workers’ Party of Korea is set to be held in the last third of December, to review the “implementation of major party and the state policies for 2021 and to discuss and decide on work plans for next year,” the KCNA said.

The meeting will likely fall around the 10th anniversary of leader Kim’s ascent to power on Dec. 30. Kim will likely use the gathering to stress his achievements over the past decade and announce policy goals for the next year.

Observers are keen to learn what kind of messages Pyongyang will send to both domestic and international audiences, especially toward the US and South Korea, amid the long-stalled nuclear talks with Washington and strained inter-Korean ties.

“Considering the plenary meeting presents the country’s major policy direction, (the North’s) foreign policy could be disclosed, including its stance on the South and the US,” a Unification Ministry official said on condition of anonymity.

There’s also a possibility that the decisions reached at the plenary meeting could replace Kim’s iconic New Year’s address, where the country’s annual policy plans and directions are usually unveiled. In December 2019, Kim gave a speech at a four-day plenary meeting and skipped his annual New Year’s message in 2020 for the first time since taking power.

“Since Kim assumed power, there have been a variety of ways the New Year’s policy direction has been announced,” the ministry official said, adding if the plenary session is held this month, it could possibly influence the New Year’s address.

The upcoming plenary meeting will mark the 11th session held since Kim took power in 2011, and the fourth this year alone, the most in a year.

The ministry official assessed that the frequent party meetings, including the politburo and plenary sessions, indicate that the party has become a key decision-making platform under Kim’s rule.

Meanwhile, Kim touted 2021 as a year of “victory” where positive changes were made in the overall state affairs, including politics, economy, culture and national defense, during the politburo session on Wednesday.

He also warned that the country must be prepared for a “very giant struggle” next year, to implement the five-year economic plan he announced earlier this year.