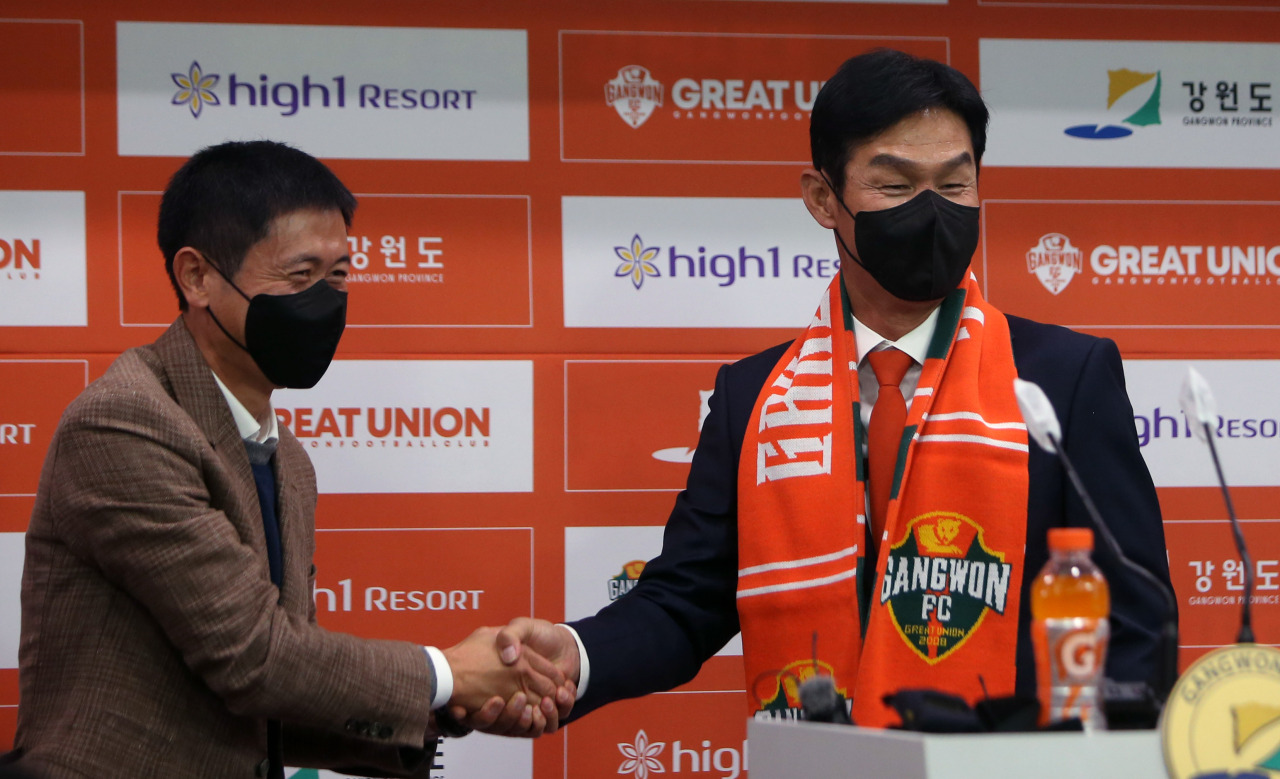 Former South Korea international Choi Yong-soo will make his Gangwon FC coaching debut against his former team, FC Seoul, in the K League 1 on Sunday, but there's much more riding for Choi than just trying to get his first win over familiar faces.

When Choi was hired on Nov. 16, he was immediately tasked with trying to rescue Gangwon FC from being relegated to the second-tier K League 2 next year.

With two matches left this season, Gangwon FC are in 11th place, second from the bottom, with 39 points. They are only three points ahead of Gwangju FC and two back of 10th-place Seongnam FC.

The last-place club in the K League 1 will be automatically relegated to the K League 2 for 2022. The 11th-place team will face a K League 2 playoff winner in the promotion-relegation playoff next month.

As FC Seoul's coach, Choi won the K League title in 2012 and the FA Cup title in 2015. After a brief stint in China, Choi came to the rescue of FC Seoul in late 2018 and saved them from relegation in his second tour of duty.

And now, he must do the same for Gangwon FC at the expense of FC Seoul.

The must-win match for Gangwon will kick off at Jamsil Olympic Stadium in Seoul at 4:30 p.m. Sunday.

FC Seoul are breathing a bit easier after two straight wins pushed them to ninth place at 43 points, but they're still in danger of falling to the promotion-relegation playoff.

At the top of the tables, Jeonbuk Hyundai Motors and Ulsan Hyundai FC are entering the penultimate week of the season knotted at 70 points. Jeonbuk hold the tiebreak edge in goals scored, 67-62, in their pursuit of a record fifth consecutive title.

Daegu FC, sitting in third place, hold the key to the title picture, as they will play both Jeonbuk and Ulsan to finish out the season.

First up will be Jeonbuk at 2 p.m. Sunday at DGB Daegu Bank Park in Daegu, some 300 kilometers southeast of Seoul.

Daegu FC can't finish any higher than third place, and it may be tempting to assume that they have little left to play for.

But finishing third in the K League 1 will mean a spot in next year's Asian Football Confederation (AFC) Champions League, the top club competition in the continent. Daegu FC currently have a four-point lead over Jeju United for third place

Daegu FC can take another path to the AFC Champions League -- by winning the FA Cup. They won the first leg of the final over Jeonnam Dragons 1-0 on Wednesday, with the second leg set for Dec. 11. The one-goal advantage may be too close for comfort and locking down the third spot in the K League 1 will be a much-needed insurance for Daegu FC.

Jeonguk, though, have dominated Daegu FC recently, with six wins in their past seven meetings. Jeonbuk have scored at least two goals in each of those six victories.

Ulsan, meanwhile, will visit Suwon Samsung Bluewings at 2:40 p.m. Sunday. These two clubs have had one win, one draw and one loss against each other this season. (Yonhap)