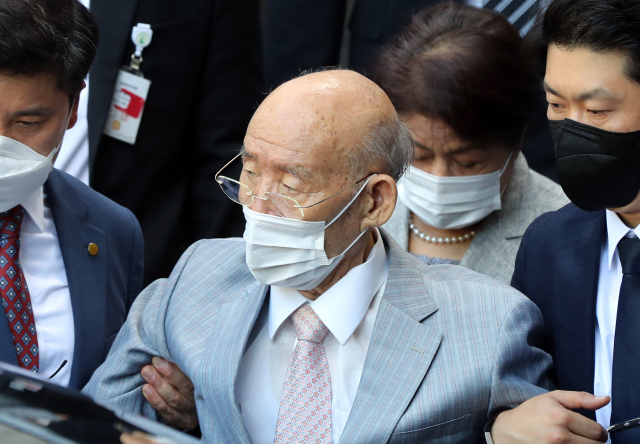 Chun Doo-hwan (Yonhap)
Chun Doo-hwan, who was president of South Korea from 1980 to 1988 after seizing power in a military coup and whose reign was marked by the brutal repression of pro-democracy protesters in Gwangju in 1980, died Tuesday. He was 90 years old.

He died less than a month after Roh Tae-woo, one of his closest aides in the 1979 coup, who was elected president after democracy protests forced Chun to stand down.

Chun, who had multiple myeloma, a type of blood cancer, died at 8:40 a.m. at his home in Yeonhui-dong, Seodaemun-gu, Seoul.

He was born in Hapcheon, South Gyeongsang Province, in 1931 and graduated from the 11th Daegu Technical High School and Army Academy. He later trained in the United States, specializing in guerilla tactics and psychological warfare.

He served as deputy chief of the Cheong Wa Dae security office, commander of the Armed Forces Security Command, 10th head of the Central Intelligence Department, standing chairman of the National Security Legislative Council and head of the Army.

Chun took power through a military coup in 1979 and ordered a bloody crackdown during the Gwangju Democratic Uprising in 1980 that left hundreds of pro-democracy protesters dead. He served as president until early 1988.

After retiring, Chun and his colleague Roh Tae-woo were arrested in 1995 on charges of taking bribes from businesspeople while in office. They were also found guilty of mutiny and treason stemming from Chun’s coup and the 1980 massacre.

Roh was sentenced to 22 1/2 years in jail -- reduced to 17 years on appeal -- and fined 220 billion won ($185 million). Chun was sentenced to death, which was later commuted to life in prison and a fine of 220.5 billion won. But both received presidential pardons in December 1997.

Chun never apologized for the 1980 Gwangju massacre of pro-democracy protesters.

The unpaid portion of the fine amounts to 95.6 billion won. Prosecutors have begun a legal review to see if it is possible to recover any of the funds.

A few years ago, the former leader was also found guilty of defaming the late Rev. Cho Cheol-hyun (Father Jovio), a Roman Catholic priest who testified to having witnessed Chun’s troops shooting demonstrators from helicopters. Chun was sentenced in 2020 to eight months in prison, suspended for two years. An appeal was underway at the time of his death.

The Ministry of Patriots and Veterans Affairs said Chun would not be buried in the National Cemetery because he was sentenced to prison for rebellion and the 1980 Gwangju massacre.

He is unlikely to be given a state funeral for the same reasons.

When Roh Tae-woo was given a state funeral amid much controversy last month, the government drew a clear line, saying Chun’s case would be different.

Prime Minister Kim Boo-kyum said in a media interview last month that Roh was given a state funeral because, unlike Chun, he became president via public support through legal procedures, he paid the mandated fine in full, and his bereaved family had visited Gwangju to pay respects to the victims and had shown sincerity.

Cheong Wa Dae said it had no plans to send an official wreath or message of condolence.

“We pray for the repose of former President Chun Doo-hwan and give condolences to the bereaved family,” said spokesman Park Kyung-mi. “It is regrettable that there is no sincere apology without revealing the truth of history.”

Kim Ki-hyun, floor leader of the main opposition People Power Party, said, “Because he is a protagonist of a huge incident that has received much public criticism, he is heavily responsible for that.”

But he expressed condolences over Chun’s death, adding that he did so out of duty.

“Whether (we) like or dislike (him), he showed various controversies and recorded a scene in Korean history,” Kim said.

Lee Jae-myung, the presidential candidate for the Democratic Party of Korea, said Chun had remained obstinate to the very end.

“He did not reflect on and apologize to the people until the last minute for a crime that killed at least hundreds of people, usurped state power for his private desires and could never be forgiven,” Lee said.

Lee will not be attending his funeral.

Democratic Party spokesperson Cho Oh-seop told reporters, “It would have been better to reveal the truth of history (before he died).”

Cho said, “He should have apologized to the people, not Gwangju citizens. ... Corruption and military mobilization were used to slaughter the people.”