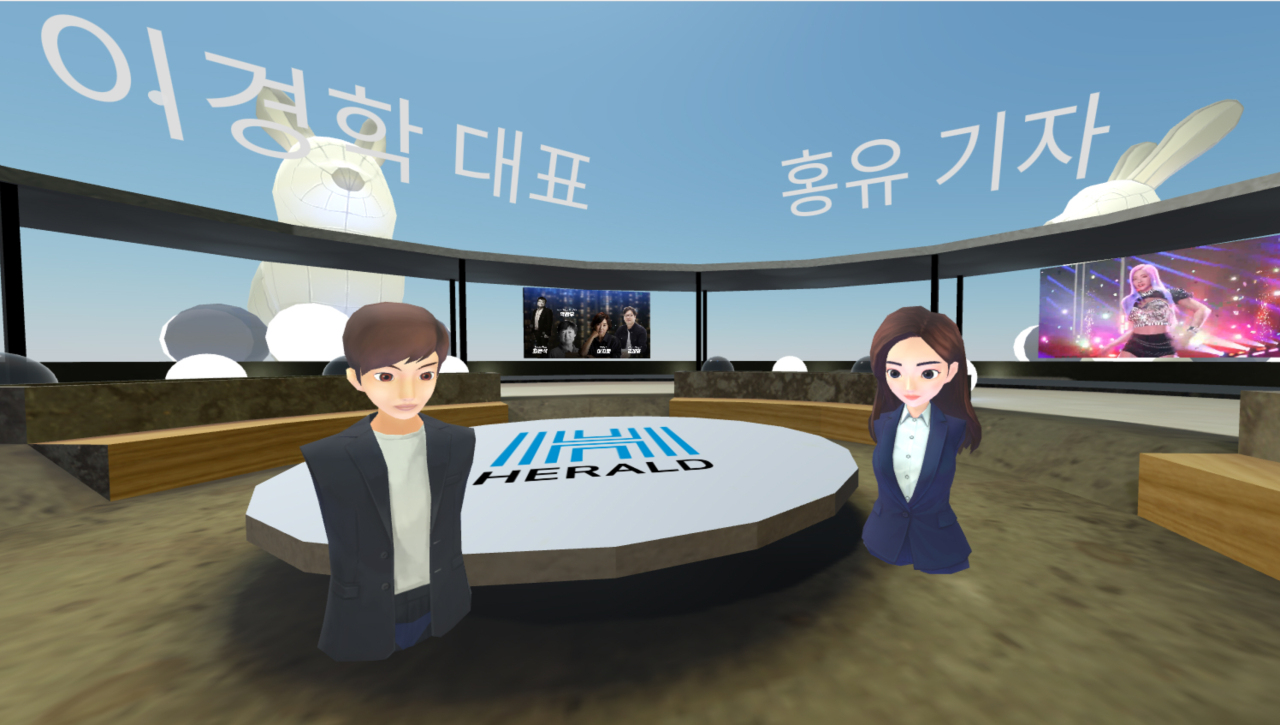 The Korea Herald reporter Hong Yoo (right) greets Warpsolution CEO Lee Gyeong-hak at an interview conducted in the metaverse. The event was the first such media interview held via virtual reality in South Korea. (Metafactory)
Metaverse, the fast-emerging digital platform of interconnecting virtual communities, will provide new business opportunities for budding Korean companies seeking investors for corporate growth and the complete commercialization of their products and services.

In an interview jointly hosted by The Korea Herald and Hyundai Futurenet, CEOs of three companies -- Warpsolution, Digisonic and Citylabs -- said they are working on ways to develop both physical and virtual technologies to enhance the metaverse environment to be similar to the real world, so that businesses can forge partnerships without having to physically meet face to face.

The interview, held on the sidelines of the Coming-M 2021 metaverse forum, was the first such press conference conducted on a metaverse platform in South Korea. The co-host, Hyundai Futurenet, is a leader in new businesses such as digital signage, messaging, artificial intelligence, big data, digital health care and wireless charging, officials said. They are also establishing their own metaverse platform to promote various joint projects with domestic and foreign metaverse companies and institutions.

Held in a virtual world created by startup Belivvr, interviewees gathered at a conference room with a round table and display panels on the walls playing clips of the Coming-M 2021 metaverse conference.

The interview began as an avatar of Warpsolution CEO Lee Gyeong-hak walked into the conference room and introduced his company as a wireless charging solution provider.

“We make chips that can trap frequencies and turn them into energy, allowing long usage of head-mounted displays used in the metaverse,” said Lee.

Base stations send out frequencies along with data when they are providing Wi-Fi. But smartphones, for example, only make use of the data, and the frequencies remain unused. Warpsolution created a chip that can store such frequencies being wasted and turn them into power to charge devices wirelessly, he said.

In the metaverse, technology to depict the five human senses is important, according to Digisonic, a startup that creates devices to embody sounds realistically.

“Hearing sense is the second most important sense after sight in the metaverse. We are trying to provide 360-degree spatial audio to make the world in the virtual world more realistic,” said Digisonic CEO Kim Ji-heon.

He added they are the one and only company that can deliver a sound coming from below through an audio device.

Commercial earphones and headphones at the moment can only distinguish sounds coming from the sides at eye level.

“Let’s say we bring a pet into a metaverse platform. They will be moving around below your knees. With our hearing devices, the sound of a pet barking or meowing below you is portrayed just like in the real world,” Kim added.

Blockchain technology is essential in the metaverse, as it is a fully digitized environment where 100 percent of the assets are digital, said Citylabs Director Kim Hang-jin.

“That is why we believe NFTs that utilize blockchain will be the core technology to contain digital assets within the metaverse,” he said.