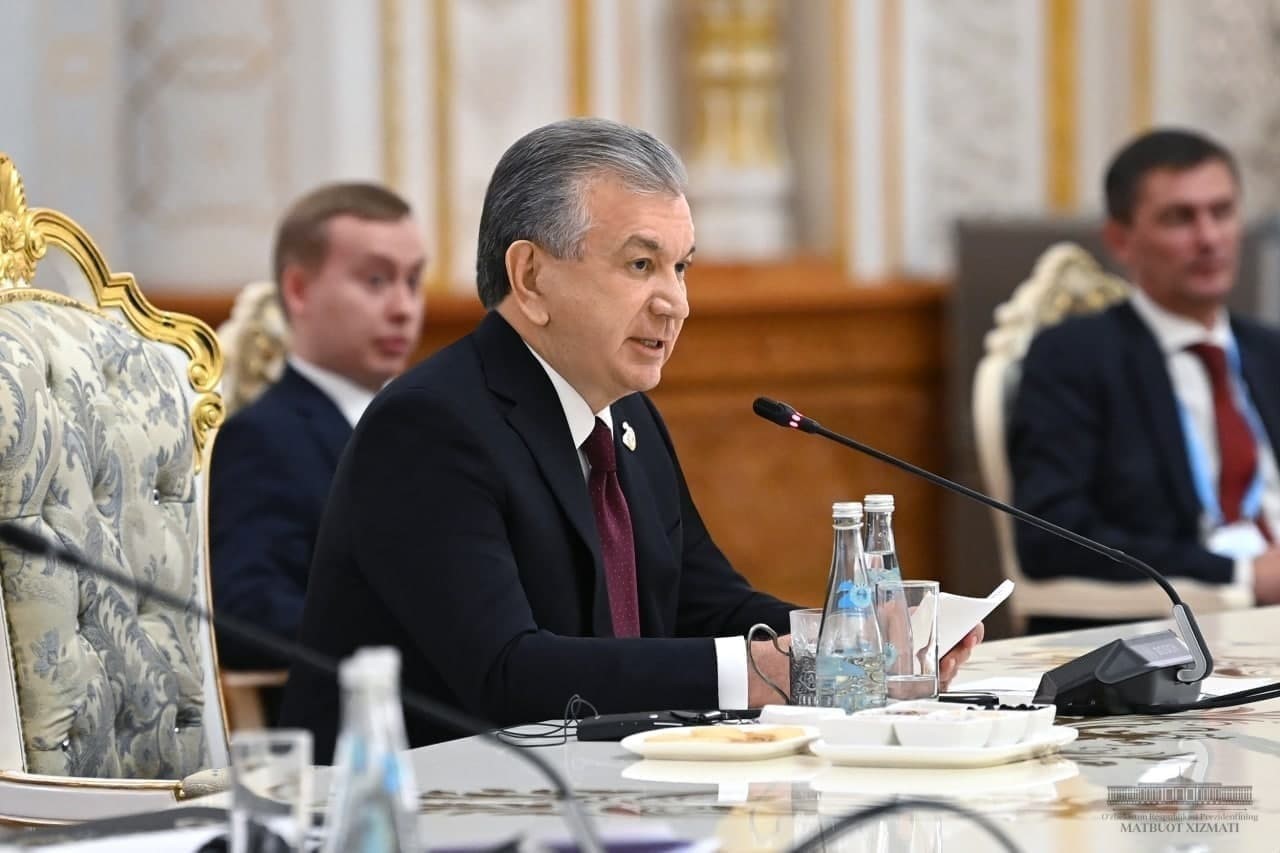 Uzbek President Shavkat Mirziyoyev addresses the Shanghai Cooperation Organization summit in Dushanbe, Tajikistan, Sept. 17. (Embassy of Uzbekistan in Seoul)
One of the key issues on the international agenda is Afghanistan today after the Taliban came to power. It is a central topic of the 2021 Shanghai Cooperation Organization heads of state summit held Sept. 17, 2021, in Dushanbe. Most SCO states share a common border with Afghanistan and directly feel the negative consequences of the unfolding crisis.

Achieving peace and stability in Afghanistan is one of the main security goals in the SCO region. The seriousness of the issue and high degree of responsibility with which states treat its solution is evidenced by the discussion of Afghan issues in the SCO-CSTO format. Contemporarily, a major goal of the multilateral negotiations was to seek agreed approaches to the Afghanistan situation.

Uzbek President Shavkat Mirziyoyev presented his vision of the ongoing processes in Afghanistan, outlined the challenges and threats associated with them, and also proposed a number of basic approaches to building cooperation in the Afghan direction.

President Mirziyoyev stressed that Uzbekistan, as the country’s closest neighbor, which directly faced threats and challenges in those years, is clearly aware of all the possible negative consequences of the situation that could develop in Afghanistan under a worst-case scenario.

In this regard, President Mirziyoyev called on SCO member countries to unite efforts to prevent a protracted crisis in Afghanistan and related challenges and threats to member countries. To this end, it was proposed to establish effective cooperation on Afghanistan, as well as to conduct a coordinated dialogue with the new authorities, carried out proportionately in compliance with their obligations.

Firstly, the Uzbek leader stressed the importance of achieving broad political representation of all segments of Afghan society in state administration, as well as ensuring respect for fundamental human rights and freedoms, especially those of women and national minorities. It should be noted that Tashkent has always adhered to a principled position on the need to respect the sovereignty, independence and territorial integrity of the neighboring country. There is no alternative to a peaceful settlement of the conflict in Afghanistan. It is important to conduct a political dialogue with an inclusive negotiation process that takes into account exclusively the will of all Afghan people and the diversity of Afghan society.

In this regard, the formation of a representative government, a balance of the interests of ethno-political groups, and the comprehensive consideration of the socioeconomic interests of all segments of society in public administration are the most important conditions for sustainable and lasting peace in Afghanistan.

Moreover, the effective use of the potential of all social, political, ethnic and religious groups can make a significant contribution to the restoration of Afghanistan’s statehood and economy, and to the country’s return to the path of peace and prosperity.

Secondly, the authorities should prevent the use of the country’s territory for subversive actions against neighboring states, and should exclude patronage of international terrorist organizations. It was emphasized that countering the possible growth of extremism and the export of radical ideology, and stopping the penetration of militants across borders and their transfer from hot spots should become key tasks of the SCO.

Over the past 40 years, the war and instability turned Afghanistan into a haven for various terrorist groups. According to the UN Security Council, 22 out of 28 international terrorist groups, including the Islamic State group and al-Qaida, are currently operating in the country. Their ranks also include immigrants from Central Asia, China and the Commonwealth of Independent States countries. Until now, joint efforts have been able to effectively stop terrorist and extremist threats emanating from the territory of Afghanistan, and has prevented them from spilling over into the space of the Central Asian countries.

Concurrently, a protracted power and political crisis caused by the complex process of forming a legitimate and capable government may cause a security vacuum in Afghanistan that can lead to the activation of terrorist and extremist groups, and can increase the risks of transferring actions to neighboring countries. Moreover, the situation is aggravated by the growing poverty of the population of Afghanistan.

According to the UN Development Program, by now the rate of poverty among the population is 72 percent (27.3 million people out of 38 million). By the middle of 2022 it may reach 97 percent. Experts predict that the difficult socioeconomic situation, coupled with the deterioration of the military-political situation, may lead to flows of refugees from Afghanistan. According to UN estimates, by the end of 2021, their number may reach 515,000. At the same time, the main recipients of Afghan refugees will be neighboring SCO member countries.

Under this background, the president highlighted the importance of preventing the isolation of Afghanistan and its transformation into a “rogue state.”

Pertaining to the issue, it was proposed to unfreeze the assets of Afghanistan in foreign banks in order to prevent a large-scale humanitarian crisis and influx of refugees, as well as to continue to assist Kabul in economic recovery and solving social problems.

Otherwise, Afghanistan will not be able to get out of the clutches of the illegal economy and may face expansions of drug trafficking, weapons and other forms of transnational organized crime. The negative consequences would be first felt by neighboring countries.

In this context, the president called for the consolidation of the international community’s efforts to resolve the Afghanistan situation as early as possible and proposed a high-level meeting in the SCO-Afghanistan format in Tashkent with the involvement of observer states and dialogue partners.

Akramjon Nematov is first deputy director of the Institute for Strategic and Interregional Studies under the president of the Republic of Uzbekistan. These comments are based on the initiatives of Uzbekistan in the Afghan direction put forward at the meeting of the Council of Heads of State of the Shanghai Cooperation Organization, held Sept. 16-17. -- Ed.