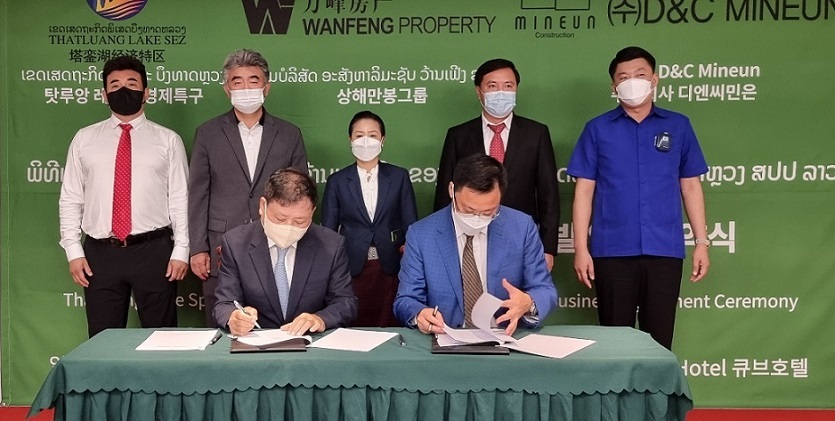 Chairmen of the two companies held the signing ceremony with Sinlavong Khoutphaythoune, president of the Lao Front for National Construction, who also serves as a politburo member of the Central Committee of the Lao People‘s Revolutionary Party and Kham Chan Vongsenboun, vice minister of planning and investment attending.

Jung Won-ju, vice chairman of South Korea‘s Jungheung Group also participated in the ceremony as an observer, according to officials.

Since 2012, Wanfeng Property has invested a total of 463 billion won ($391 million) to construct social infrastructure like roads in the public site surrounding Thatluang lake to turn the area into the country’s major economic center and trade hub filled with hotels, apartments and commercial buildings.

Under the partnership, D&C Mineun, which operates services regarding real estate development and investment, will be in charge of attracting investment and selling apartments built in the development site to Korean investors.

“Laos’ economic growth has been stalled due to lack of transportation and logistics infrastructure, but the country will be developed completely when a railroad opens to connect China and Laos,” said Yang Young-hwan, chairman of D&C Mineun. “Thatluang Lake Special Economic Zone, in particular, will enjoy a direct benefit from the inter-country railroad set to open (on December 2).”

“Thatluang Lake SEZ is a region provided with administrative services by the Laotian government,” said Jian Fu, president of Wanfeng Property. “We believe that the region, which comes with a series of tax benefits and support, is attractive enough to get attention from Korean businesses.“

Jung of Jungheung Group also said that the builder will review whether to cooperate with D&C Mineun and Wanfeng Property for the Laos project.

“I’m so glad to have a tour of the development site in Laos, which I have always been interested in. Jungheung Group will review measures to cooperate with D&C Mineun and Wanfeng Property,” Jung said.