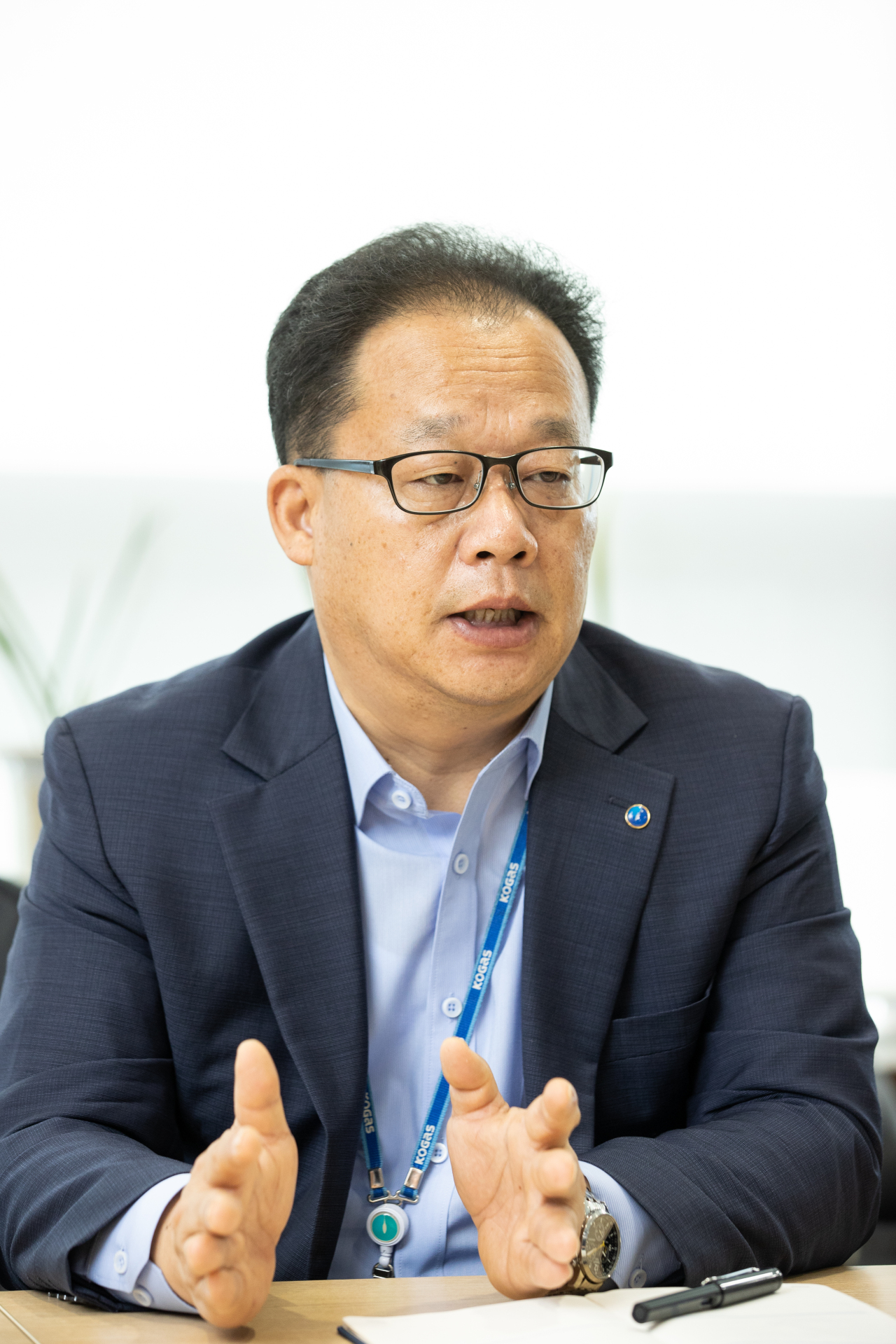 Yang Jin-yul, the executive vice president and head of the hydrogen business division at Korea Gas Corp., speaks during an interview with The Korea Herald. (Kogas)
Korea Gas Corp. was born in the aftermath of the global oil crises of the 1970s, with a mission to lead a fuel transition to natural gas.

Nearly four decades later, the company is being asked to step up, as South Korea plans another grand energy transition to hydrogen.

“In the aftermath of the global oil crisis, Korea decided to switch its national fuel to natural gas and formed Kogas (in 1983). Since then, Kogas led the natural gas transition and experienced every step along the way,” Yang Jin-yul, the executive vice president and head of the hydrogen business division at Kogas, told the Korea Herald.

Kogas built Korea’s natural gas infrastructure from scratch. From countries thousands of miles away such as Qatar, Australia and the United States, it brought the fuel in by ship. At home, the firm laid out a network of pipelines that now spans some 4,945 kilometers across the nation.

After watching Kogas making money with natural gas shipped across the ocean, private companies such as Posco, SK and GS have jumped into the business one by one since 2005.

Yang says this is the exact scenario Kogas is aiming for with hydrogen.

“The role of Kogas, as a public company, is to set an example. It’s our mission to develop a hydrogen business model that private companies can benchmark and follow,” the 54-year-old hydrogen expert said.

Under the firm’s blueprint, Kogas will invest roughly 37 trillion won to build solar and wind farms worth 17.1 gigawatts overseas by 2030. With the green energy generated, it would be able to produce 1.21 million tons of green hydrogen a year by 2040, which will be transported to Korea for local consumption. The green hydrogen business is projected to generate 4.5 trillion won in revenue.

“Right now, the industry doesn’t know which is the best way to transport and store hydrogen. So private companies are asking, ‘Is the hydrogen business profitable?’ Kogas will find out and offer the most realistic option,” Yang said.

As hydrogen is too bulky in a gaseous state, it is currently converted and chilled into liquid ammonia at below minus 33 degrees Celsius. This method can utilize the existing infrastructure of the global ammonia industry and therefore doesn’t require additional investments.

But turning hydrogen into liquid ammonia and returning it to hydrogen is energy-intensive and drives up the cost of hydrogen.

Yang says the long-term solution is to chill hydrogen into pure liquid at minus 253 degrees Celsius. The problem is, there is no ship designed to transport liquid hydrogen yet.

“Private companies know that pure liquid hydrogen is the ultimate answer, but they’re currently considering liquid ammonia because there’s no ship. This is why Kogas is reviewing (to order) a liquid hydrogen carrier. Kogas will set a precedent.”

As for the vessels to carry hydrogen, South Korea has a competitive advantage, being home to the world’s top-ranked shipyards.

The real challenge is the source technology to liquidate hydrogen, Yang stressed.

“We must localize the technology, or will lose the opportunity to take initiative.”

Unlike oil and natural gas, hydrogen is everywhere. This means a lot for South Korea, a resource-poor country that imports all the fossil fuel it consumes.

“Until now, countries with oil and natural gas had the greatest say, and there was nothing Korea could do about it. However, hydrogen is energy which countries with the most advanced technologies can excel at. Korea must take this opportunity to lead the new energy paradigm.”