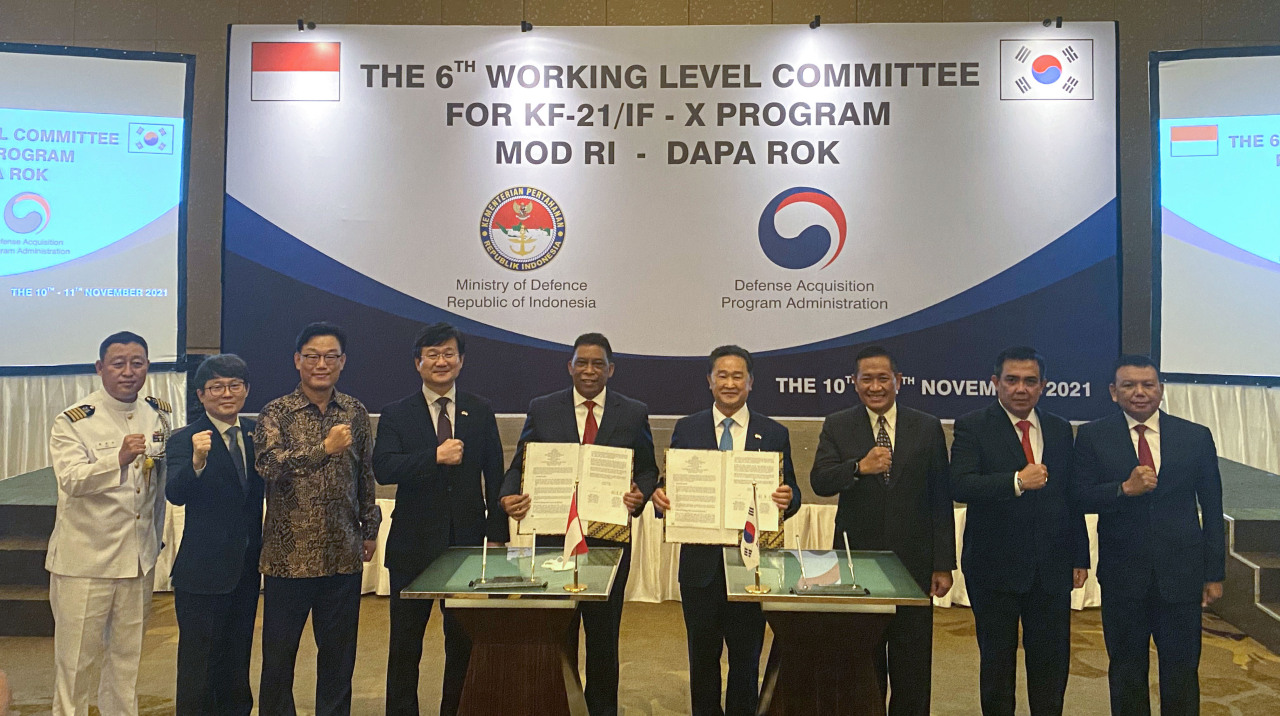 This photo, provided by the Defense Acquisition Program Administration (DAPA), shows officials from South Korea and Indonesia, including DAPA chief Kang Eun-ho (4th from L), posing for a photo after signing an agreement regarding cost sharing for a joint fighter development project in Jakarta last Thursday. (DAPA)
South Korea has lowered Indonesia's planned payment for its share of the cost for a joint fighter development project, as the warplane has been designated as "defense goods" eligible for a tax exemption, the state arms procurement agency said Monday.

DAPA announced the change after it concluded years of negotiations with Indonesia last week on a cost-sharing deal, under which Indonesia reaffirmed its earlier pledge to shoulder 20 percent of the KF-X cost and agreed to make in-kind payments for 30 percent of its share.

In Korea, once an item is classified as defense goods, it is exempt from value added taxes. The designation for the KF-X project came in 2017, but the change had not been reflected in the cost-sharing deal amid Indonesia's call for a renegotiation.

The two countries had held six rounds of negotiations, including Thursday's session in Jakarta, as Indonesia demanded a reduction in its share of the cost and other adjustments to the previous deal.

The two sides will have additional consultations on a detailed plan concerning how and when Indonesia will make its overdue payments for the defense project, which currently stand at around 800 billion won, DAPA officials said.

"Indonesia may find it difficult to make the overdue payments all at once due to the very difficult situations, including the COVID-19 pandemic," a DAPA official said. "But the negotiations had proceeded based on mutual trust."

South Korea has been working on the KF-X project since 2015 to develop an advanced homegrown fighter jet to replace the Air Force's aging fleet of F-4 and F-5 jets. (Yonhap)