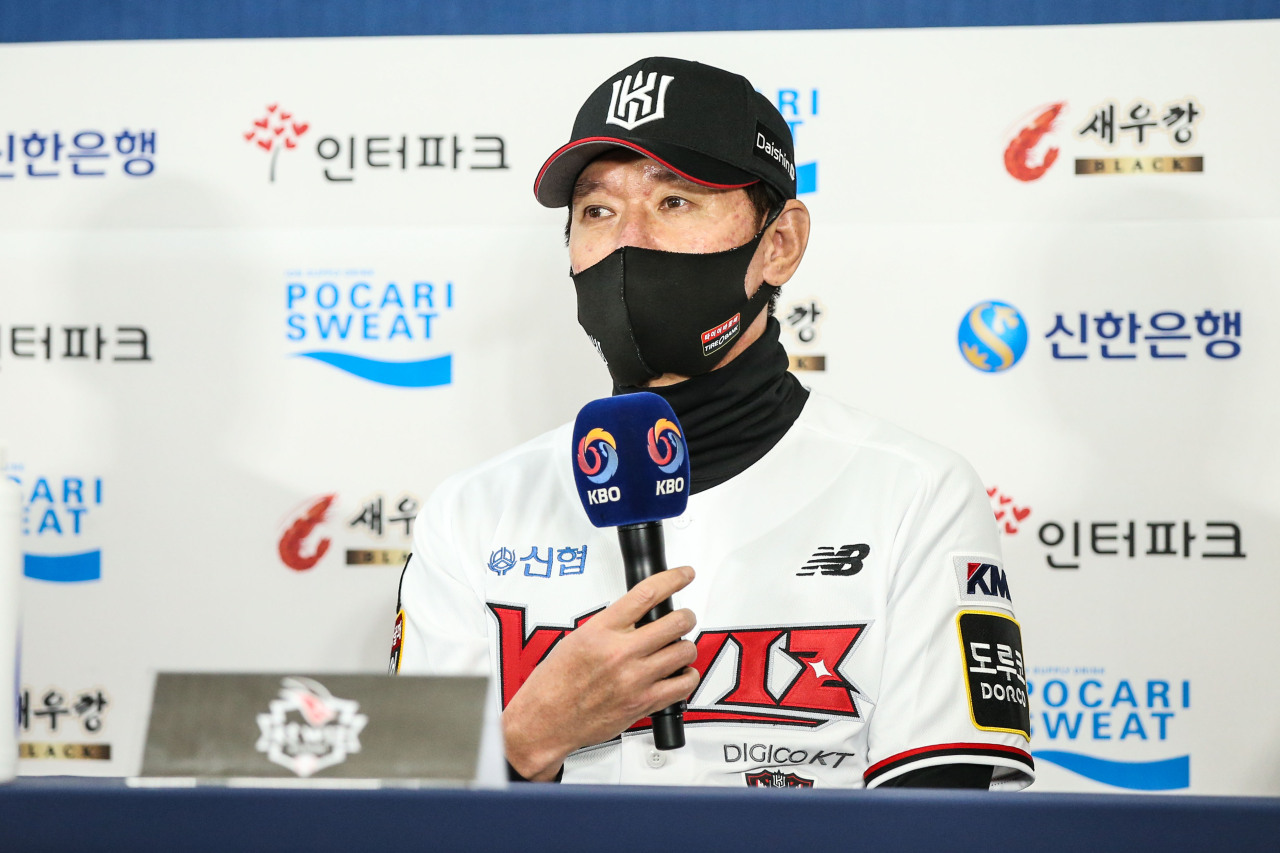 KT Wiz manager Lee Kang-chul speaks during the Korean Series media day at Gocheok Sky Dome in Seoul on Saturday, in this photo provided by the Korea Baseball Organization. (Yonhap)
If there's anything that KT Wiz skipper Lee Kang-chul learned last year managing in his first postseason, it's that he shouldn't mess with what got him there in the first place.

The Wiz got knocked out of the penultimate round in the Korea Baseball Organization (KBO) postseason in 2020, losing to the Doosan Bears in four games. This year, the Wiz have taken an extra step, earning a bye to the Korean Series as the regular season champions.

And once again, the Wiz will face the Bears, which, after finishing fourth in the regular season, played seven postseason games in a 10-day span earlier this month just to reach the Korean Series.

Before Game 1 on Sunday at Gocheok Sky Dome in Seoul, Lee said he will stick to his own guns this time.

"Last year, I made mistakes when I was trying to do things differently than in the regular season," Lee told reporters at a pregame press conference. "This time, I will try to keep things the same way and trust my starters more."

The Wiz have the luxury of five above-average to good starting pitchers, including Game 1 starter, William Cuevas.

The Bears scored 55 runs on 88 hits in seven postseason games so far without relying much on long balls. They've been spraying the ball all over the field, taking whatever pitchers gave them instead of forcing the issue at the plate.

Asked if Wiz pitchers had to make adjust accordingly, Lee, a former star pitcher himself, said he repeated the same mantra.

"My pitchers have been doing their own things to get here," Lee said. "Our pitching coaches and analytics department have talked to them. And I didn't want to mess with my pitchers' minds with any extra information."

After earning the direct trip to the Korean Series, the Wiz were able to rest up and prepare at their own pace for the past two weeks. The Bears have already been through the cauldron of the postseason pressure, but Lee insisted his team can't afford to worry about what the other side is going to do.

"We just have to focus on getting to their pitchers and put up a few runs on the board," Lee said. "If we can get over the hump in the first game, I think the rest of the series will go smoothly for us."

Doosan skipper Kim Tae-hyoung, managing in his seventh consecutive Korean Series, cut a more relaxed figure in his pregame interview. The Bears have vastly overachieved so far, and they're playing with house money at this point.

He also wasn't about to fix what wasn't broken. With lack of viable starting options, Kim has been riding his relievers hard so far. Right-handers Lee Young-ha and Hong Geon-hui in particular have done yeoman's work.

Lee, a former starter, won at least a game in three consecutive series out of the bullpen. He has pitched 11 innings so far and held opponents to three earned runs on nine hits.

"Young-ha has always had good stuff, and I think his confidence has been growing since moving to the bullpen," Kim observed. "His balance has improved as well. If our starter can't go long, he'll be the first guy out of our bullpen to eat up some innings." (Yonhap)