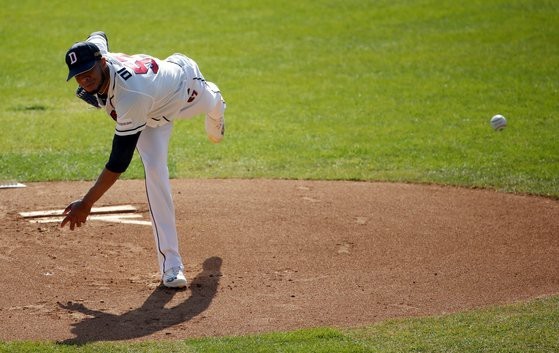 In this file photo from Oct. 24, 2021, Ariel Miranda of the Doosan Bears pitches against the LG Twins in the top of the third inning of a Korea Baseball Organization regular season game at Jamsil Baseball Stadium in Seoul. (Yonhap)
As he was watching his Doosan Bears teammates battle through postseason games this month, the competitor in the team's Cuban ace Ariel Miranda was itching to get going and join them on the field.

Miranda missed time at the end of the regular season in late October and then the early portion of the Korea Baseball Organization (KBO) postseason this month with shoulder fatigue. But instead of leaving South Korea for rehab and treatment, Miranda stayed with the club, healing and hoping that his team would last long enough in the postseason to give him a chance to pitch.

The Bears held up their end of the bargain by reaching the Korean Series. Miranda did his part by getting himself ready for the series.

And before Game 1 of that best-of-seven set against the KT Wiz on Sunday, Miranda said he couldn't wait for his turn to pitch.

"I love to compete, and it just killed me inside not to be with my teammates," Miranda told reporters at Gocheok Sky Dome in Seoul. "I worked hard at my rehab so that I could help the team in the Korean Series. I kept positive thoughts in my head all along."

Miranda led the regular season with a 2.33 ERA and 225 strikeouts, a new league record. He likely won't be able to throw 100 pitches as he routinely did in the regular season, though Miranda, a likely Game 3 starter for Game 3, insisted the pitch count itself isn't so important to him.

"I am here to help the team win any way I can," he said. "I've thrown a couple of bullpen sessions and my feel came back even quicker than I expected. I will try to throw as many innings as my body allows."

The well-traveled pitcher won back-to-back Japan Series titles with the Fukuoka SoftBank Hawks and was the runner-up in the Chinese Professional Baseball League with the Chinatrust Brothers last year.

Miranda said he feels he's due for another championship this year.

"My preparation hasn't changed much (from the previous championship finals)," Miranda said. "I just have to bear down mentally and go for my third title." (Yonhap)