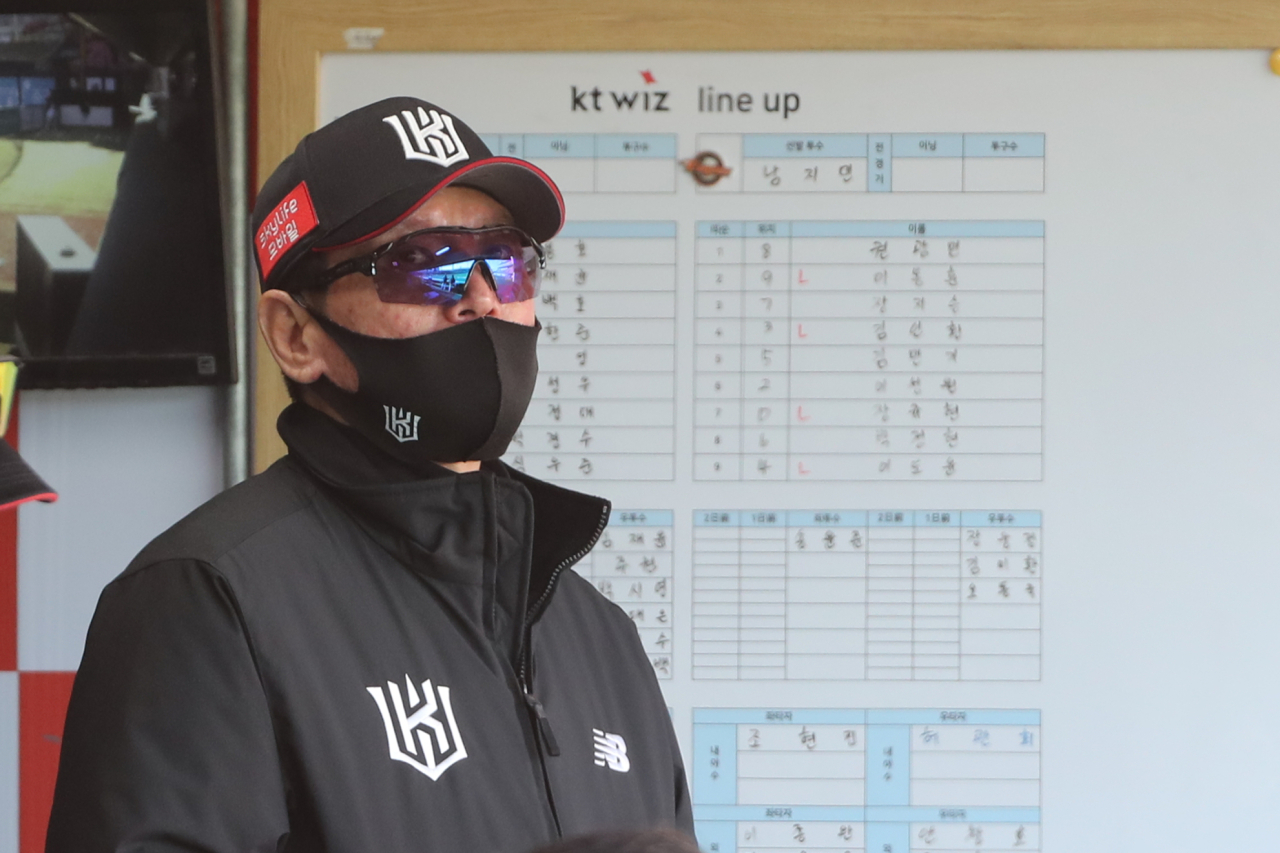 At Saturday's media day press conference ahead of the Korean Series, Lee said his club may even pull off a four-game sweep in the best-of-seven series.

"If we can grab the early momentum, then I think a 4-0 series win is possible," Lee said of the top-seeded club. "We're proud of being the regular season champions, and we'll try to create new history."

The Wiz joined the Korea Baseball Organization (KBO) as an expansion franchise in 2015 and spent most of their early years in the cellar before reaching the postseason for the first time in 2020. They lost to the Bears in the penultimate round then but will now chase their first championship against the same team.

"I don't know how the series will play out, but the shorter the series lasts, the better it is for us," said Kim, whose pitching staff has dealt with some injuries.

Accompanying Lee at the press conference, KT captain Hwang Jae-gyun said he still couldn't believe he'd finally get to play in the Korean Series in his 16th year in pro ball. After joining the Wiz in 2018, he has also had a firsthand look on the club's evolution into a contender.

"We were ninth in my first year, sixth the next season and second in my third year," Hwang said. "We finally got our first regular season title this year, and I've enjoyed this ride from the bottom. I'd love to cap it all off with a Korean Series title."

The Wiz's first baseman Kang Baek-ho, who was a rookie when Hwang signed with the club, said he had one thing on his mind once the matchup against the Bears was set: avenging last year's postseason defeat.

"It's an honor to be playing in such meaningful games, and it means extra special to go up against Doosan," Kang said. "It was an important learning experience for us to play them in last year's postseason, and now it's time for us to get our revenge."

The Bears are playing in their seventh consecutive Korean Series, a KBO record, and Kim Tae-hyoung has been at the helm for all of them. And they've taken a tougher path to the series this year than any of the previous six seasons, having finished fourth in the regular season and having had to play seven postseason games just to reach this point.

"I've been surprised myself that we've come this far," Kim said. "We were as low as eighth (out of 10 teams) in the standings midway through the season, but my players never gave up. I am so proud of them for everything they've done."

The Bears may not always have fielded the most talented team during their current run, but their core players have been credited with having the necessary intangibles to compensate for their lack of talent. First baseman Yang Suk-hwan, who was traded to the Bears in March, said he has now seen what the hype is all about.

"I think we've proven our playoff DNA by reaching our seventh straight Korean Series," Yang said. "Putting on this uniform alone is half the battle."

Catcher Park Sei-hyok has played in every Korean Series since 2017, but he's been an everyday backstop only since 2019. They won it all in that first year but finished second in 2020.

"After those two years, I think it's time for us to win again," Park said. "We all have fond memories of playing important games this time of year." (Yonhap)