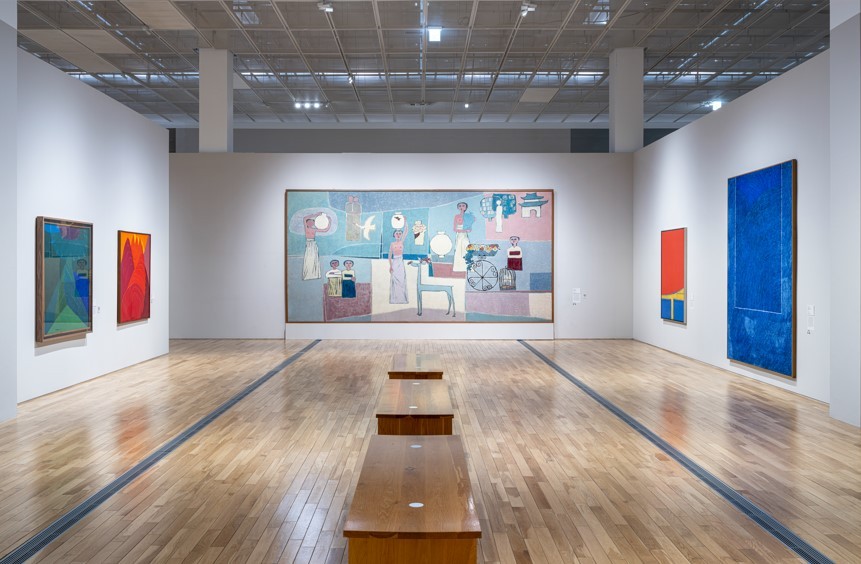 An installation view of “MMCA Lee Kun-hee Collection: Masterpieces of Korean Art” at MMCA Seoul (MMCA)
The National Museum of Modern and Contemporary Art, Korea, said Friday that it will hand over the bequest from the late Samsung Group Chairman Lee Kun-hee to the new hall that is scheduled to be built in 2027 in central Seoul. In the meantime, it is examining and cataloging the works.

“We are undertaking thorough research on 1,488 artworks from the Lee Kun-hee collection, such as the names and materials of the works and year of creation. We will finish registering them next year and share the works on our website starting in 2023,” the museum announced.

Two days earlier, the Ministry of Culture, Sports and Tourism and the Seoul Metropolitan Government sealed the agreement to build the 9,787-square-meter hall in Songhyeon-dong, Jongno-gu, to house all the donated works.

The majority of the art went to the MMCA and the National Museum of Korea, which received it in April from the family of the late Samsung Group chairman. As soon as the donation was made, MMCA Director Youn Bum-mo called it a “record-breaking donation” in South Korean art history and said it brought the museum’s collection to more than 10,000 works.

The directors of both museums had initially expressed reluctance to hand over the donated works, saying in July, “Our stance is that we keep the works that were given to the museums, which we believe is a much more efficient way to manage and study the artworks.”

The National Museum of Korea confirmed yesterday that it will move 21,600 donated items to the future donation hall and finish classifying the donations by 2025.

The two museums will jointly host a special exhibition early next year in commemoration of the first anniversary of the donation, which will tour across the country throughout 2024.

MMCA Seoul is currently showing “MMCA Lee Kun-hee Collection: Masterpieces of Korean Art” through March 2022. Reservations are required and can be booked through MMCA’s website.