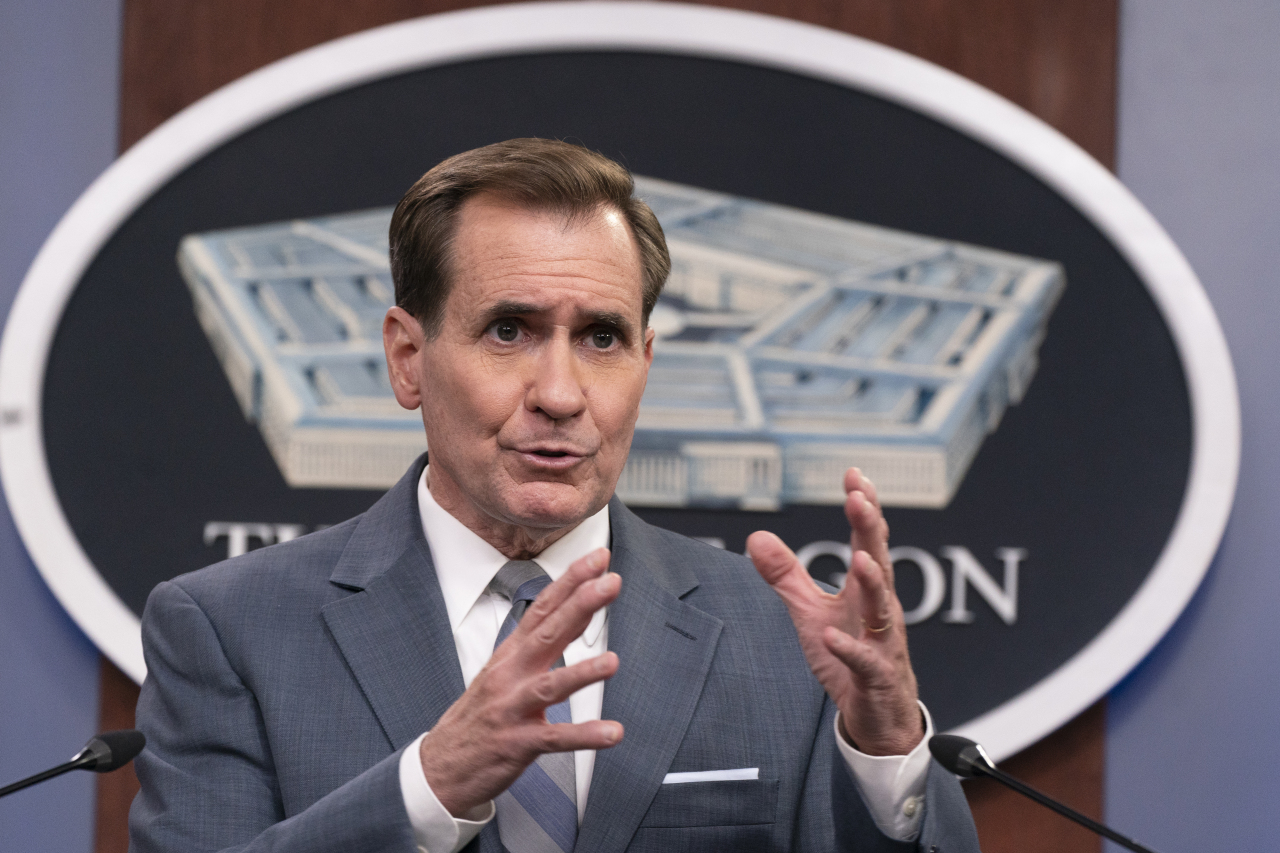 Pentagon spokesman John Kirby speaks during a briefing at the Pentagon in Washington, Monday, Nov. 1, 2021. (AP-Yonhap)
South Korea and the US have not made any decisions on when Seoul will take over wartime operational control from Washington, the US Defense Department said Wednesday, amid signs of a rift in the allies’ position on the wartime role the US first assumed in the 1950-53 Korean War.

Last week, Gen. Paul LaCamera, the US military chief overseeing the 28,500 American troops here, said the two countries could make changes to Korea’s plan to retake command by May next year or set a deadline, in what many here understood as pushing back the transfer.

President Moon Jae-in, who leaves office in May next year, pledged to complete the handover within his term, but for the last two years the allies have had to cut back on full-scale drills to test Seoul’s readiness because of the coronavirus pandemic.

“I’m not going to -- you’re asking me to assess now progress towards OPCON -- and I’m not going to do that. This is something that the alliance has to decide,” Pentagon spokesman John Kirby said in response to questions about whether more training would take place.

“The secretary and his counterpart have not made any kind of decisions on timing right now. It’s a conditions-based process,” Kirby said. The US insists on more test drills and stable regional security befitting for a command change, amid expanding military buildups by China and North Korea.

In December, Defense Minister Suh Wook is expected to “press hard” on fixing a transfer deadline when he meets his US counterpart at their annual security meeting in Seoul. Suh told lawmakers he believed that Gen. LaCamera was not hinting at delaying the handover.

“We’ve tried to see where the general was going with the words. But any commander could have said what he had said,” Suh told the parliamentary defense committee on Tuesday, adding that he will consult with the US commander and make some progress on the transfer while he is in office.

But experts said the Moon government would have to turn over work on the transfer to the next administration, and even then, agreeing on when to finish the job would be elusive unless South Korea demonstrates overwhelming readiness to contain a more assertive North Korea.

Pyongyang, which demands concessions to return to nuclear talks with Seoul and Washington, said it would bolster its defense capabilities as part of self-defense, a reference leader Kim Jong-un uses to build on the regime’s nuclear arsenal.

Kim, who previously openly tried to level with North Koreans with tears in public appearances, is seen as working to cement his grip on power as the “infallible leader,” a title North Korea’s constitution reserves for Kim Il-sung -- Kim Jong-un’s grandfather, who founded the regime -- and Kim Jong-il, Kim Jong-un’s father.