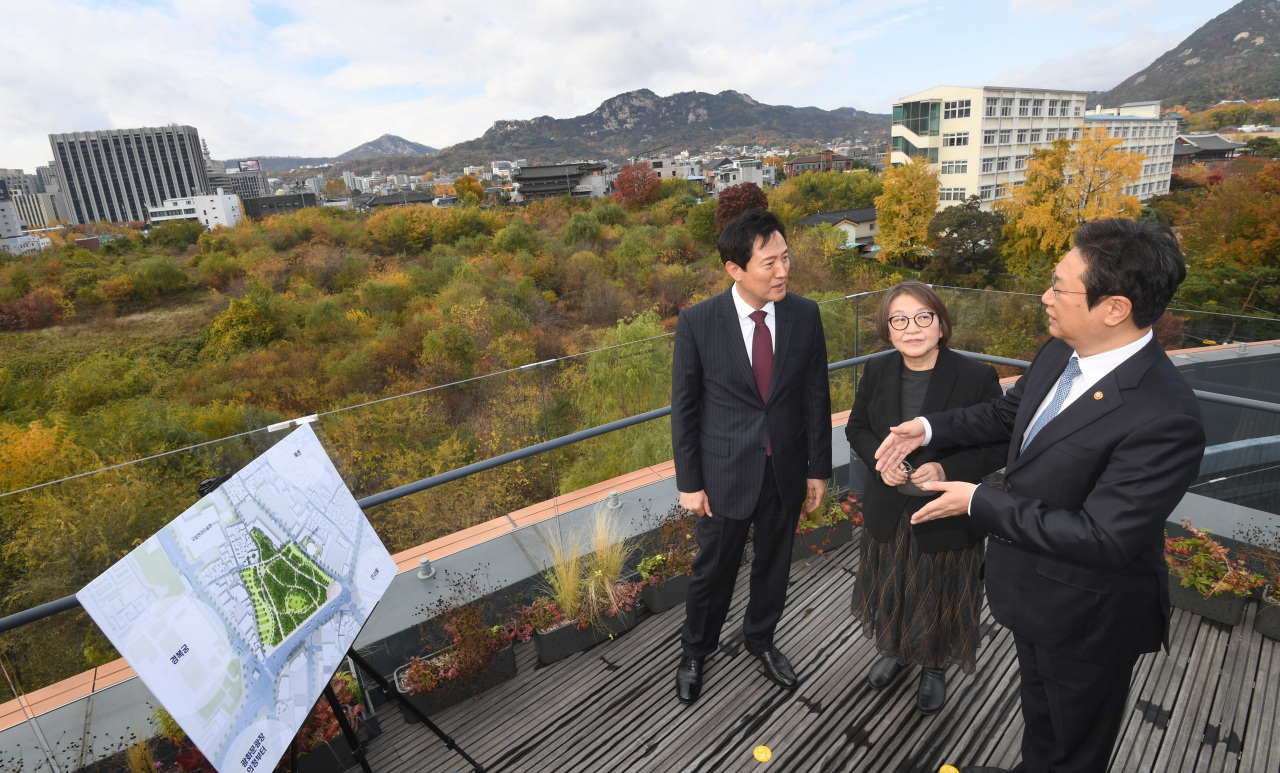 (From left) Seoul Mayor Oh Se-hoon talks with Kim Young-na, the head of an expert panel formed to make decisions about a new hall to house the late Lee Kun-hee’s art collection, and Culture Minister Hwang Hee on the rooftop of the Seoul Museum of Craft Art in Jongno-gu, central Seoul, Wednesday. The rooftop overlooks the site of the new hall. (Yonhap)
Nearly all of the artworks bequeathed by the late Samsung Group Chairman Lee Kun-hee will be housed together at the “Lee Kun-hee Donation Hall,” which is to open in Songhyeon-dong, Seoul, in 2027.

The announcement was made during a ceremony Wednesday to seal the agreement between the Ministry of Culture, Sports and Tourism and the Seoul Metropolitan Government on building the new institution in Songhyeong-dong after considering two candidate sites in Seoul.

Confusion about the identity and usage of “donation hall” arose when the Culture Ministry announced a plan to build it July. Most of the 23,000 works of art were donated to the National Museum of Korea and National Museum of Modern and Contemporary Art, Korea in April. Some 100 artworks or artifacts were given to regional art museums and Seoul National University. Lee died in October 2020.

“Although the artworks were donated to the two entities, they were ultimately donated to the country, so we came to the conclusion to establish a donation hall and gather them all together at one place. Of some 23,000 artworks, 2,500 works can be exhibited. The donation hall will present them,” said Culture Minister Hwang Hee during the press conference on Wednesday.

The 2,500 works include paintings, drawings, ceramics and metal crafts. Nearly half of the donated works are antique books, according to the Korea Art Authentication and Appraisal Research Center, one of organizations that conducted appraisals of the donated works.

Hwang added that the two museums agreed to the decision to house all bequeathed works together after discussion among members of the committee formed for the donation hall, including the directors of the two museums.

The two museums had been expressing reluctance to hand over the donated works. MMCA Korea received 1,488 modern and contemporary artworks while the National Museum of Korea received 21,600 items of various genres.

“We cannot comment on the issue because the donation hall is pushed by the ministry. It is not in our place to intervene in the matter,” an official from the National Museum of Korea told The Korea Herald.

The Museum of Modern and Contemporary Art, Korea declined to comment further except that, “We welcome another museum in Seoul.”

The bequeathed artworks and some works from the Leeum Museum of Art, run by the Samsung Foundation of Culture, will be exhibited together and go on global tours, Hwang said. Leeum could not be reached for comment.

“The donation hall will be meaningful when the donated works stay together. The donation hall will evolve as a separate museum based on Lee’s collection and we may accept other donated works afterward, but we need further discussion about how we can expand the collection of the museum,” said Kim Young-na, the head of the committee and a former director of the National Museum of Korea.

The new museum will be run as a separate entity, managed by the ministry. The staff for the donation hall, which will ultimately run as a museum, will be newly hired, according to the ministry.

An international contest for the architectural design will be held in the second half of next year, with construction possibly to start in 2025.

The new establishment will cover 9,787 square meters on a 36,642-square-meter lot that currently belongs to air carrier Korean Air. The Seoul Metropolitan Government is working on a transfer of ownership, and it plans to provide the Culture Ministry with the land for the new establishment and to turn the surrounding area into a park.

“Songhyeon-dong spot is perfect because it is near some significant and historic places such as Gyeongbokgung palace, Changdeokgung palace, Gwanghwamun plaza, the National Museum of Modern and Contemporary Art, Korea and Insa-dong. The place is expected to become a global attraction,” said Seoul mayor Oh Se-hoon, Wednesday.

Hwang declined to give the specific budget for the building of the new structure Wednesday. However, he had estimated in July that the building would cost some 100 billion won ($84.6 million).

Near the Songhyeon-dong site are renowned galleries such as Kukje Gallery, Gallery Hyundai, PKM Gallery, Hakgojae and Arario Gallery. Galleries contacted Wednesday welcomed the government’s decision on the site of the spot.

“The donation hall will attract visitors and the impact will trickle down to businesses nearby, including galleries,” said Woo Chung-woo, managing director of Hagojae. ”When the National Museum of Modern and Contemporary Art, Korea opened in 2013, it led to more people visiting galleries near the museum.”