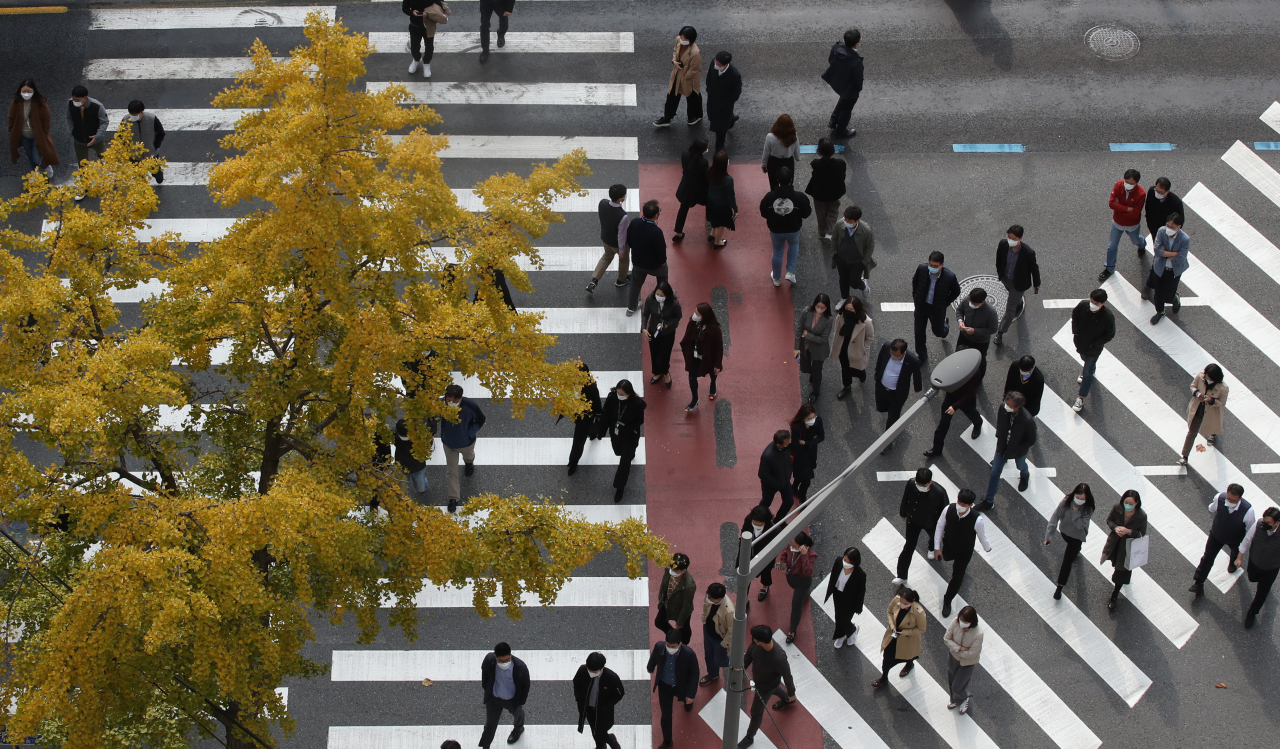 Office workers walk at a croswalk in Jongno District, central Seoul on Nov. 1. (Yonhap)
The Korea Chamber of Commerce and Industry warned on Wednesday that South Korea’s potential growth rate could drop to the mid-one percent range as a result of low birth rates and a drop in labor productivity.

In a report released on Wednesday, the chamber’s sustainable growth initiative division said South Korea’s total fertility rate hit a record low of 0.84 last year as it has been also hit with the fastest aging population among OECD members.

Combined with a drop in labor productivity in the wake of the financial crisis, these factors are slowing down the country’s potential growth rate, the chamber said.

South Korea’s potential growth rate remained at around 4.7 percent on average between 2000 and 2009 before dropping to around 2 percent this year, according to the KCCI’s latest estimate.

If the demographic change and labor productivity slump continue at their current pace for another 10 years, the potential growth rate will drop further to 1.5 percent in 2030, the report warned.

To slow down the dwindling of the country’s potential growth, the KCCI said the government should introduce new measures to help raise birth rates and encourage women’s economic participation.

“Raising child benefits or increasing the amount of child allowance depending on the number of children should be considered,” the report said.

The current child benefit scheme provides a monthly allowance of 100,000 won ($84.61) for a child below 7 years old. In Germany, the monthly child allowance for the first and second child is 219 euros per month.

Flexible work systems including remote work should be introduced more widely so women can continue to work after childbirth, the report also said.

When the women’s labor force participation rate rises from 52.8 percent in 2020 to the OCED European average of 55.3 percent, it will lead to a 0.25 percentage point increase in potential growth rates.

But fighting low birth rates will be a long-term solution rather than a short-term solution for a shrinking labor population as it will take around 15 years for a bump in birth rates to start positively affecting potential growth rates, the report said.