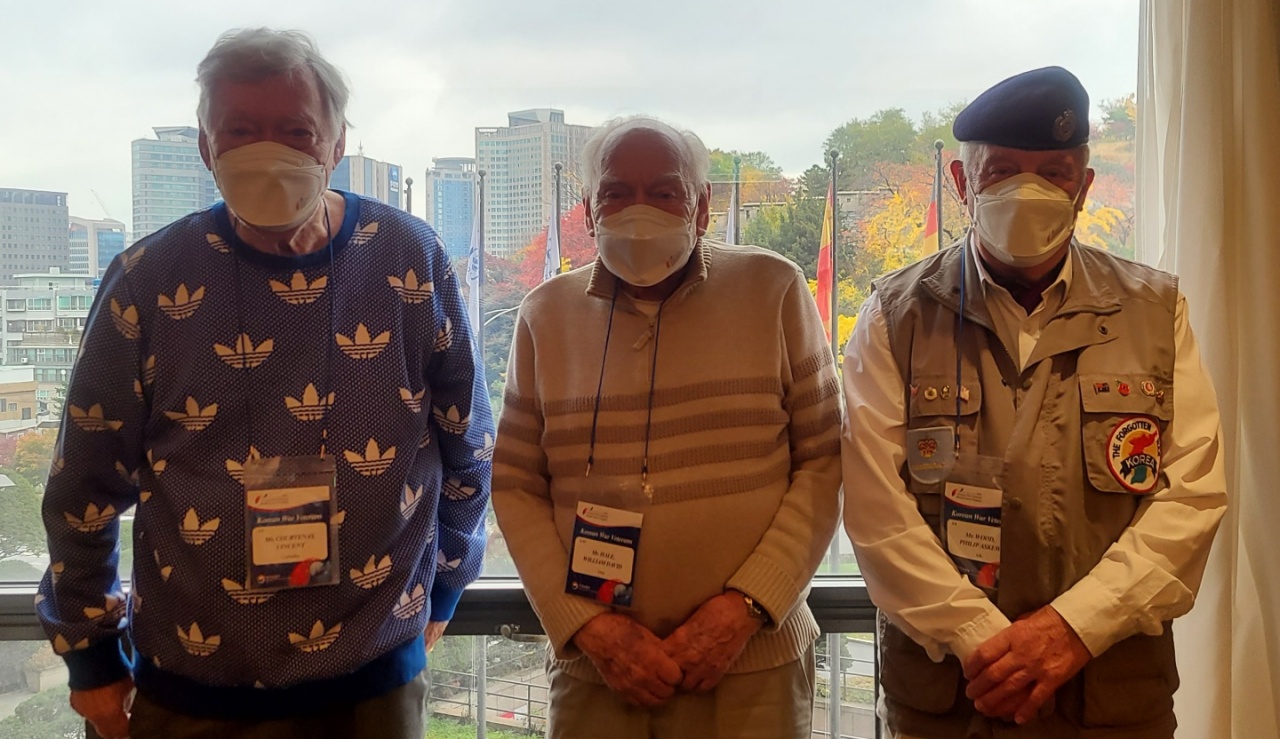 From left: Vincent Courtenay, William Hale and Philip Wood pose for a picture after an interview with The Korea Herald at Millennium Hilton Seoul on Tuesday. (Choi Si-young/The Korea Herald)
Peace comes from people and their hearts and minds, not from an organization, according to Vincent Courtenay, a Canadian veteran who took part in the 1950-53 Korean War and is visiting Busan on Thursday with fellow veterans to commemorate International Memorial Day for UN Veterans.

Courtenay was referring to President Moon Jae-in’s latest initiative to formally end the decades-old conflict that ended in an armistice, signed by North Korea, China and the US, representing South Korea and the 22-member UN forces.

Moon, who believes shaking hands on his proposal opens room for lasting peace, is trying to woo the three countries, but Pyongyang is unreceptive and Washington is reluctant. Beijing says it will do its part, though it is unclear what it wants in return for inking the declaration.

“I think it’s unnecessary. We have the military armistice agreement that has lasted for 70 years. It’s better than any armistice that was ever signed in any war,” Courtenay said in an interview with The Korea Herald on Tuesday, noting if the fighting had not actually stopped, South Korea would not be what it is today.

The 91-year-old veteran, who volunteered to fight on behalf of South Korea, said an end-of-war declaration would not be the best way to bookend the Korean War, because there had not been a declaration of war in the first place.

“They didn’t declare war on each other. North Korea invaded and we pushed them out of here,” Courtenay said.

“I can’t imagine North Korea would actually do it. He will be busy building nuclear weapons,” Hale said, referring to North Korean leader Kim Jong-un.

Pyongyang is believed to have recently resumed building weapons using its nuclear reactors, according to the International Atomic Energy Agency. Kim demands concessions to return to denuclearization talks, saying he will expand defense capabilities in the meantime.

“Can they see it happening?” Wood posed, referring to South Koreans who he said would be those most affected by the change. A September poll found 7 out of 10 Koreans in favor of the proposal, though most of the 1,000 adults surveyed did not expect to see a breakthrough in inter-Korean ties.

“Your country would like it to happen. I don’t think it will happen,” Wood said, noting no one knows what goes on in Kim Jong-un’s mind. Kim, who once openly tried sympathizing with North Koreans, is now seeking to cement his singular rule, as the “infallible leader.”

Meanwhile, all of the veterans said they were grateful to the South Korea’s Veterans Ministry for reaching out to them even after the war ended decades ago to recognize their service.

Courtenay, who joined the Canadian Army when he was 16, said he would make the same decision again to help South Korea fight the North Korean attack, describing the choice as “something honorable.” Someone needs to do it, he said.

Wood, a 91-year-old veteran who took part in the Korean War as a sapper, or a military engineer responsible for clearing minefields, said his brother inspired him to fly to Korea, but everyone at the time was where they were supposed to be. “We had done well,” he said.

Hale, 89, said he was humbled every time he met Koreans who thank him for his service. The former US Marine said he was overwhelmed when he made his trips here after the war, because Korea today stands in stark comparison to what it was back then, or “rubbles” as he called it.

On Thursday, the veterans will join a ceremony the Veterans Ministry is holding in Busan to thank UN veterans. The city houses a cemetery with 2,311 war dead from 11 countries. A moment of silence to pay tribute to the fallen soldiers will take place.

Courtenay, who first suggested the one-minute practice to remember each sacrifice, said the veterans will have to carry the burden of their sacrifice through the rest of their lives. But they learn to adjust and be “sort of normal” again, he added, because they know peace was earned.