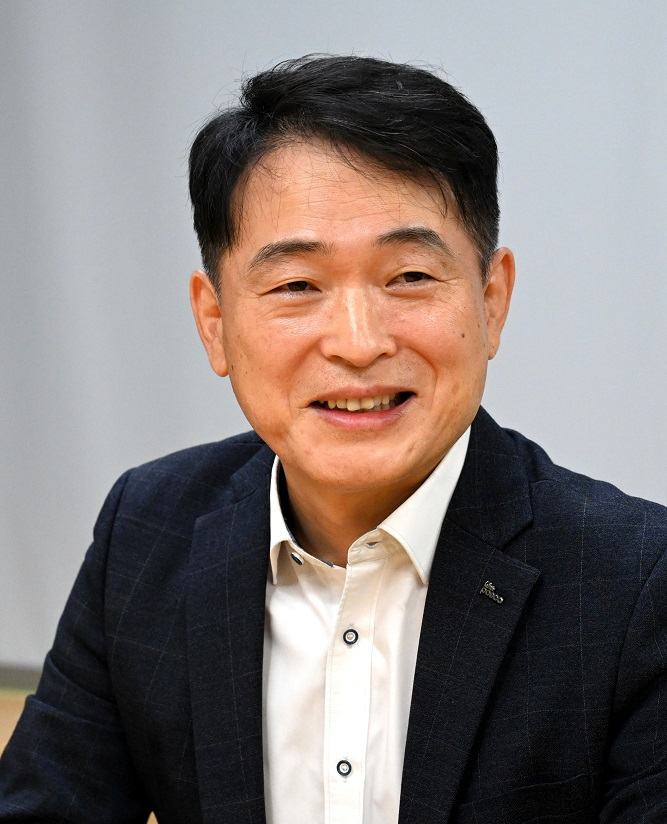 Cho Ju-ik, the head of the hydrogen business at Posco (Posco)

Steel emits less carbon than diapers per ton of production.

Due to its staggering size of production, however, steel is responsible for roughly 8 percent of the world’s carbon emissions and has been blamed as the main polluter driving up the planet’s temperature.

Posco, the South Korean steelmaker, was the country’s greatest emitter of carbon last year. It discharged more carbon than it was allowed to by regulations, and even accrued debt worth 78.6 billion won ($66.4 million) for failing to meet the cap.

Sensing an existential crisis, the company has pledged a whopping 40 trillion won investment to overhaul its entire infrastructure built on coal and migrate to hydrogen-based green steel by 2050.

During an interview with The Korea Herald, Cho Ju-ik, the head of hydrogen business at Posco, underscored the necessity of the transition but acknowledged key challenges that lie ahead.

“For centuries, steelmakers utilized blast furnaces. This method required coal and carbon emissions were inevitable. To steelmakers, carbon neutrality entails a complete transition to a whole new different production method, and those who stick to the conventional way and fail to keep up with the trend will become thing of the past,” Cho said.

At the moment, 70 percent of the world’s steel is produced by blast furnaces. At the bottom of the furnaces, coal is burned to raise the temperature and generate carbon monoxide. When carbon monoxide meets with iron ore, oxygen is stripped away and metallic iron is born.

This coal-driven process is carbon intensive. The idea is to replace carbon monoxide with hydrogen, which can also react with iron ore and take away oxygen, generating water as a byproduct instead of carbon.

Even if the technology is ready three decades later, commercialization is a different story, Cho explained.

“Hydrogen-based steel utilizes hydrogen as a raw material instead of coal, so the price of hydrogen is the key factor. However, hydrogen is a new energy source, so it’s difficult to predict how much it will cost in the future,” said the executive.

The problem is, Korea has unfavorable natural conditions to produce clean hydrogen, and has to import it from overseas. Compared to European competitors, which can source clean hydrogen locally thanks to abundant renewable energy, Posco might find itself at a disadvantage in terms of price competitiveness.

“In Korea, the price of renewable energy is expensive, so the price of clean hydrogen is expensive too. We have no choice but to source (clean) hydrogen from overseas. This might undermine the price competitiveness of Korea’s steel products in the global market,” he said.

The Posco official expects green hydrogen, in particular, will become mainstream in the future. The invisible gas gets the green color code when it is produced by breaking water into hydrogen and oxygen using electricity generated with renewables and therefore doesn’t emit any carbon. Without green hydrogen, hydrogen-based steel can’t become truly clean.

When Posco’s hydrogen-based steelmaking technology is fully commercialized in 2050, the company will need 3.7 million metric tons of green hydrogen. To secure a stable supply of green hydrogen at cheap price, Posco plans to establish overseas production bases where solar and wind power are plenty.

“Posco will set up (green hydrogen) production bases in Australia, India, the Middle East and Southeast Asia. The (green) hydrogen will be imported in the form of liquid ammonia, and Posco will set up terminals in Pohang, North Gyeongsang Province, and Gwangyang, South Jeolla Province. Also, we are reviewing additional terminals on the eastern and western coasts to supply (green) hydrogen to other industries,” Cho said.

Despite Posco’s full-fledged transition to hydrogen-based steel, the strategy could have a trade-off -- quality control.

Steel produced from blast furnaces contains few impurities and therefore is adequate for automobiles and consumer electronics. Hydrogen-based steel, though eco-friendly, contains more impurities so it may be unsuitable for high-value products.

It remains to be seen how Posco will compensate for the downsides of hydrogen-based steelmaking.