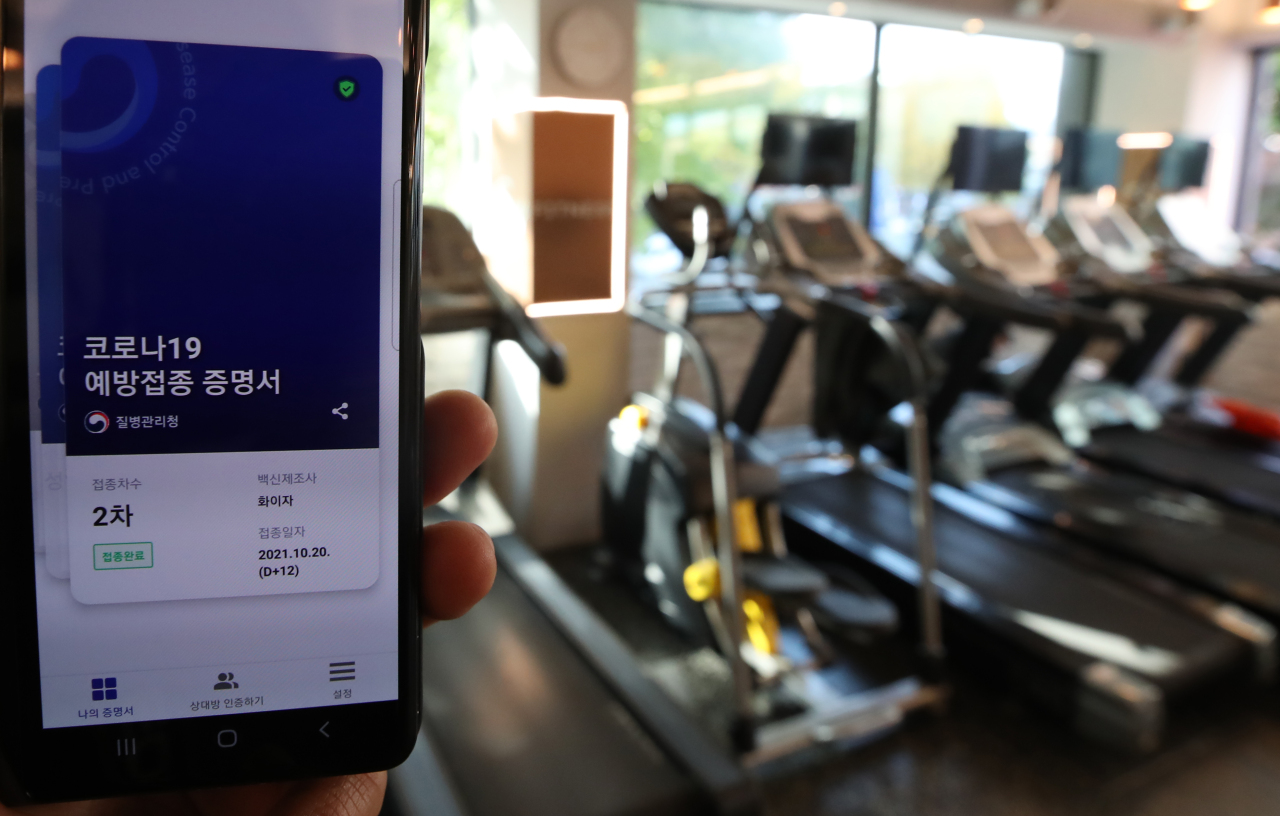 The government’s certification of full vaccination is shown on the screen of the smartphone at an indoor gym in Seoul on Nov. 1. (Yonhap)
A week into the government’s “living with COVID-19” drive, the “quarantine pass” system remains dogged by controversy.

A full vaccination certificate, a negative PCR test result, or confirmation of exemption from vaccination, is required for entry to places deemed “high risk,” such as karaoke parlors, indoor sports centers, nightclubs and public bathhouses.

“The number of customers already dropped after the fourth level of social distancing measures (since July) were implemented. I was hoping to see a turnaround when I heard the news of moving toward ‘living with COVID-19.’ But with the implementation of ‘quarantine pass,’ I don’t see any hope,” said Kim Deok-ja, who runs a public bathhouse in southern Seoul.

“Although some older visitors are fully vaccinated, they have a hard time getting their QR codes. They don’t want to go through all the hassle.”

She questioned how many unvaccinated people would want to go to a public bathhouse if they are required to take a PCR test.

The quarantine pass rule is also applied when visiting hospitals, care facilities and places that are used by elderly and disabled people.

Although the new scheme had a grace period of one to two weeks from Nov. 1, operators of the high-risk facilities immediately raised objections to the government’s implementation of the quarantine pass system.

Indoor sports associations on Wednesday took the matter to the streets to stage a protest in front of the headquarters of the ruling Democratic Party in western Seoul. They criticized the government for targeting their businesses without properly defining high-risk facilities, claiming that the wearing rate for masks is higher in gyms than in cafes or restaurants.

Following the street demonstration, a group of 350 people in the indoor sports sector filed a damage suit against the government for the losses they had to suffer due to the state-level gathering ban and operating hour limits.

“They are ensuring the right to daily life only for the majority who are vaccinated. I think the restrictions are too severe for those who cannot receive a vaccine due to various reasons or those not willing to get a jab,” a personal fitness trainer surnamed Choi, who operates a gym in Jeonju, told The Korea Herald.

Since the implementation of the quarantine pass system, some customers who have yet to be fully vaccinated canceled their workout schedule, Choi said, and others have asked him to block unvaccinated people from coming to the gym. There were many refund requests, he added.

“It has been nearly two years since we started working out indoors while wearing a mask. Although people take off their masks when they are in other places such as cafes and restaurants that are used by many, wearing a mask is emphasized the most at gyms,” Choi said.

“For me personally, I spend more time in cafes and restaurants. I don’t spend that much time working out.”

Based on the argument that eating was an essential activity, the government left cafes and restaurants off the list of facilities that require the quarantine pass system. As these places still have a high risk of infection, health authorities decided to limit the number of unvaccinated people who visit cafes and restaurants up to four per group to reduce the risk of virus spread.

“If the quarantine pass system was announced for restaurants, I think I would have agreed with it. It would rather make me feel relieved. I feel a little worried when I have many customers because I always deal with a lot of people,” said a restaurant owner in Seoul whose last name is Jung.

“I would not have agreed to it if the policy was carried out with a low vaccination rate. But if it is implemented with the current high vaccination rate, it isn’t a big deal. Operating hour limits are a bigger factor for me.”

Even as the owner of a restaurant, Jung said the current policy was ambiguous as to how it is applied to only certain businesses.

“People are not wearing masks at restaurants and pubs. They talk a lot. So how is that fine (there) and not OK (at gyms)? I think the criteria are vague,” he added.

Despite the criticism, the government reaffirmed that the quarantine pass system was necessary to curb the spread of the virus and achieve a safe return to daily life. The system will be lifted in phases as the country moves closer to normalcy, it added.

“The owners of fitness centers can clearly feel that it’s unfair because masks are taken off in restaurants, which is more dangerous. They could question why the government says gyms are risky even with masks on,” said Dr. Chun Eun-mi, a respiratory disease specialist at Ewha Womans University Medical Center.

After the grace period ends, users who violate the quarantine pass system will face a fine of 100,000 won ($84). For business operators, a violation will result in a fine of 1.5 million won and the fine will go up to 3 million won after the first offense.