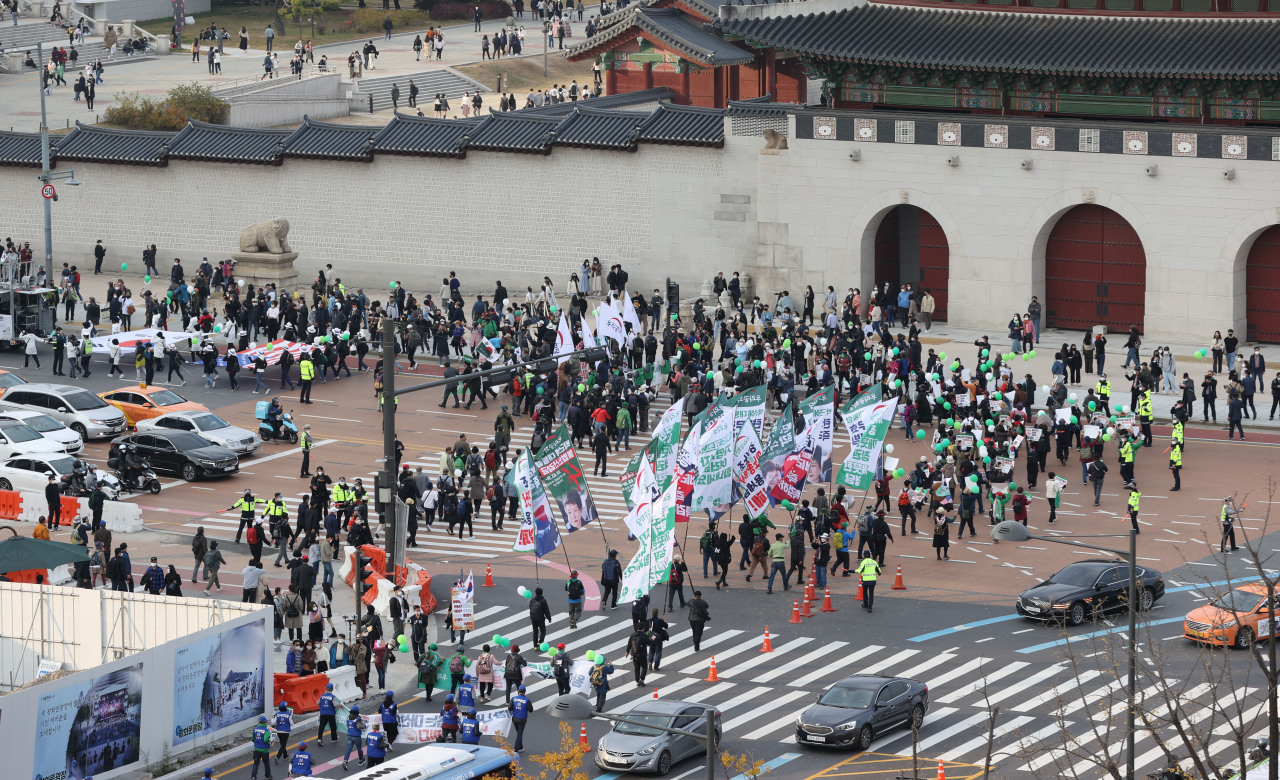 Protesters hold rallies at Gwanghwamun Square on Saturday. (Yonhap)
The number of seriously ill COVID-19 patients has risen steadily since Nov. 1, when rules were eased for public gatherings and working hours at public facilities such as restaurants and cafes.

The change came into effect as part of a step-by-step transition by health authorities to remove all restrictions by February. This weekend some 3,000 South Koreans attended rallies in downtown Seoul, while many others took advantage of the increased freedom in public places.

But Korea is seeing an increasing number of critically ill patients who need ventilators. As of midnight at Saturday, the number was 405, up from 343 a week prior. Newly diagnosed infections on the day stood at 2,224, with the tally hovering around 2,200 for five consecutive days.

While the weekend rallies and gatherings were not believed to be responsible for the spike, the government has already asked some 80 hospitals nationwide to prepare more beds to treat COVID-19 patients -- the third time it has made that request, having previously done so in December last year and August this year.

But beds alone would never relieve the extra workload health professionals could face, experts said, adding it is only a matter of weeks, not months, before the number of new cases hits 5,000 per day, half the number the government said it would be able to handle.

“As long as the number of health professionals stays the same, nothing really changes” said Chun Eun-mi, director of the respiratory center at Ewha Womans University Medical Center. She referred to increased passenger flight bookings, which she said would spike infections.

According to the Transport Ministry, domestic travel reached pre-pandemic levels with about 3 million passengers using the airlines, while international travel is showing signs of a slow but steady recovery. Travel to tourist spots like Guam and Saipan in particular has been expanding.

“At this rate, 5,000 a day is nothing. The number could shoot up even more. We should not forget that this transition we started a week ago could all come to a stop. The government should make that crystal clear,” Chun said, urging the government to rethink home care for patients with mild symptoms.

The respiratory specialist said home care works best if patients have antiviral pills to take at home, like the flu medicine Tamiflu. Until then, hospital care will prevent deaths from mild symptoms left untreated at home.

The Health Ministry, which reiterated that it will use home care to back the transition, said it will secure enough antiviral drugs to treat about 400,000 patients by this month, noting it was in talks with Pfizer, Merck and Roche.

A Health Ministry official said the infection tally is expected to rise in the coming weeks, adding that upticks are widely seen in the first two months when any country starts to phase out COVID-19 curbs.