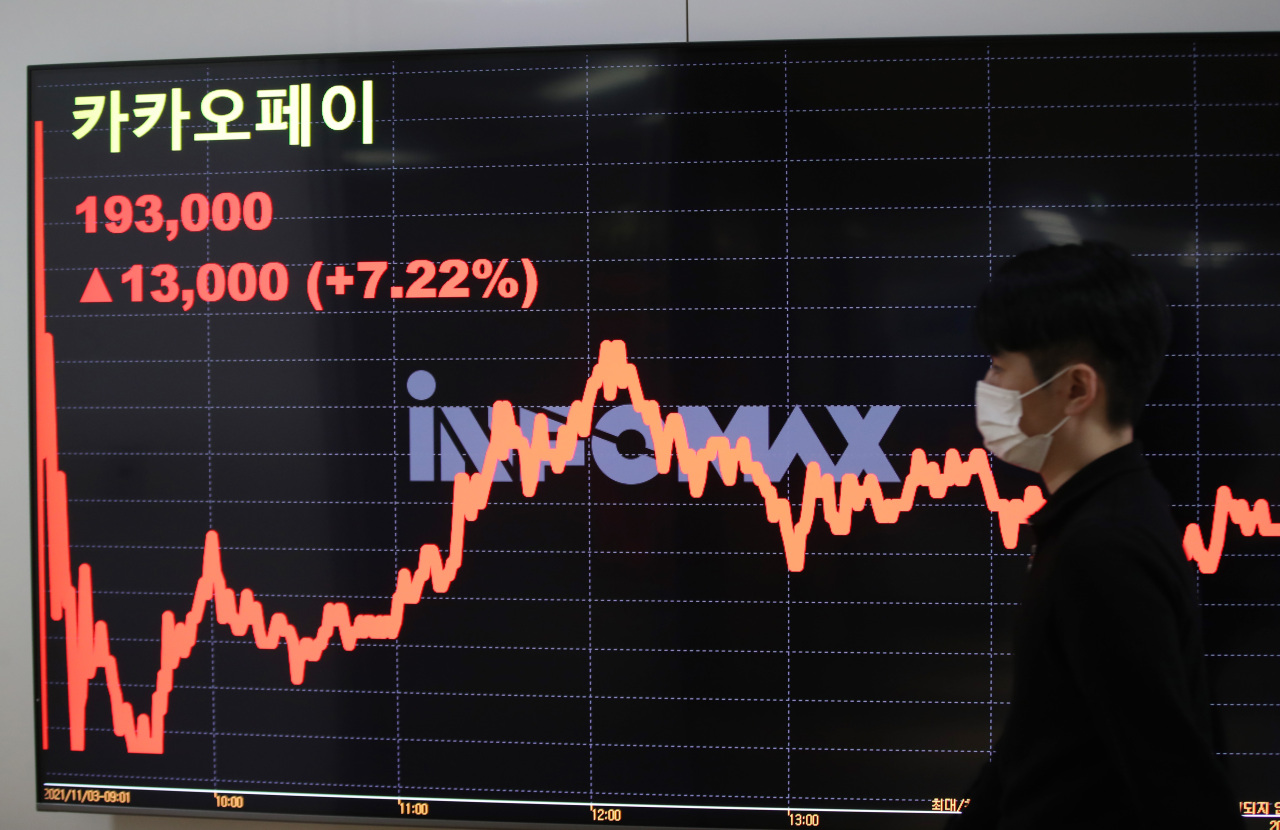 A screen shows stock price fluctuations for Kakao Pay, which went public Wednesday. (Yonhap)
Stocks that began trading through blockbuster initial public offerings this year might see a downturn in stock prices as lockup periods that hindered large shareholders from selling expire this week, according to market insiders Sunday.

A stock lockup is a device to prevent large shareholders from selling their shares too quickly and causing a sudden change in stock prices after a company goes public.

Institutional investors are expected to trade roughly 11 trillion won ($9.3 billion) worth of shares of Kospi debutants this year, combined, they said. The list includes KakaoBank, Krafton and SKIET.

KakaoBank’s existing shareholders -- such as game company Netmarble and Skyblue Luxury Investment, an affiliate of Tencent Holdings -- will then be free to sell their collective 20.3 million shares. Those shares are worth 1.2 trillion won combined, calculated by the closing price of 57,200 won per share on Friday.

Starting Nov. 10 after a three-month lockup, game giant Krafton’s large shareholders are free to sell their 4 million shares. The assets were worth 1.8 trillion won as of Friday’s close at 451,000 won per share.

SKIET, a battery materials subsidiary of SK Innovation, is likely to see a higher fluctuation in its stock price than KakaoBank and Krafton, according to experts.

With its six-month lockup ending Nov. 11, the company’s large shareholders will be able to sell off their 52.9 million shares, worth 7.7 trillion won, calculated by Friday’s closing price of 145,500 won per share.

“Since the transaction volume of SKIET had already fallen to almost half of that from August, institutional sell-offs would bring greater shock to the stock price. The second-largest shareholder, Premiere Superior, holds 8.8 percent of shares and currently logs 200 percent of the profit rate (and is highly likely to sell its shares),” Ko Kyung-beom, a researcher at Yuanta Securities, said in a report.

Market insiders warn that once the lockup periods end, the IPOs’ initial pop -- driven by pandemic-led liquidity -- will fade away. Companies that made their market debuts this year with high IPO prices relative to their fundamentals might see their stock prices take a deep dive and incur heavy losses for retail investors, they said.