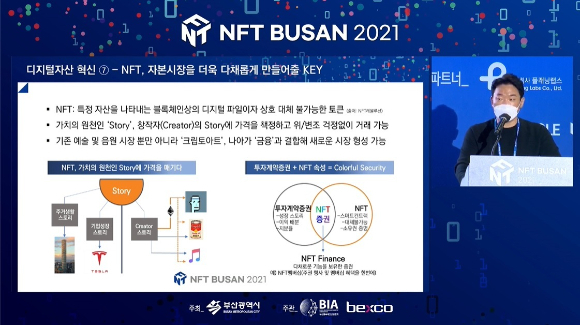 Lee Yong-jae, a manager at Mirae Asset Securities, talks about NFTs and its potential for financial companies on Thursday during NTF Busan. (NFT Busan)
Rather than discussing the question of whether non-fungible tokens are a fad, traditional financial institutions are instead asking how they can be incorporated within their business models, according to speakers from major financial firms who gathered at a three-day conference on NFTs.

The tokens are digital counterparts of real-world assets, largely visual art and music. More importantly, each NFT is unique, with ownership being traced and protected through blockchain technology. Given that the NFT market more than doubled in size between the second and third quarter of this year alone, it has now become “too big to ignore.”

Indeed, this sentiment was echoed by officials from Shinhan Bank, Hanwha Asset Management and Ground X, a blockchain arm of Kakao Corp. who spoke during Thursday sessions of NFT Busan 2021, a conference hosted by Busan Metropolitan City.

Given that the digital asset market will undoubtedly continue to grow and evolve, the synergy of these two radically different company types could well result in a killer application, he said.

“We are not just talking about institutional investors buying bitcoin as part of their own portfolios, but rather the purchasing of cryptocurrencies and other digital assets as part of client portfolios as well.”

Kim Won-sang of Ground X also discussed the future of cryptocurrencies, stating that “digital banks, regardless of the efforts they make, are still just banks. The financial industry will remain limited, unless these banks can find a way of not only having a slice of the pie, but rather making the whole pie bigger.”