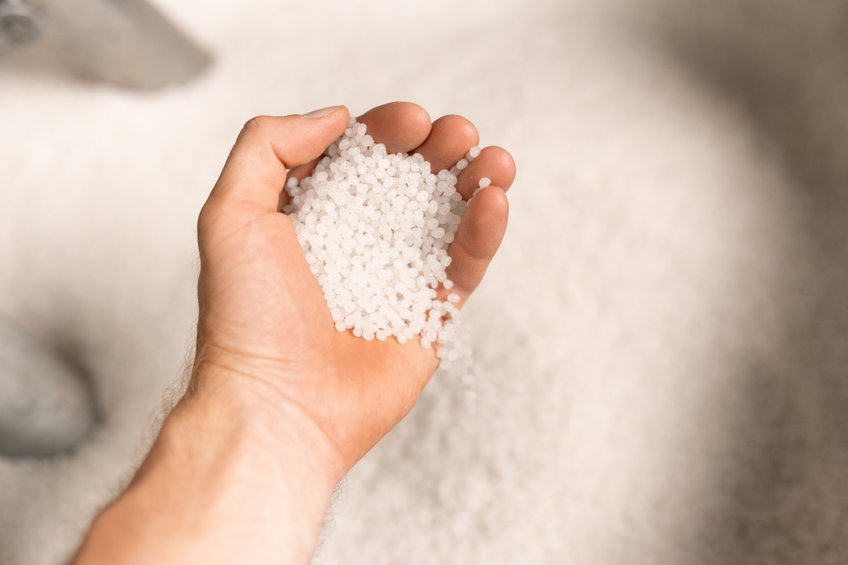 A rendered image shows a hand of a young male worker of large modern factory holding polymer granules. (123rf)
Convenience store chain operator BGF has confirmed Friday its plan to acquire a stake in engineering plastic resin maker Kopla for at least 180.8 billion won ($152.6 million), in a strategic move to enter into a new business, sending its shares jumping nearly 30 percent at some point.

According to filings with the Financial Supervisory Service, BGF is poised to acquire 11 million common shares of Kopla from Kopla President Han Sang-yong and his affiliated parties and through a new rights offerings by December this year, which will enable BGF to exercise 44.34 percent of its voting rights.

The terms also indicate that BGF will inject 69.1 billion won of investment in mezzanine bonds such as bond warrants and convertible bonds issued by Kopla before end-2021.

As a result, BGF may opt to increase its ownership of Kopla to up to a controlling 57.9 percent by December 2024.

BGF’s combined 250 billion won investment is the largest since the operator of convenience store franchise CU adopted a holding company structure since 2017.

Following the announcement, the share price of BGF, trading on the Korea Exchange, hit the price ceiling immediately in early morning trade Friday. It narrowed down the gains in the afternoon session, trading roughly 5 percent higher than the previous session‘s close as of 1 p.m.

Shares of Kopla, dedicated to high functional polymer materials, surged to an all-time high on the KRX’s development board Kosdaq Friday morning to the daily price cap, which allows a listed share to be trading up to 30 percent higher than the previous closing. This brought Kopla‘s market cap to 250 billion won.

BGF is a parent of BGF Retail, which operates CU, Korea‘s largest convenience store chain by number of stores. The holding company also owns BGF ecobio, which is dedicated to foaming polylactic acid, a material alternative to petroleum-based plastics.

The acquisition deal will lay a groundwork for BGF‘s long-term growth of its post-consumer recycled plastic business in the group’s goal of achieving the circular economy, BGF said in a statement.

Kopla was founded in 1997. Kopla‘s first-half operating profit came to 10.3 billion won, up nearly threefold year-on-year. Its products, ranging from polyamide 66 to polyamide 6 and polypropylene, are applied in components of cars and electronic devices. Among them, its polyamide 66 product is responsible for half of the company’s revenue. The company is based in Hwaseong, Gyeonggi Province.