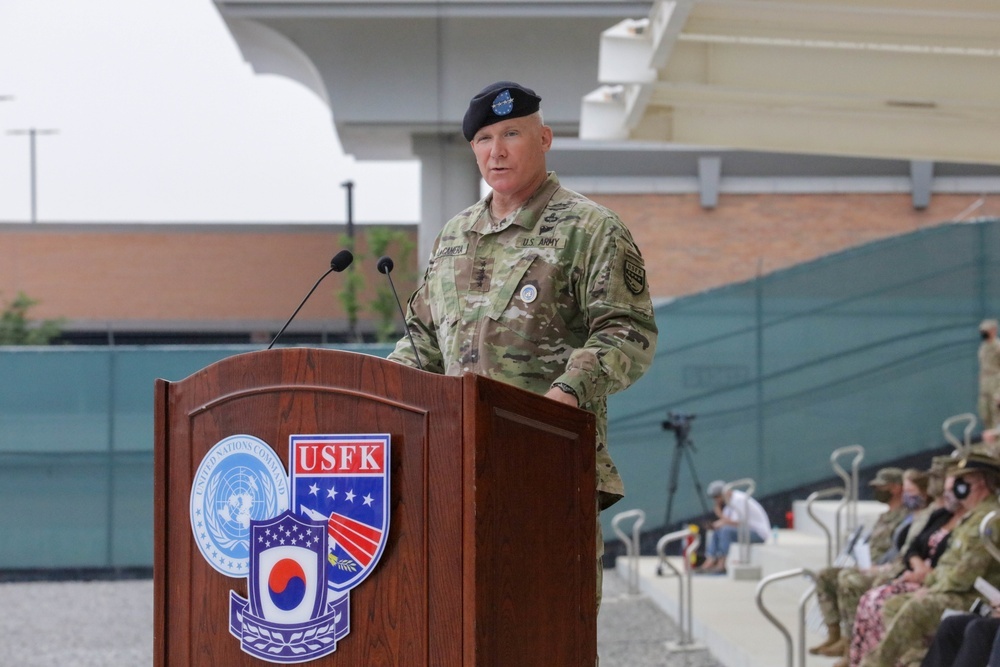 Gen. LaCamera, commander of United States Forces Korea, speaks during a change of command ceremony on July 2, 2021 at Barker Field. (USFK/Disclaimer: The appearance of US Department of Defense (DoD) visual information does not imply or constitute DoD endorsement)
South Korea and the US are still working for Seoul to take over wartime operational control of the joint military forces from Washington by the time they had agreed, the Ministry of National Defense said Thursday in response to the top US general who hinted at a delay.

“We will have to look at what exactly the US commander said, but the bottom line is that the transfer is taking place as scheduled, as agreed by both our commanders-in-chief,” ministry spokesperson Boo Seung-chan said.

Earlier in the day, Gen. Paul LaCamera, the US military chief overseeing the 28,500 American troops here, said the allies could make changes to South Korea’s plan to retake the wartime role by May next year or set a transfer deadline.

President Moon Jae-in, who leaves office in May next year, pledged to complete the handover within his term, but for the last two years the allies have had to cut back on full-scale drills to test Seoul’s readiness because of the coronavirus pandemic.

Washington is wary of a rushed decision, saying test drills as well as stable regional security befitting for a command change are crucial. The US is seen as reversing its earlier position to facilitate the transfer as it expands efforts to contain Chinese and North Korean military buildups.

“So as we move forward with our plan, we will adjust,” LaCamera added without elaborating at a webinar hosted by the Korea Defense Veterans Association and Korea-US Alliance Foundation.

It was the first time a sitting US commander openly backed what many here understood as pushing back the handover until conditions are met. Gen. Robert Abrams, who preceded LaCamera and did initial work on the transfer, said he had never been informed as to when it should come to an end.

In December, Defense Minister Suh Wook is expected to “press hard” on fixing a deadline when he meets his counterpart at their annual security meeting in Seoul.

A civilian-led panel has recently advised the military to grant them unrestricted cellphone access as part of efforts to better respect soldiers’ rights. In October, the panel ended its five-month work on recommending ways to do away with rights violations and abuse taking place within the military.

“There are pros and cons to the change and we will go over the results from our trial runs, which aren’t finished yet. We will look at them from every angle before making a final decision,” the ministry said.