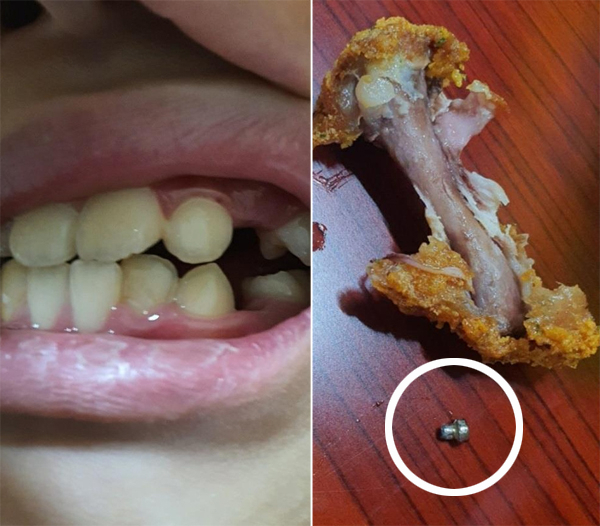 A photo of the 12-year-old boy's gums and the problematic chicken wing. (Yonhap)
A boy was reportedly injured from biting into fried chicken that had a metal screw in it, sold from a local franchise.

According to local media reports Wednesday, the boy, 12, had to have two teeth pulled out after a screw found inside a chicken wing became stuck in his gums.

The chicken was reportedly from a major Korean fried chicken franchise brand.

Included in the media reports were a photo of the boy’s bloody gums and a doctor’s note showing the boy had two of his teeth removed from the incident.

While the event happened in August, it came to media attention this week due to a dispute over compensation.

According to reports, the fried chicken chain in question conducted an internal investigation in September to verify the family’s claim and, if it proved to be true, to determine how the screw got into the food.

The owner of the franchise location claimed the specific type of screw found in the chicken had never been used at his store. Early on, the store owner reportedly offered 100,000 won ($85) in compensation to the family, but was turned down.

The store’s insurance company is said to be investigating the case now.

While the chicken franchise said it was not liable for the incident, it reportedly apologized and is said to be mulling compensation for the family.