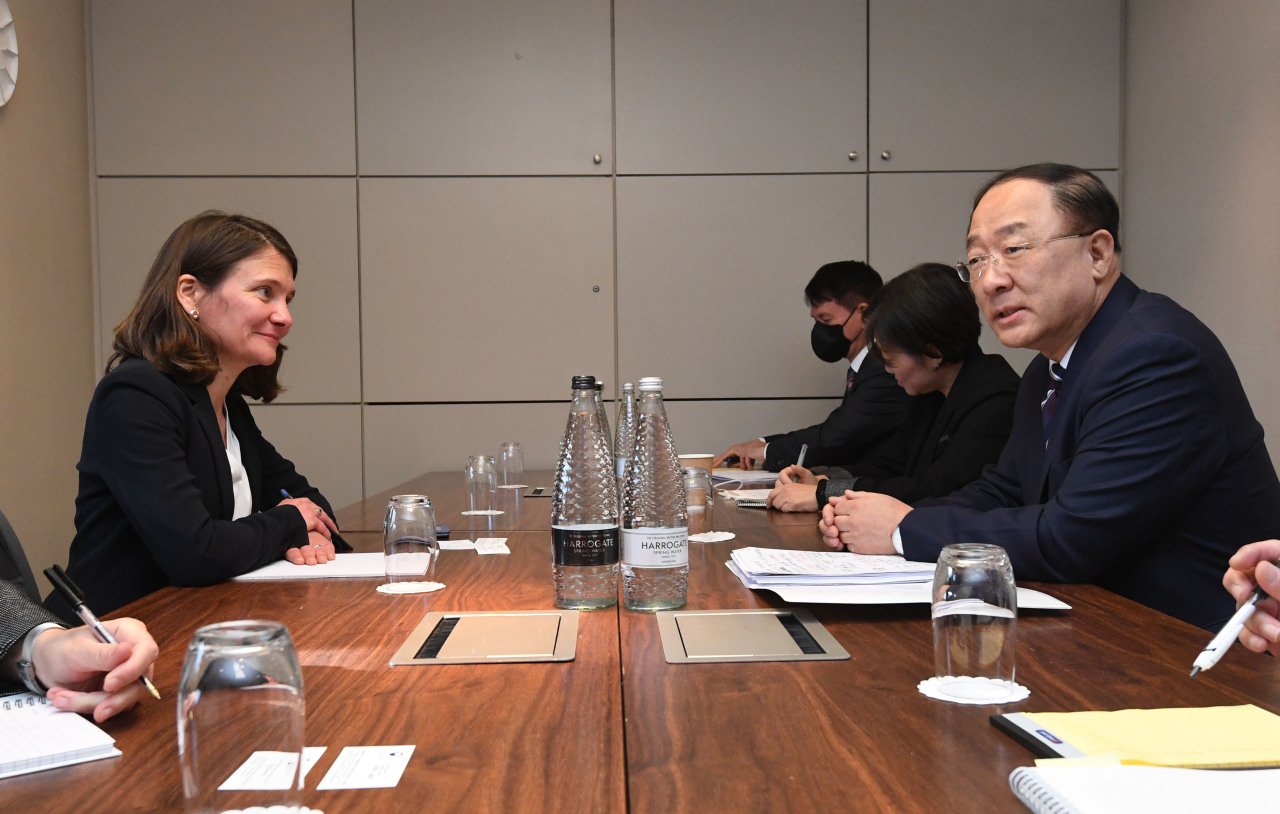 This photo, provided by the Ministry of Economy and Finance on Wednesday, shows Finance Minister Hong Nam-ki (R) having talks with Marie Diron, managing director of the sovereign risk group at Moody's Investors Service in London. (Yonhap)
South Korea's finance minister has said the country's economy is expected to extend its recovery momentum on the back of the accelerating COVID-19 vaccine rollout and efforts to gradually return to normal life.

Finance Minister Hong Nam-ki made the remarks during his meeting with Marie Diron, managing director of Sovereign Risk Group at global credit appraiser Moody's Investors Service, in London on Tuesday (local time), according to the finance ministry.

The meeting was held to discuss South Korea's economic situations, as Hong was visiting London to hold an investor relations session with global investment banks.

Hong said the government will mobilize all policy means to help achieve its 2021 economic growth target of 4.2 percent in a bid to support the economic recovery momentum, according to the ministry.

On Monday, South Korea began to implement the "living with COVID-19" scheme in a bid to gradually phase out anti-virus restrictions for a return to normal life. Under the scheme, COVID-19 is treated as an infectious respiratory disease, like seasonal influenza, with eased virus curbs.

The country's economic growth slowed to a 0.3 percent on-quarter gain in the third quarter from 0.8 percent growth in the second quarter due to the resurgence of COVID-19 cases. But the government expects consumer spending will likely rebound with eased social distancing rules.

The government proposed a record high budget of 604.4 trillion won ($513.7 billion) for next year to maintain its expansionary fiscal policy. Its national debt is forecast to reach 1,068.3 trillion won next year and the debt-to-GDP ratio will hit 50.2 percent, according to the ministry's estimate.

In May, Moody's maintained its credit rating on South Korea at "Aa2," the third-highest level on the company's table, with a stable outlook.

The government plans to hold its annual consultation with Moody's in the first half of next year. (Yonhap)