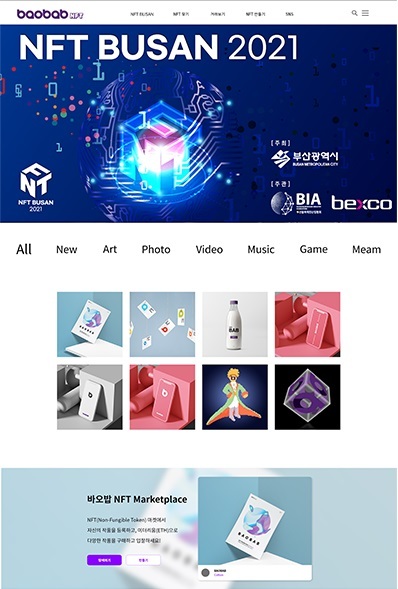 The platform, named Baobab NFT, can be accessed through the firm’s blockchain portal and website at bao-bab.co.kr. Through the marketplace, Ethereum- and Klaytn-based NFTs can be issued, sold and purchased with crypto and NFT wallets MetaMask and Kaikas. Klaytn is Korea’s No. 1 mobile messenger operator Kakao Corp.’s global blockchain project.

The marketplace will also allow users to participate in auctions if they are dissatisfied with the NFTs’ initial price. The transaction fee or so-called “gas fee” is to be set at a similar level with the world’s largest NFT marketplace, OpenSea.

The marketplace has been selected to be presented at NFT Busan 2021, a blockchain startup fair hosted by the city of Busan and organized by the Busan Blockchain Industry Association. The fair is scheduled to take place in Bexco, a convention center in the South Korean port city from Thursday to Saturday.

Baobab partners plan to organize the marketplace launch both offline and through the “metaverse.” The firm also plans to present its own motion-tracking technology at the fair, which makes users feel they are in a less restricted environment in the virtual reality world.

“While the local NFT market is at its beginning stage, it can grow to be the blockchain ecosystem’s new growth engine,” Choi Jin-bum, founder and CEO of Baobab Partners said in a statement.

“By running joint projects with the city of Busan, we plan to develop and launch new digital businesses including the converging of NFTs and metaverse, which will bring new waves of changes.”

An NFT, a unit of data stored on a digital ledger, has been gaining global popularity as a way for people and companies to use the blockchain technology to buy and sell ownership of digital assets, ranging from works of art to games and videos.