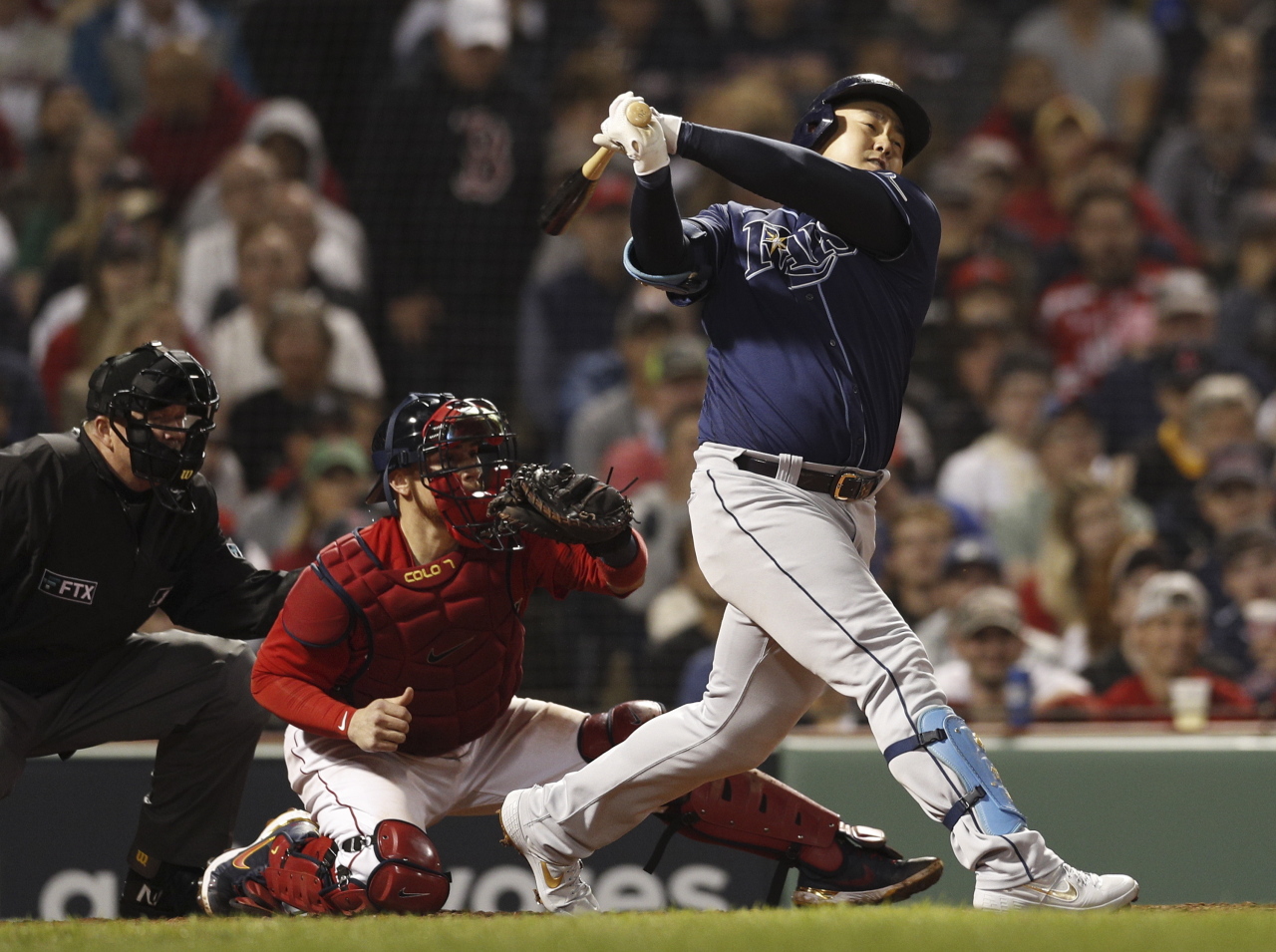 In this file photo from Oct. 11, 2021, Choi Ji-man of the Tampa Bay Rays strikes out against Josh Taylor of the Boston Red Sox during the top of the seventh inning of Game 4 of the American League Division Series at Fenway Park in Boston. (EPA-Yonhap)
Following multiple stints on the injured list (IL) in 2021, Tampa Bay Rays' South Korean first baseman Choi Ji-man can't wait for a fresh, not to mention healthy, start to a new season.

Choi returned home early Tuesday after completing his sixth major league campaign, and his third full season with the Rays.

He was limited to 83 out of 162 games in the regular season. Choi was sidelined at the start of the campaign after knee surgery, and landed on the IL on two separate occasions with groin and hamstring problems.

"Honestly, I am not 100 percent yet. I need to get treatments while I am in Korea," Choi told reporters after arriving at Incheon International Airport, west of Seoul. "My goal for next year is to play as many games as I can and help the team win. We have some great rehab programs, and I expect to get better quickly."

Choi said he was heartened by continued support of his fans even as he was struggling with injuries.

"I felt bad for my fans because I didn't get to play that much this year because of injuries," said Choi, who signed autographs for fans who greeted him at the airport in the early hours of the day. "And after I came back, fans kept on rooting for me. I was very touched."

Choi batted 2-for-7 with a home run in three postseason games.

The Rays are famous for their unwavering and ruthless pursuit of efficiency in building a roster. Over the years, they have let go of several star players once they became too expensive.

Choi, who earned US$2.45 million this year after winning his first salary arbitration case, may be in for another raise this winter.

The 30-year-old may price himself out of the Rays' reach, which has led to whispers of a potential trade.

"Talks like that always come out this time of year, and I am not really paying attention to them," Choi said.

Choi said he'll spend time with his family and prepare for 2022 working out at a baseball academy run by his brother. (Yonhap)