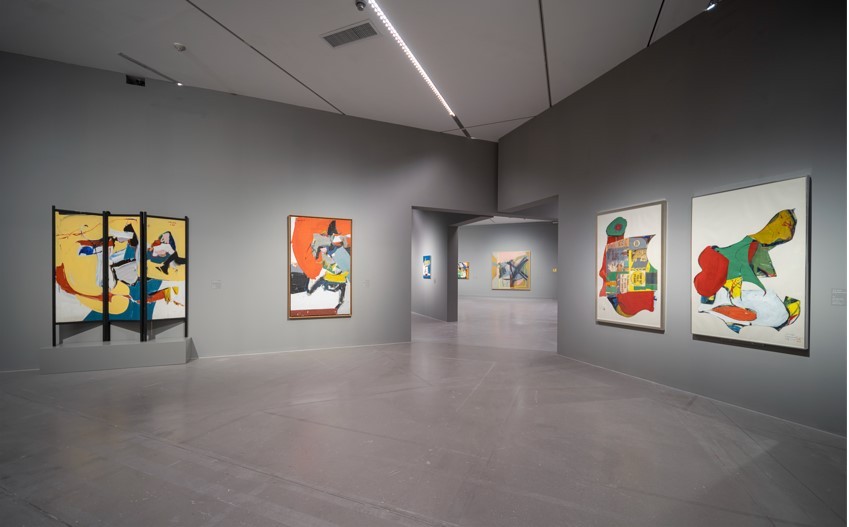 An installation view of “Wook-kyung Choi, Alice’s Cat” at MMCA Gwacheon (MMCA)
Korean abstract artist Choi Wook-kyung pioneered an abstract art of her own from the 1960s to the 1980s when female artists did not receive much attention in Korea.

Traveling back and forth between Korea and the US, Choi established her own painting style without being involved in any of the art movements of the times.

Born in 1940, Choi studied painting at Seoul National University and went to the US in 1963 in pursuit of expanding her art world. 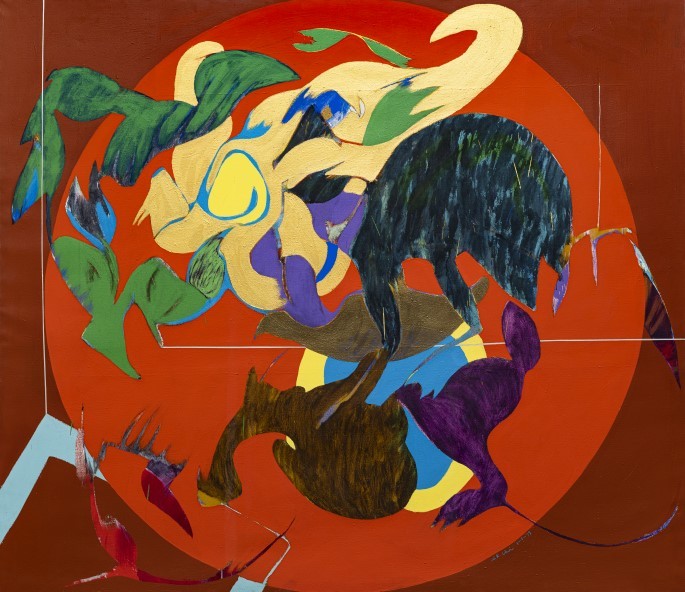 “Tightrope Walking” by Choi Wook-kyung (MMCA)
The exhibition “Wook-kyung Choi, Alice’s Cat” at the National Museum of Modern and Contemporary Art, Korea in Gwacheon, Gyeonggi Province, is the artist’s second large-scale retrospective at the museum. The first was held in 1987, two years after she died of a heart attack.

“Choi’s art does not belong to any of Korea’s mainstream art, neither in the Informalism of the 1960s, ‘dansaekhwa’ of the 1970s nor ‘minjung’ art of the 1980s,” curator Jeon Yu-shin told The Korea Herald. “We need to further study her art and more efforts need to be made to define her art in the context of Korean art history.”

Since her death, Choi’s work has often been viewed as “pessimistic,” Jeon said. Her untimely death at the age of 45 and rumors that she had attempted to kill herself by overdosing on sleeping pills, compounded the lingering perception.

“Now, we are living in the 2000s, it is time to reconstruct the perception about her art,” she added. 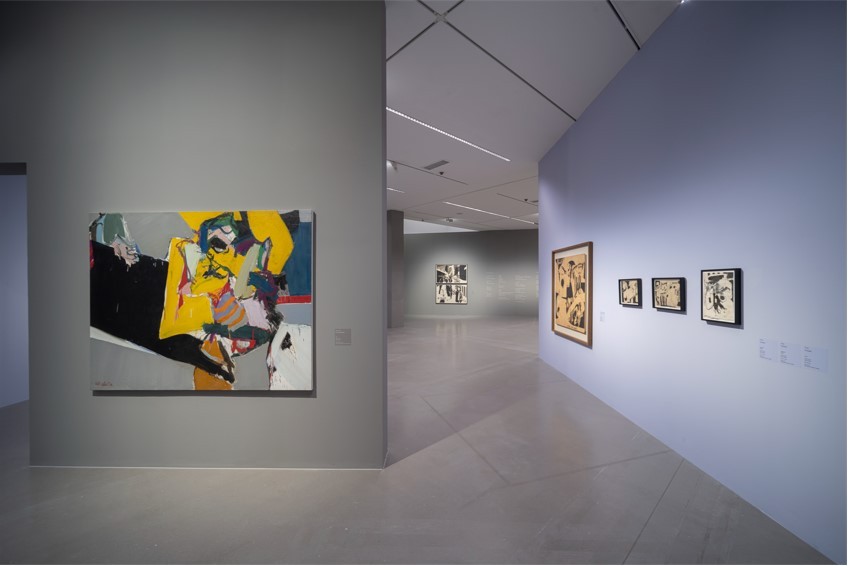 An installation view of “Wook-kyung Choi, Alice’s Cat” at MMCA Gwacheon (MMCA)
The title of the exhibition was inspired by Choi’s early painting, “Alice, Fragment of Memory” created in 1965, a few years after she arrived in the US, and her poem “Alice’s Cat” which was included in the book of her poetry, “Like Unfamiliar Faces,” published in 1972.

The year she unveiled “Alice Fragment of Memory” coincided with the 100th anniversary of Lewis Carroll’s “Alice’s Adventures in Wonderland.” As a Korean painter who had just started to explore American art, Choi would have empathized with “Alice in Wonderland,” according to the MMCA.

Choi earned a Master of Fine Arts degree at Cranbrook Academy of Art in 1965 and finished the residency program run by the Skowhegan School of Painting & Sculpture in Maine. After returning to South Korea in 1979, she served as a professor at Yeungnam University and began to explore mountain ridges of the Gyeongsang provinces and islands off the coast of those provinces. 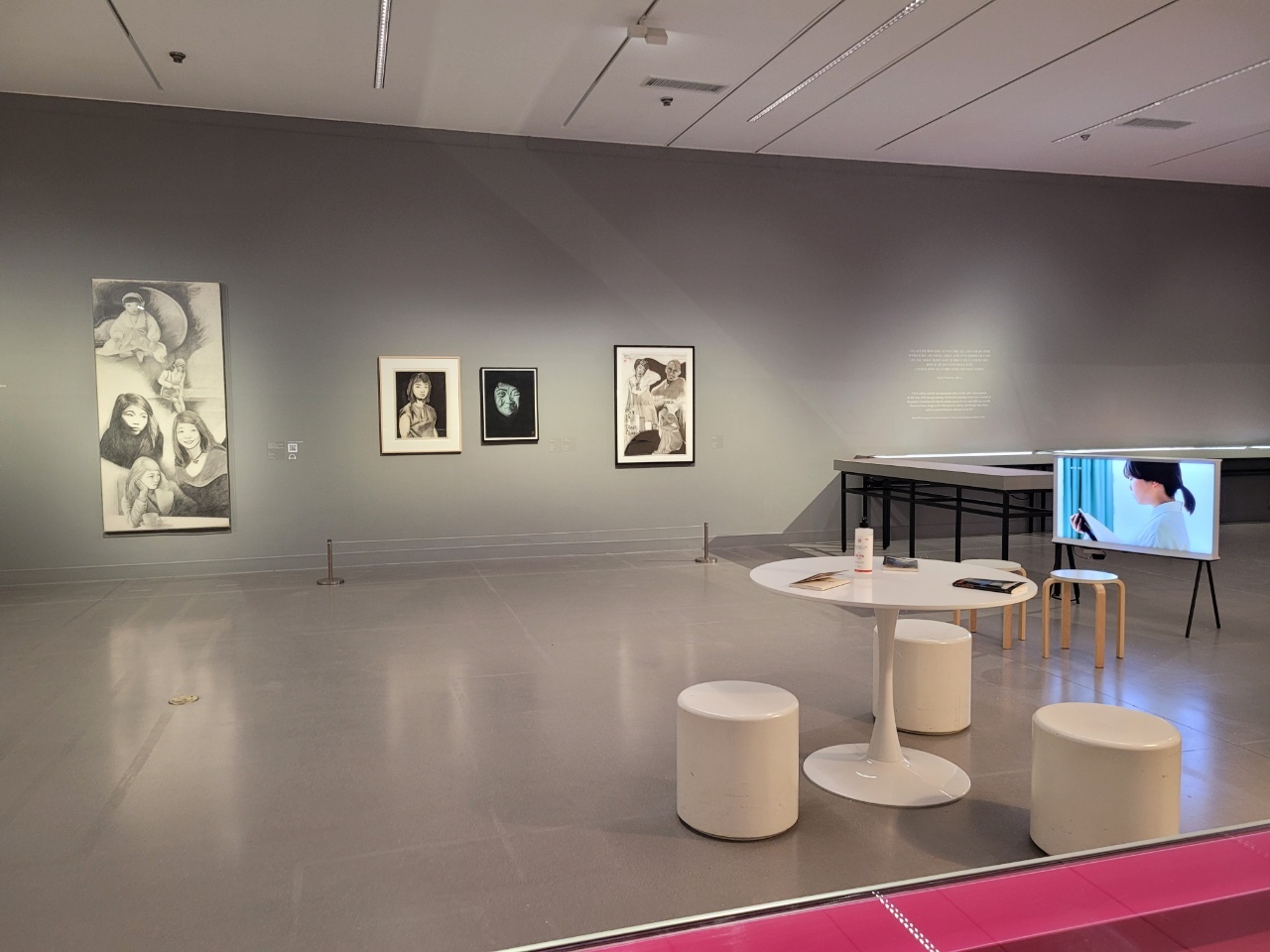 Choi Wook-kyung’s diverse self-portraits and poetry are on display at the exhibition “Wook-kyung Choi, Alice’s Cat.” (Park Yuna/The Korea Herald)
The retrospective sheds light on Choi’s literary talent, presenting her poetry along with her paintings.

The exhibition runs until Feb. 13 at MMCA Gwacheon. The museum lifted restrictions on the number of visitors starting Monday as part of the government’s “living with COVID-19” scheme.

A number of Choi’s works are included in the currently traveling exhibition “Women in Abstraction,” organized by the Centre Pompidou in Paris.