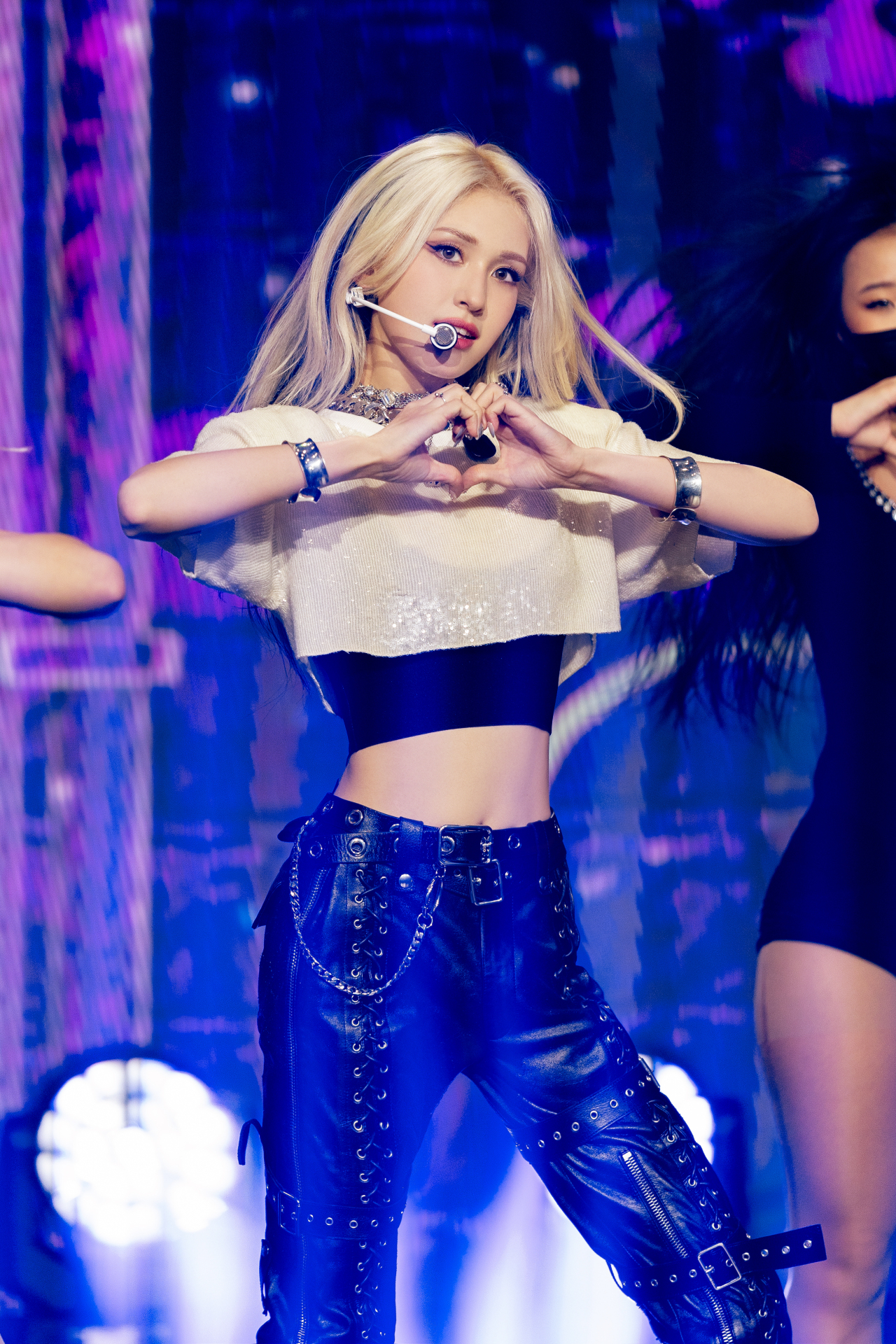 Ahead of the album’s release at 6 p.m., Jeon held a media showcase in Seoul, livestreamed due to the pandemic.

“XOXO” comes only three months after the singer gave a preview of the album with the single “Dumb Dumb.”

“I want to show my confidence with the new album. If I showed a relaxed manner with ‘Dumb Dumb,’ now I have self-confidence. I can really enjoy myself on the stage now, and I hope to do the same with ‘XOXO.’ I hope, with the album, I could establish my position as a solo artist.”

Jeon compared her first studio album to a passport, because “It’s something to be dealt carefully and with responsibility.”

Named after the “hugs and kisses” sign-off at the end of friendly messages, the title track is about saying goodbye to a relationship with an unfaithful lover. The pop-dance tune was produced jointly by Jeon’s label founder Teddy and American singer-songwriter Pink Sweats. 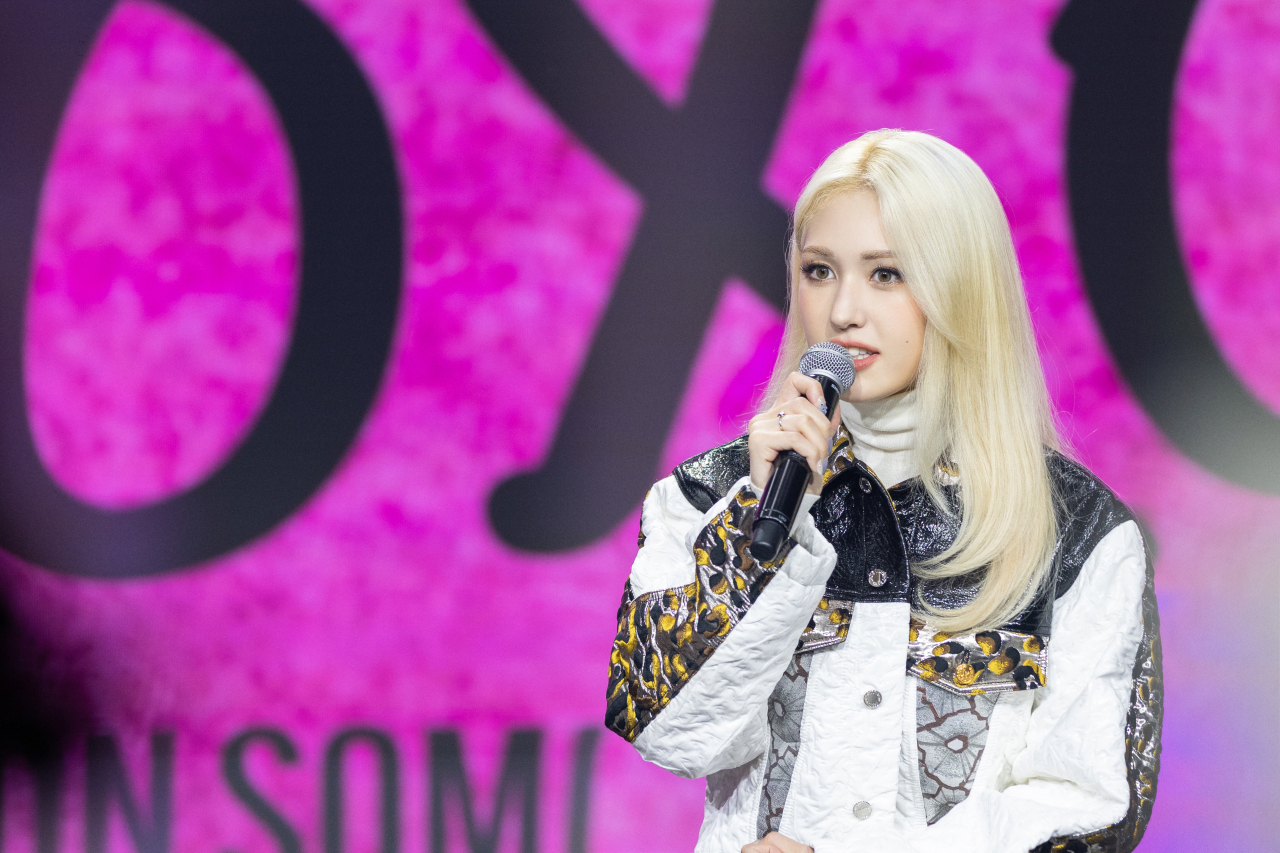 Jeon Somi speaks during her first full-length album “XOXO” media showcase in Seoul on Oct. 29. (The Black Label)
“’XOXO’ and ‘Dumb Dumb’ were both candidates for the title song. We couldn’t choose one over the other, so we decided to pre-release ‘Dumb Dumb’ and make a quick return with ‘XOXO,’” Jeon explained. “‘XOXO’ has the message of ‘with love,’ but mine is in a sarcastic tone, as if saying ‘fine, go have your life.’ The melody is easy to follow and I think it’s a good driving song.”

South Korean rapper Giriboy featured on the track “Don’t Let Me Go,” as the first guest to feature on Jeon’s solo songs.

The album also includes Jeon’s first self-produced song “Watermelon.” While she has previously taken part in writing and composing of her songs, such as “Dumb Dumb,” this is her first fully self-written and produced song.

“I discovered there’s something common between the fruit and love,” she explained of her inspiration for the song. “Since it’s my first self-made song, Teddy supported me more through compliments than advice. He encouraged me, saying that the song should reflect my own ideas as it’s my song.”

Also on the album is a new song “Anymore,” the artist's first all-English lyric song, and her previously revealed singles “Birthday,” “What You Waiting For" and “Outta My Head.” 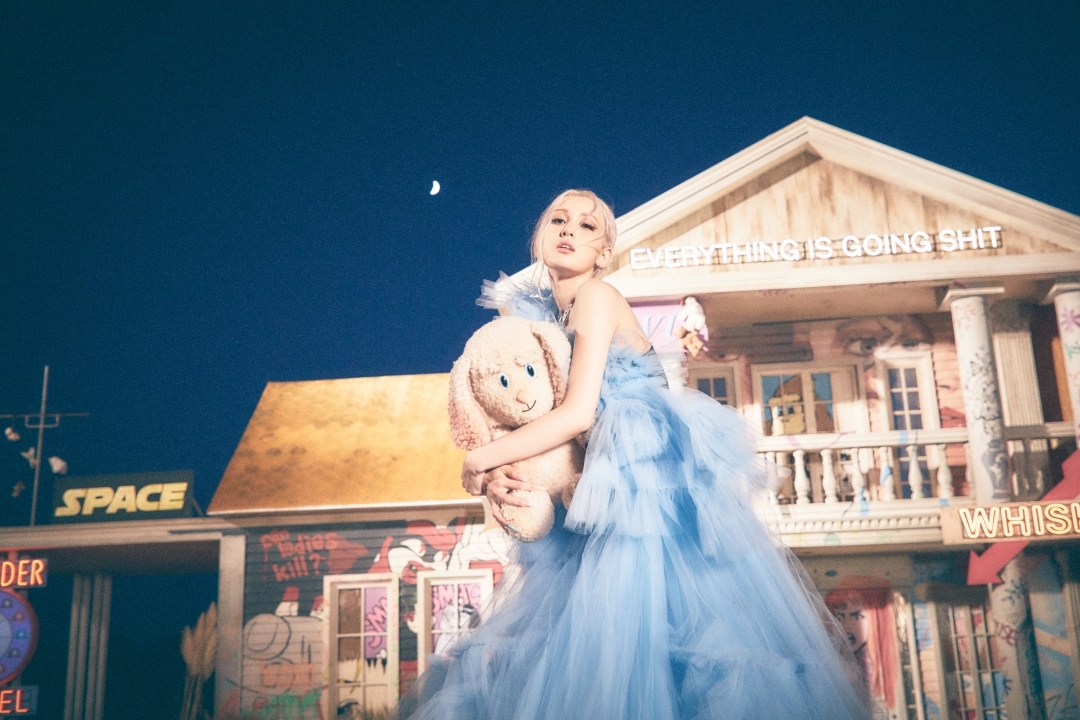 “XOXO” teaser image (The Black Label)
Jeon made her solo debut in June 2019 with “Birthday,” amid high anticipations as the final winner of Mnet’s popular survival audition program “Produce 101” in 2016.

“I can’t believe that two years have already passed. It’s hard to remember exactly what I’ve done in that time, but I know that I’ve got a grasp of what kind of music I want to pursue and what suits my voice the best,” Jeon said.

The singer also shared her thoughts on chasing her dream as a female solo artist in the K-pop scene.

“It’s not easy to live as a solo artist. I really need to try hard, becoming better with time and just carrying things on my own shoulders rather than relying on others in order to survive,” the 20-year-old said.

“In the past 21 years, I learned that people will accept me and the results will follow when I don’t have pressure and expectations. I put in everything into the album, so I’m really lighthearted. We just hope that people enjoy the album as much as we do.”