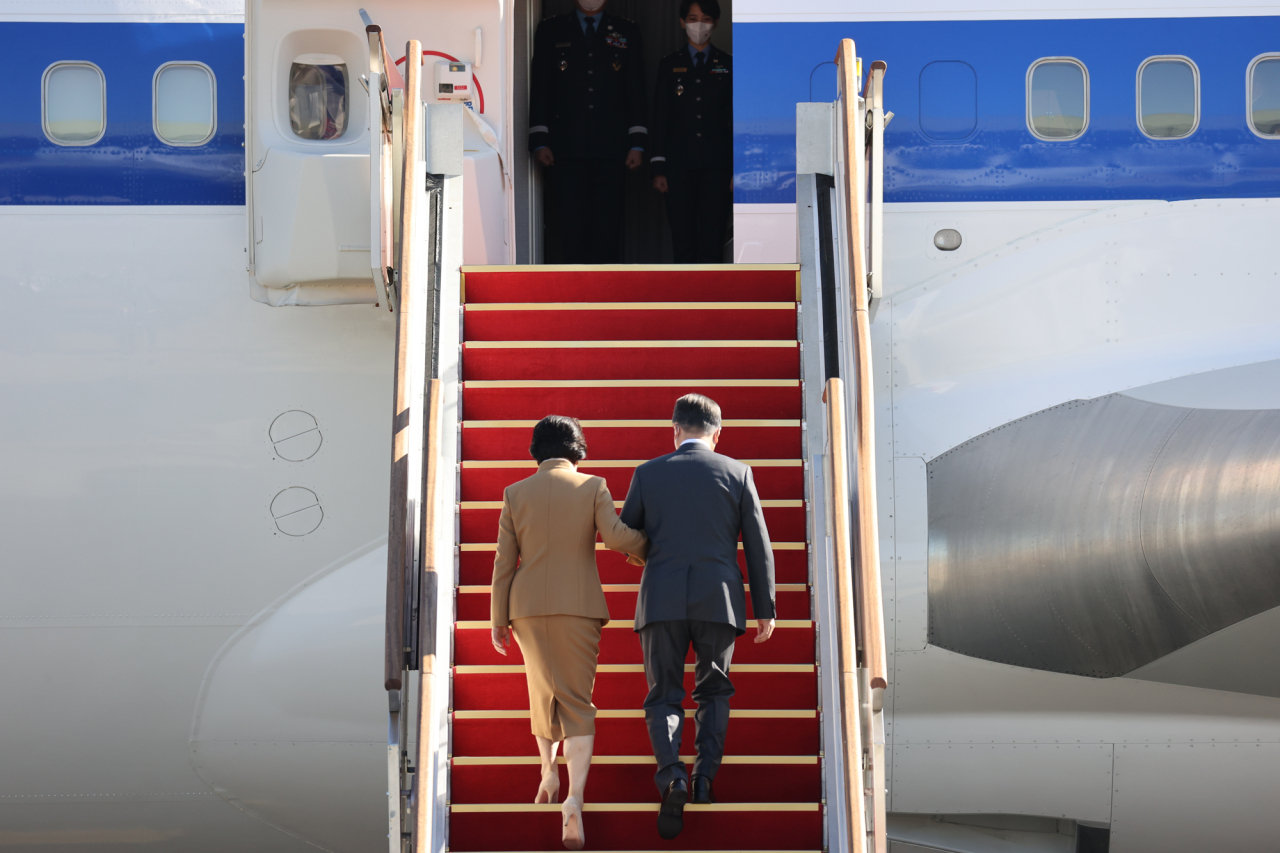 President Moon Jae-in (right) and first lady Kim Jung-sook board a plane at Seoul Airport in Seongnam, south of Seoul, Thursday, for trips to Italy for a meeting with Pope Francis, a Group of 20 summit and Scotland for the COP26, a United Nations climate summit, and a state visit to Hungary. (Yonhap)
South Korean President Moon Jae-in departed for Europe on Thursday, for a meeting with Pope Francis and to attend a Group of 20 summit in Rome and the UN climate summit in Scotland.

Moon’s first stop of his nine-day trip is Italy, where he is scheduled to meet Pope Francis at the Vatican on Friday to discuss a wide range of issues surrounding the Korean Peninsula, as well as global issues, including poverty, climate change and the COVID-19 pandemic. He is also scheduled to meet Vatican Secretary of State Cardinal Pietro Parolin.

It marks the second time Moon, a Catholic, is meeting the pope after he visited in October 2018.

All eyes are on whether a potential papal visit to North Korea will be realized during their meeting. Seoul pins high hopes that the pope’s visit could play a critical role in reviving the stalled peace process on the peninsula.

In 2018, Moon met the pope and relayed North Korean leader Kim Jong-un’s verbal invitation to his country. At that time, the pope expressed his willingness to visit the country and said he would consider if he received an official invitation. But with the denuclearization talks deadlocked and the peace process on the Korean Peninsula at a standstill, no progress has been made.

No pontiff has ever visited North Korea, a country known for severe crackdowns on religion, and in the past, the Vatican has said a papal trip to the North could not take place unless the regime agreed to allow freedom of religion and accept Roman Catholic priests.

But Pope Francis, who has shown interest in establishing lasting peace on the peninsula, has repeatedly expressed his willingness to visit.

Unification Minister Lee In-young is accompanying Moon during his talks with the pope. The ministry spokeswoman Lee Jong-joo said if the pope’s visit to the North is materialized, it will greatly contribute to building peace on the peninsula, and that the ministry will provide support to help realize the trip if related talks make progress.

Following the Vatican visit, Moon is set to join other leaders of the world’s major economies at the G20 summit in Rome on Saturday and Sunday. Marking the first in-person G-20 summit since the onset of the pandemic, COVID-19, economic recovery and climate change are expected to top the agenda.

On the sidelines of the summit, Moon could hold bilateral talks with US President Joe Biden, according to a Seoul official.

After Italy, Moon will head to Glasgow, Scotland to attend the 26th Conference of the Parties to the United Nations Framework Convention on Climate Change, known as COP26.

At the climate change gathering, Moon is set to report the country’s new goal of cutting greenhouse gas emissions by 40 percent from the 2018 levels by 2030, a sharp raise from its previous target of 26.3 percent. He will also confirm South Korea’s pledge to go carbon neutral by 2050.

Moon is also scheduled to deliver a keynote speech in a session on action and solidarity.

He then plans to make a state visit to Hungary on Tuesday, marking the first visit by a Korean president to the country in two decades since former President Kim Dae-jung in 2001.

Last year, Hungary erected a monument commemorating the 25 South Koreans killed in the 2019 deadly ferry sinking in Budapest. Moon will visit the site and pay tribute to the victims on Tuesday.

The next day, Moon is also scheduled to hold a summit with the prime ministers of the so-called “Visegrad Four” countries, including Czech Republic, Hungary, Poland and Slovakia.