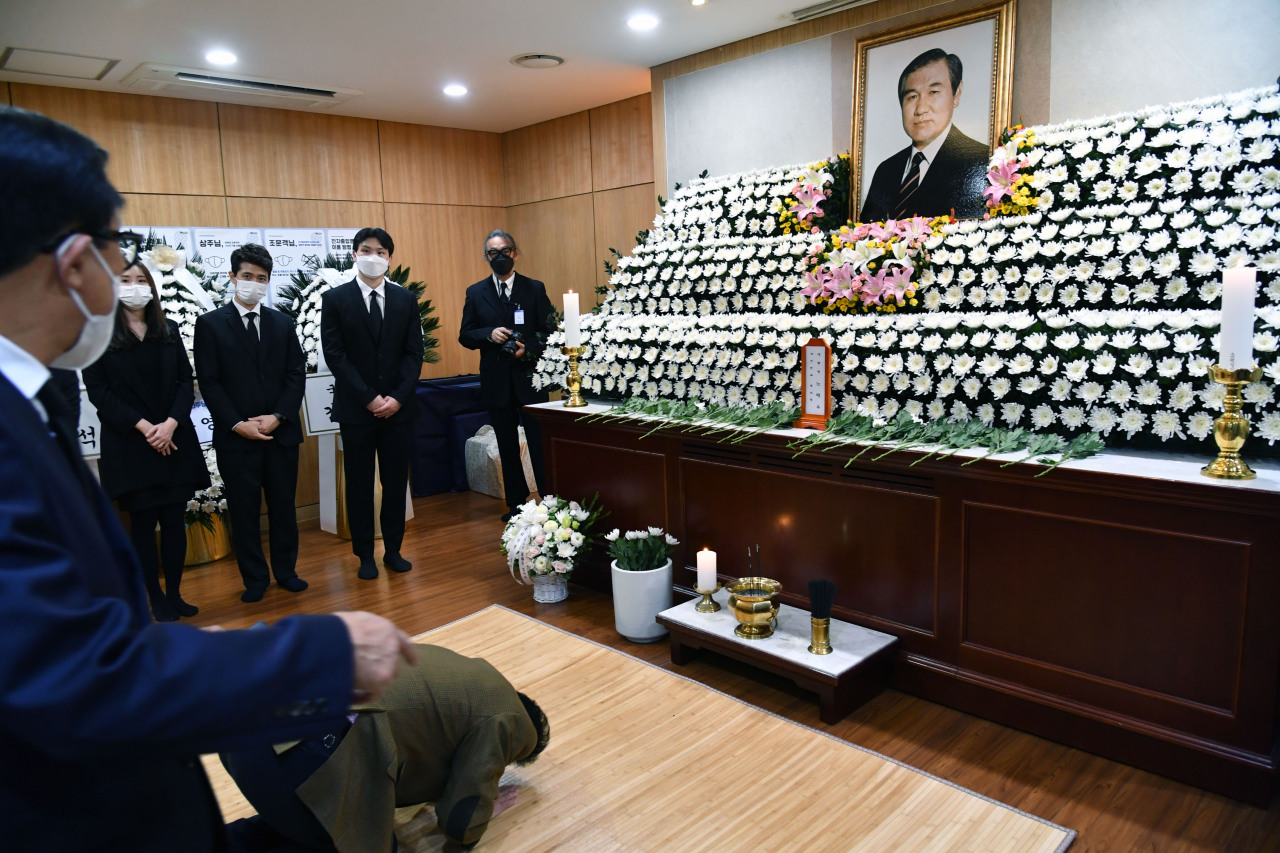 A mourner gives a deep bow at an altar for former President Roh Tae-woo during a funeral in Seoul on Wednesday. Roh, who served as president from 1988-93, died the previous day at the age of 88. (Yonhap)
President Moon Jae-in on Wednesday expressed his condolences to late former President Roh Tae-woo, crediting the deceased with foreign policy achievements but also describing his involvement in a coup and the brutal crackdown on a pro-democracy uprising as "faults."

The measured message by Moon, which came a day after Roh died at age 88, suggested that soul-searching had taken place to determine the right balance between paying respect to a late predecessor and public sentiment critical of Roh's dark legacy.

Earlier in the day, the government decided to hold a state funeral for Roh, the country's last general-turned-president accused of deep involvement in the 1979 coup and the bloody crackdown on a pro-democracy uprising in the southwestern city of Gwangju the following year.

"President Moon Jae-in prays for the deceased and delivered his words of condolences to the bereaved family," presidential spokesperson Park Kyung-mee told reporters.

"Former President Roh Tae-woo has not a few historical faults, including the forceful crackdown of the May 18 Democratization Movement and the Dec. 12 military coup, but he has achievements, such as successful hosting of 1988 Olympics, Northern Policy and the adoption of South-North Basic Agreement," Moon was quoted by Park as saying.

A senior presidential official said Moon is unable to visit the funeral altar of Roh because he was scheduled to hold ASEAN-related summits. From Thursday, Moon is set to make a three-nation European trip for a G20 summit and the UN climate talks.

Presidential chief of staff You Young-min will visit the funeral altar, the official said.

Roh rose to prominence after helping former President Chun Doo-hwan seize power through the 1979 military coup in the wake of a political vacuum created by the death of former authoritarian President Park Chung-hee.

Chun's junta was accused of ruthlessly cracking on the 1980 uprising in Gwangju, leaving more than 200 dead and 1,800 others wounded, according to conservative official data. (Yonhap)