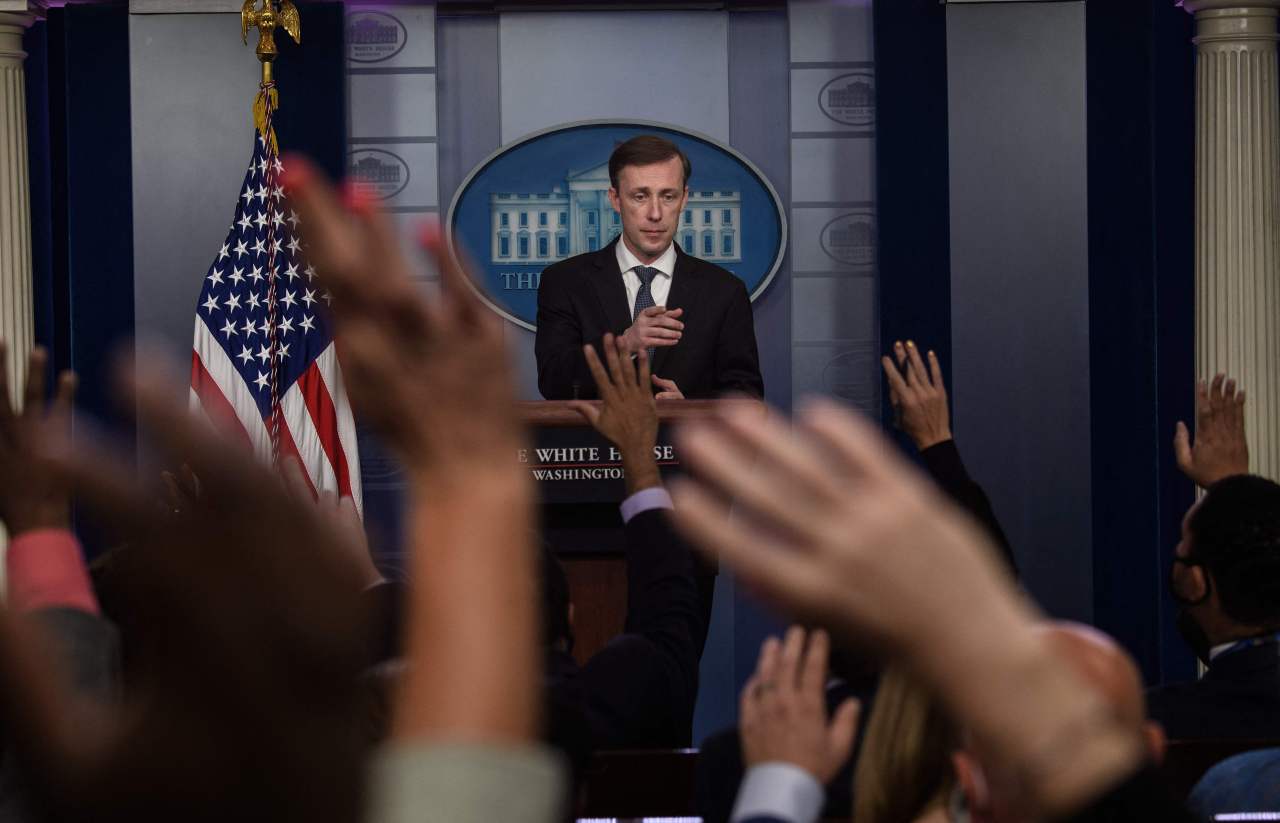 US National Security Adviser Jake Sullivan takes questions during the daily press briefing on Tuesday in the Brady Briefing Room of the White House in Washington, DC. (AFP-Yonhap)
Washington and Seoul appear to be on different trajectories on the matter of declaring a formal end to the Korean War, with a top US security official saying the allies could have “different perspectives” on the timing and conditions.

US national security adviser Jake Sullivan made the remarks Tuesday (US time) amid Seoul’s renewed push to declare a formal end to the 1950-53 Korean War, as a way to nudge Pyongyang back to talks and ultimately to convince the regime to abandon its nuclear arsenal.

“We may have somewhat different perspectives on the precise sequence or timing or conditions for different steps, but we are fundamentally aligned on the core strategic initiative here and on the belief that only through diplomacy are we going to really, truly be able to effectively make progress,” Sullivan said in a press briefing at the White House when asked about Washington’s position on such a declaration and whether it could be a catalyst for dialogue with Pyongyang.

Sullivan’s remarks, which mark the first time the US government has stated its stance on an end-of-war declaration, suggest that the two sides still remain at odds on this sensitive issue, despite their recent back-to-back discussions.

On Sunday, US special envoy for North Korea Sung Kim met with his South Korean counterpart, Noh Kyu-duk, and Noh said later that the two had engaged in “serious and in-depth” talks on the question of an end-of-war declaration, as well as on other ways to engage the regime. Last week, the two also met in Washington and discussed the issue.

Sullivan said Kim’s meeting with Noh had been “very productive and constructive” but declined to comment publicly on what he described as the “intensive discussions.”

The two Koreas are technically still at war, as the Korean War concluded not in a peace treaty but in an armistice agreement signed by the US-led United Nations Command, China and North Korea.

In recent weeks, President Moon Jae-in has been pushing for an end-of-war declaration -- something he has supported throughout his presidency -- in an attempt to salvage the peace process on the Korean Peninsula before he leaves office in May.

The US has been largely mum on matters related to an end-of-war declaration, but recently it appears to be giving the idea some consideration amid a long-running stalemate in nuclear diplomacy with Pyongyang since the collapse of the Hanoi summit in 2019.

Washington has begun looking into an end-of-war declaration internally, according to a government source here. Reports also suggest that Washington is undertaking a legal review of the matter, including specific wording in a possible draft declaration.

But observers said it would be difficult for Washington to sign on to Seoul’s proposal for an end-of-war declaration without a commitment to denuclearization from North Korea, or at least concrete steps toward that goal.

In contrast, Seoul views an end-of-war declaration as a gateway for future talks and as a political gesture to build trust and end hostilities with Pyongyang, in the hopes that this could lead to a more detailed, legally binding peace treaty.

Moon Chung-in, chairman of the Sejong Institute and a former special adviser to President Moon on foreign and national security affairs, said Tuesday that it would be difficult for Seoul to persuade Washington to alleviate sanctions, which it would need to do to officially end the Korean War.

“In order for the two Koreas to declare an end to the war and for the North and the US to resume talks, it needs to give Pyongyang what it wants,” said Moon at a forum, noting that the North wants the US to withdraw what it calls hostile policies against the country and ease the sanctions.

“While talks on humanitarian assistance and vaccine provisions to the North are taking place, it appears to be not easy for Seoul to convince Washington to ease sanctions on Pyongyang,” he said.