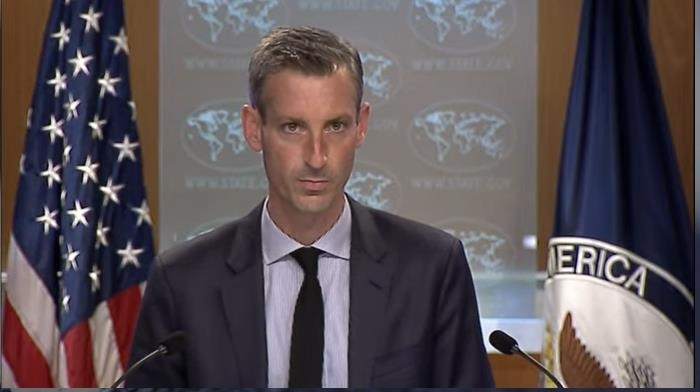 US Department of State Press Secretary Ned Price is seen speaking in a press briefing at the state department in Washington on Tuesday in this image captured from the website of the state department. (Yonhap)
The United States is not aware of North Korea's possible participation in the upcoming UN climate change conference, a state department spokesperson said Tuesday.

Ned Price said the US accordingly had no immediate plans to engage with North Korea at the climate conference, known as the Conference of the Parties (COP), set to be held in Glasgow, Britain.

"I am not aware. First of all, I would have to refer you to Pyongyang to speak to any plans they may have to participate in Glasgow next week," the press secretary told a press briefing.

"Certainly, I'm not aware of any plans that we have, at the moment, to engage with any delegation from the DPRK," he added, referring to North Korea by its official name, the Democratic People's Republic of Korea.

A Seoul official earlier said the North was expected to send a delegation to the UN climate summit.

North Korea currently remains unresponsive to US overtures for dialogue. It has also stayed away from talks with the US since early 2019.

Price reiterated US commitment to engage with the reclusive North.

"What we have said broadly when it comes to the DPRK is that we believe diplomacy is the most effective means by which to achieve what it is that our policy review identified as that overarching goal, and that is a complete denuclearization of the Korean Peninsula," he said.

"We have made clear to the DPRK that we have no hostile intent towards the country, that we are prepared to engage diplomatically with them. We've made that very clear in a series of of messages and we await a response," added Price. (Yonhap)