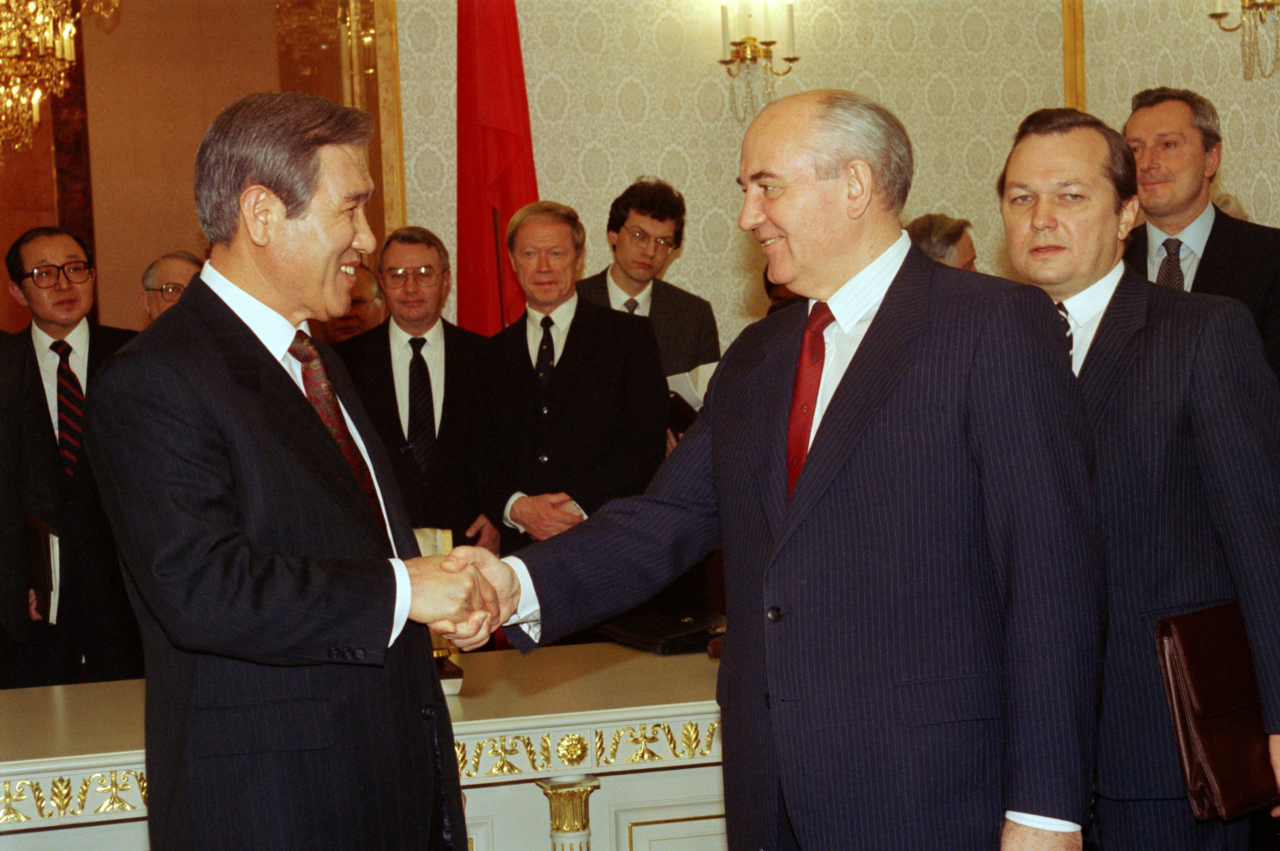 In this file photo dated Dec. 14, 1990, then South Korean President Roh Tae-woo (L) shakes hands with Soviet President Mikhail Gorbachev prior to their summit talks at the Kremlin in Moscow. Roh, who served as president from 1988-93, died on Tuesday, at the age of 88. (Yonhap)
Despite a complicated assessment of his political career, the late former President Roh Tae-woo is widely credited for opening a new chapter in South Korea's diplomatic ties with communist nations under his signature Nordpolitik and laying the groundwork for promoting inter-Korean relations.

Roh, who died at the age of 88 Tuesday, was the country's first president to establish diplomatic relations with the traditional allies of North Korea in the late 1980s and early 1990s, including the Soviet Union and China.

It was also under Roh's presidency the two Koreas held their first-ever prime ministers' talks in 1990. The following year, they concurrently joined the United Nations, an apparent accomplishment of the Roh administration's Nordpolitik, or Northern Diplomacy, and signed the landmark Inter-Korean Basic Agreement.

The accord calls for Seoul and Pyongyang not to invade each other and to work together toward reconciliation.

Experts say the agreement still serves as the foundation for cross-border exchanges and cooperation.

In 1991, the two Koreas also signed the Joint Declaration on the Denuclearization of the Korean Peninsula, though the North has since conducted six nuclear tests.

In his inauguration speech in February 1988, Roh said, "Improving relations with countries of different ideologies and systems will contribute to security, peace and co-prosperity in East Asia."

Under his diplomatic initiative, South Korea forged formal ties with Hungary in 1989, followed by the establishment of such relations with the Soviet Union in 1990 and China in 1992.

On the back of improved ties with the communist bloc, Roh sought to mend ties with the North, dispatching the late then Prime Minister Kang Young-hoon to Pyongyang to meet with Kim Il-sung, North Korea's late founder and grandfather of the current leader Kim Jong-un.

Throughout his five-year presidency, many agree, Roh significantly broadened Seoul's diplomatic horizons and made history in inter-Korean ties. (Yonhap)