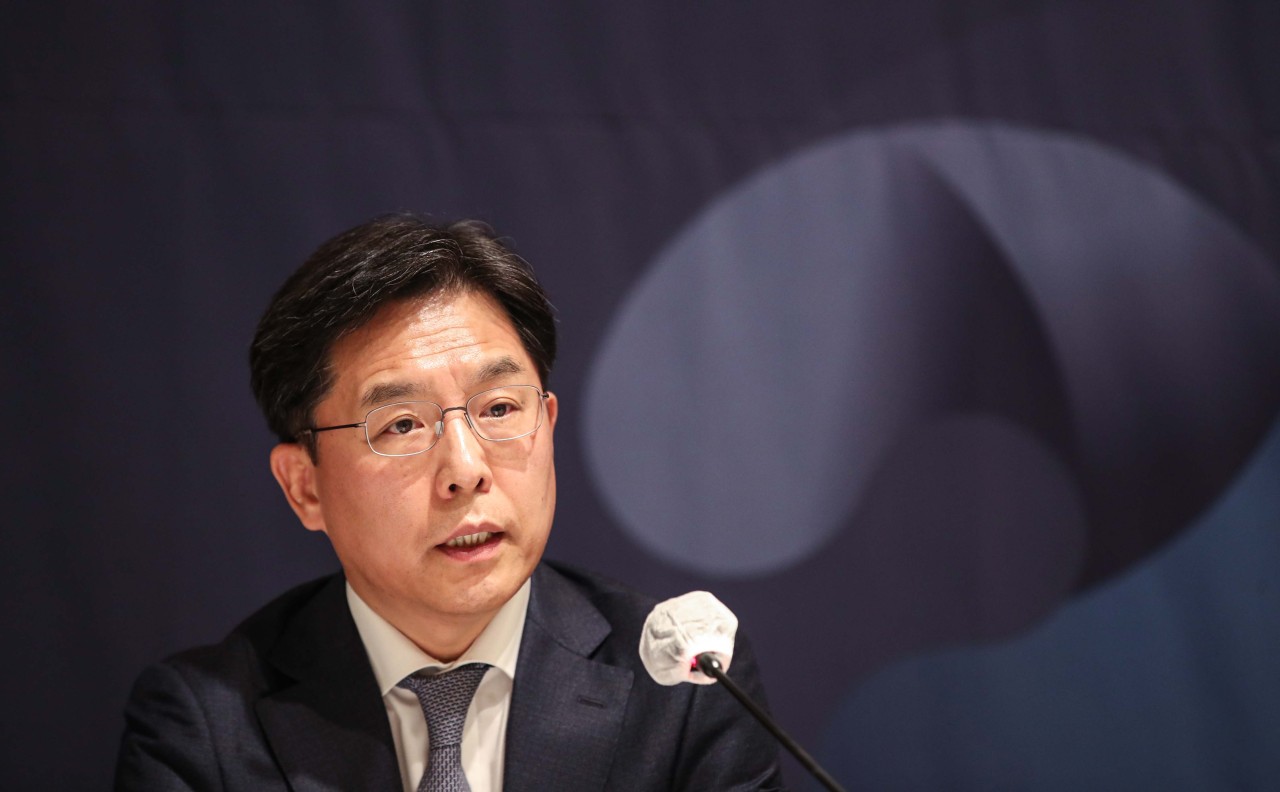 South Korea`s chief nuclear envoy, Noh Kyu-duk, speaks during a forum organized by the Institute for National Security Strategy in Seoul on Monday. (Yonhap)
A declaration to formally end the Korean War is the most symbolic move that Seoul could take to show Pyongyang that neither Washington nor Seoul have a “hostile policy” toward the regime and revive the stalled denuclearization talks, South Korea‘s chief nuclear envoy said Monday.

Noh Kyu-duk, the special representative for Korean Peninsula peace and security affairs, made the remark at a forum organized by the Institute for National Security Strategy, a think tank affiliated with South Korea’s spy agency. The envoy recently returned from back-to-back talks with his US counterpart, Sung Kim, on ways to revive the stalled nuclear diplomacy with Pyongyang, with the end-of-war declaration among possible options.

Noting that the 1950-53 Korean War -- which finished in an armistice and not a peace treaty -- is technically the world’s longest war, continuing another 68 years after the initial fighting, Noh stressed that the end-of-war declaration is “meaningful as a trust-building measure” with the North.

“The end-of-war declaration could serve as a gateway for talks on achieving complete denuclearization on the Korean Peninsula and the establishment of a permanent peace,” said Noh. “Since the Hanoi Summit, the North has been calling for (Washington and Seoul) to withdraw their hostile policy against the regime, as a prerequisite for talks. The end-of-war declaration is the most symbolic action to show that there is no hostile policy against the North.”

The Biden administration has repeatedly said it is willing to meet with North Korean officials “anywhere, anytime and without preconditions.” But the North insists Washington needs to abandon what it calls its hostile policy, an apparent reference to the sanctions and joint military drills between the US and South Korea, before any talks happen.

Amid the stalled nuclear talks and inter-Korean stalemate, President Moon Jae-in has floated the end-of-war declaration -- something he has supported throughout his presidency -- as a way to nudge Pyongyang back to the talks and ultimately to encourage the regime to give up its nuclear arsenal.

Noh said the North has given a “prompt response” on Seoul’s proposal for an end-of-war declaration. “While the North continues to raise the need to resolve prior tasks before the talks (restart), it appears to be considering the possibility for talks as well.”

Last month, Kim Yo-jong, the North Korean leader’s powerful younger sister, said the end-of-war declaration idea was “interesting and admirable.” However, she added that the North would only be willing to discuss the proposal if the South ceases “hostile policies” and “double-dealing attitudes” -- referring to the way Seoul characterizes the North’s firing of ballistic missiles as “provocations,” while justifying its own arms buildup.

Noh stressed that the end-of-war declaration could serve as important momentum to restart the talks for denuclearization, which have been deadlocked since the Hanoi Summit collapsed in 2019.

“This also adheres to Washington’s position that it is willing to discuss any issues (with North Korea) anywhere and at any time,” he said. “In this regard, the US and South Korea discussed various North Korea policies to promptly bring the North back to talks.”

Noh and Sung Kim held talks in Seoul on Sunday, where Noh said the two engaged in a “serious and in-depth” discussion on the end-of-war declaration issue, as well as other ways to engage the regime. Last week, the two also met in Washington, along with their Japanese counterpart Takehiro Funakoshi for a three-way session.