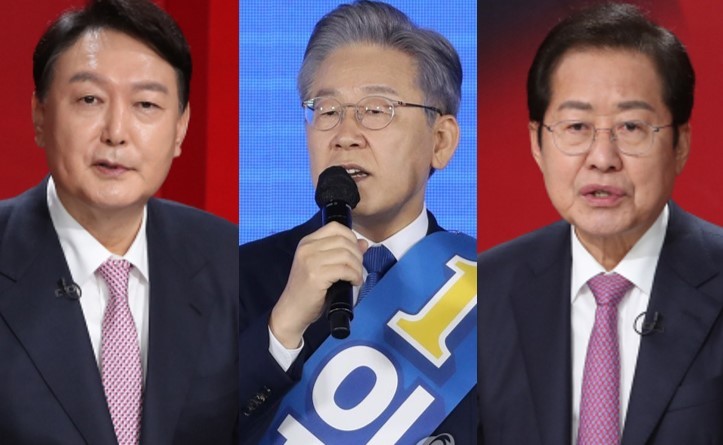 Those who support neither of the two biggest parties have seen a gradual rise in number. The figure stood at 25 percent in the third week of October, a rise of two percentage points from two months ago.

The polling results reflect voters’ increasing disappointment in the major candidates as they have been mired in various controversies, allegations and slip-ups.

One of the biggest challenges ruling party candidate Lee faces concerns a controversial housing development project in Daejang-dong that he promoted when he was reelected as mayor of Seongnam, Gyeonggi Province, in 2014. Questions are being raised as to whether Lee, who had the authority to permit and approve construction work on the project, may have given favors to help some people reap undue profits.

He has also been negatively evaluated in terms of morality for his past drunken driving record, abusive language and an alleged affair with an actress.

Yoon is suspected of being involved in political meddling. He is alleged to have been involved in complaints being filed against politicians and journalists linked to the ruling Democratic Party ahead of last year’s general elections.

Yoon’s mother-in-law and wife are alleged to have been involved in criminal charges such as stock price manipulation. He has also been under fire for frequent slip-ups. Recently he had to hastily explain remarks in which he seemed to defend a former dictator, President Chun Doo-hwan.

Rep. Hong is also not free of criticism over past remarks.

In a book published in 2005, Hong wrote that he had obtained a “piggy stimulant” for a friend who wanted to have sex with a particular woman when he was a college student. He was referring to a livestock drug that induces estrus in pigs used for breeding.

When he was a presidential candidate for the previous conservative Liberty Korea Party in 2017, he said, “(Washing dishes) was decided by heaven and women should not ask men to do it,” causing a stir.

Expectations for an outside candidate are not high either.

Experts say an election campaign fraught with scandals and allegations without proper pledges may lead to low voter turnout.

Eom Kyeong Young, leader of the Zeitgeist Institute, said, “More than 50 percent disapproval ratings for candidates is a dire situation. If this goes on, those who are centrists or the young generations will be more likely to abstain from voting, saying there is no one to vote for.”