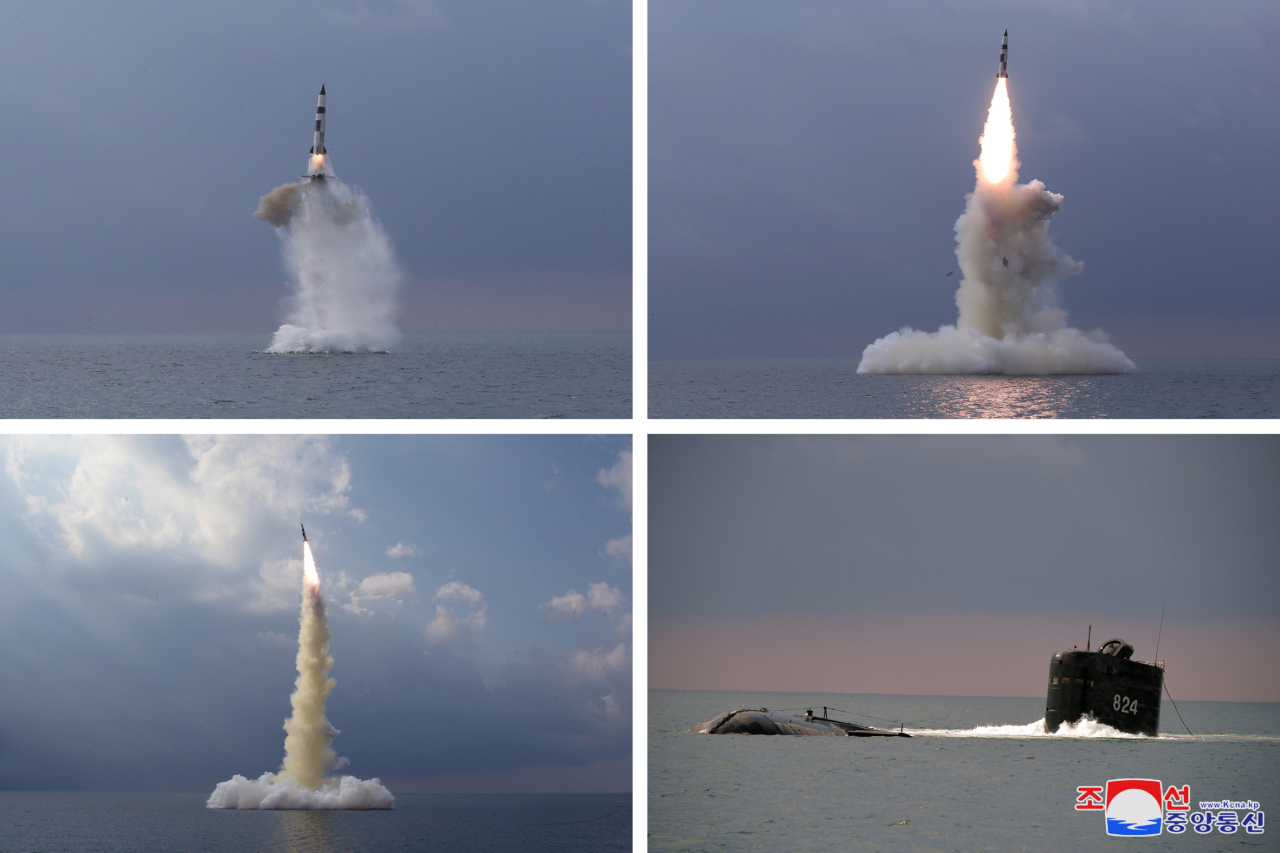 This combined photo, released Korean Central News Agency on Wednesday, shows a SLBM being fired in waters off the east coast the previous day. (KCNA-Yonhap)
North Korea on Thursday defended its latest test-firing of a submarine-launched ballistic missile as necessary for its own defense and said the weapon does not target the US.

A spokesperson for the North’s Foreign Ministry said it is “truly concerned” that the US is showing “abnormal reactions” to the country’s exercise of its right to self-defense and criticized the US for taking “provocative moves” by calling for an emergency UN Security Council meeting on the issue.

The North said it successfully tested a new type of SLBM on Tuesday, the latest in a series of recent weapon launches. The launch, which was the most significant show of force by the North since US President Joe Biden took office this year, drew sharp rebukes from the international community, with the US denouncing it as “provocation” and as a threat to the region.

“When doing the recent test-firing we did not have the US in mind nor aimed at it, but it is the work which had already been planned purely for the defense of the country. So there is no need for the US to worry or trouble itself over the test-firing,” the spokesperson said in a statement carried by the state-run Korean Central News Agency.

It stressed that the North’s deterrence “does not aim at a specified state or forces but is for preventing the war itself and defending the sovereign rights,” saying both the US and South Korea have been excluded from its list of “arch-enemies.”

Pyongyang then accused the US of “double standards” for criticizing the North’s development and test-firing of “the same weapon system” that the US possesses.

“It only excites our suspicion” about the authenticity of Washington’s insistence that it has no hostile intent toward the North, the spokesperson said.

“If the US does not take issue with the DPRK’s regular and legitimate exercise of the sovereign right, no tension will be caused on the Korean Peninsula,” it said, but warned of more serious consequences otherwise.

DPRK stands for the North’s official name, the Democratic People’s Republic of Korea.

On Wednesday, the UNSC held a closed-door emergency session. In response, Pyongyang said the US and UNSC are “tampering with a dangerous time bomb.”

US Ambassador to the UN Linda Thomas-Greenfield condemned the SLBM launch as the “latest in a series of reckless provocations” by the country, calling on Pyongyang to engage in “sustained and substantive dialogues.”

“Since the beginning of September the DPRK has launched multiple ballistic missiles, one of which the DPRK claimed included a new hypersonic glide vehicle capability. These are unlawful activities. They are in violation of multiple Security Council resolutions and they are unacceptable,” she said ahead of the meeting.

She also called on all UN member states to fulfill their sanctions obligations under existing UNSC resolutions, to prevent Pyongyang from “accessing the funds, the technology, the know-how it needs to further develop its unlawful weapons of mass destruction and ballistic missile programs.”

The ambassador then criticized the UNSC committee monitoring sanctions on North Korea, saying it “is not doing its job.”

Pyongyang’s latest SLBM launch was a reminder that the regime continues to enhance its weapons capabilities amid the long-stalled denuclearization talks with the US. It also came as Seoul and Washington have been stepping up diplomacy to nudge the regime back to talks.

“The North will likely continue to test weapons by the end of the year to complete the development of new weapons and the SLBM and also to promote them both domestically and internationally,” said Cheong Seong-chang, director of the Center for North Korean Studies at the Sejong Institute. “It will likely refrain from testing in January and February though, ahead of the Beijing Olympics. This means the regime could conduct more tests of missiles as much as possible before then.”

But the North could return to talks all of a sudden in time for the Beijing Olympics, he said.

Unification Minister Lee In-young said on Thursday that Pyongyang may be seeking for dialogue opportunities, despite its series of weapon launches.

“North Korea, while continuing to fire missiles, has not taken strategic actions, such as a nuclear test and an ICBM launch. This could be interpreted as (Pyongyang’s) intention to explore dialogue.”