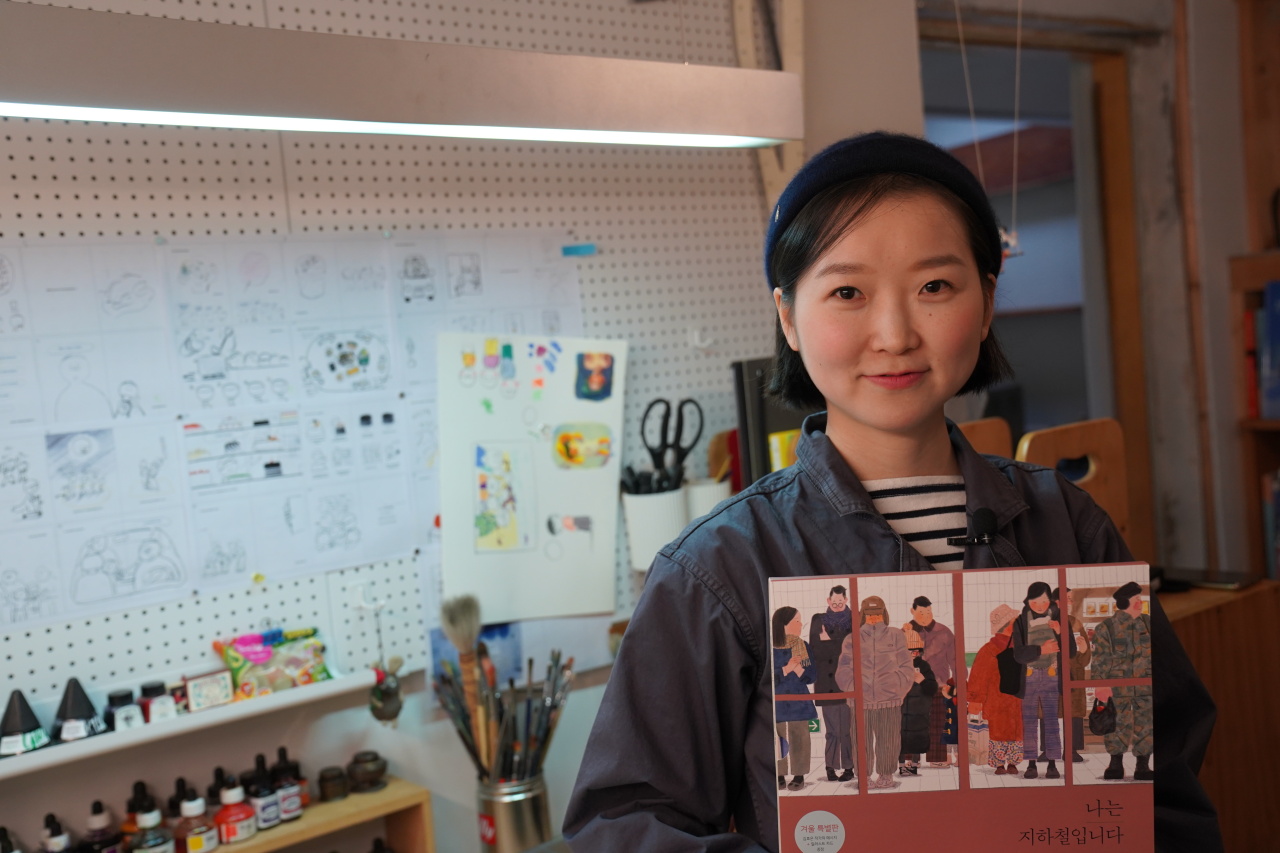 Kim Hyo-eun, author of the award-winning illustration book, “I am the Subway” (Munhakdongne Publishing Group)
While using Seoul’s bustling subway, most passengers keep their eyes glued to their smartphones.

But while riding Line 2, the country’s busiest subway line, author and illustrator Kim Hyo-eun decided to look up from her screen and appreciate the view.

Absorbed in what she saw, she captured the moments of daily passengers hopping on and off at their destinations, from head to toe, not missing their facial emotions -- excited at times and exhausted at others.

Kim’s “I am the Subway” won this year’s World Illustration Award in the Professional Children’s Publishing category on Oct. 12.

First published in South Korea in 2016, the book was translated into English last year by Deborah Smith, who is best known for her translation of Han Kang’s “The Vegetarian.”

“I felt quite puzzled upon hearing the news that I won, because it has been some time since the book came out,” Kim said in an interview with The Korea Herald on Tuesday. “What was even more astonishing to me was the responses from foreign readers, finding out that my story is communicated and touched upon by people across borders.”

Kim recalled the year when the book first came out, followed by a short business trip to an overseas book fair. Even at the fair, she thought it would be extremely difficult for foreign readers to sympathize with the weary lives of the Korean characters in the subway, portrayed in her story.

It took three years from the moment the theme of the book came across the author’s mind to the piece actually being published.

The seeds of the main theme began to sprout as stories, ever since Kim became interested in “subway drawings,” as the author puts it, which became her hobby for the past 11 years.

Kim began to closely monitor each person who took the subway, whether they were constantly moving or sitting down. She nimbly sketched the images in her own drawing book. Without Kim realizing, the story for the book slowly began to bloom while fulfilling her hobby in the subway.

“If you follow the neighborhoods where Line 2 passes, you will notice the city’s great variety of colors. From fancy skyscrapers in neatly organized districts, to the ragged hilltops with not much sunlight shining above, the more you immerse yourself into the scene, the tones change in subtle ways. So I felt this place (Subway Line 2) would serve a great background to bring about the characters we get to encounter in our daily lives.”

Asked about difficulties while creating the book, which took longer than she expected, Kim recalled a particular moment.

“When I faced a slump while writing this book, I went without thinking to a local shoe repair shop to interview the man there. The shoe cobbler’s first words to me were, ‘I’m too ordinary to tell you anything (about myself).’ His words reignited my resolve to listen carefully to what fills his daily life, to find the ‘real story’ inside him, and that part is also in my book.”

The author believes that illustration books are not just for children, and added that she never has the readers’ age category in mind while working on any of her stories. 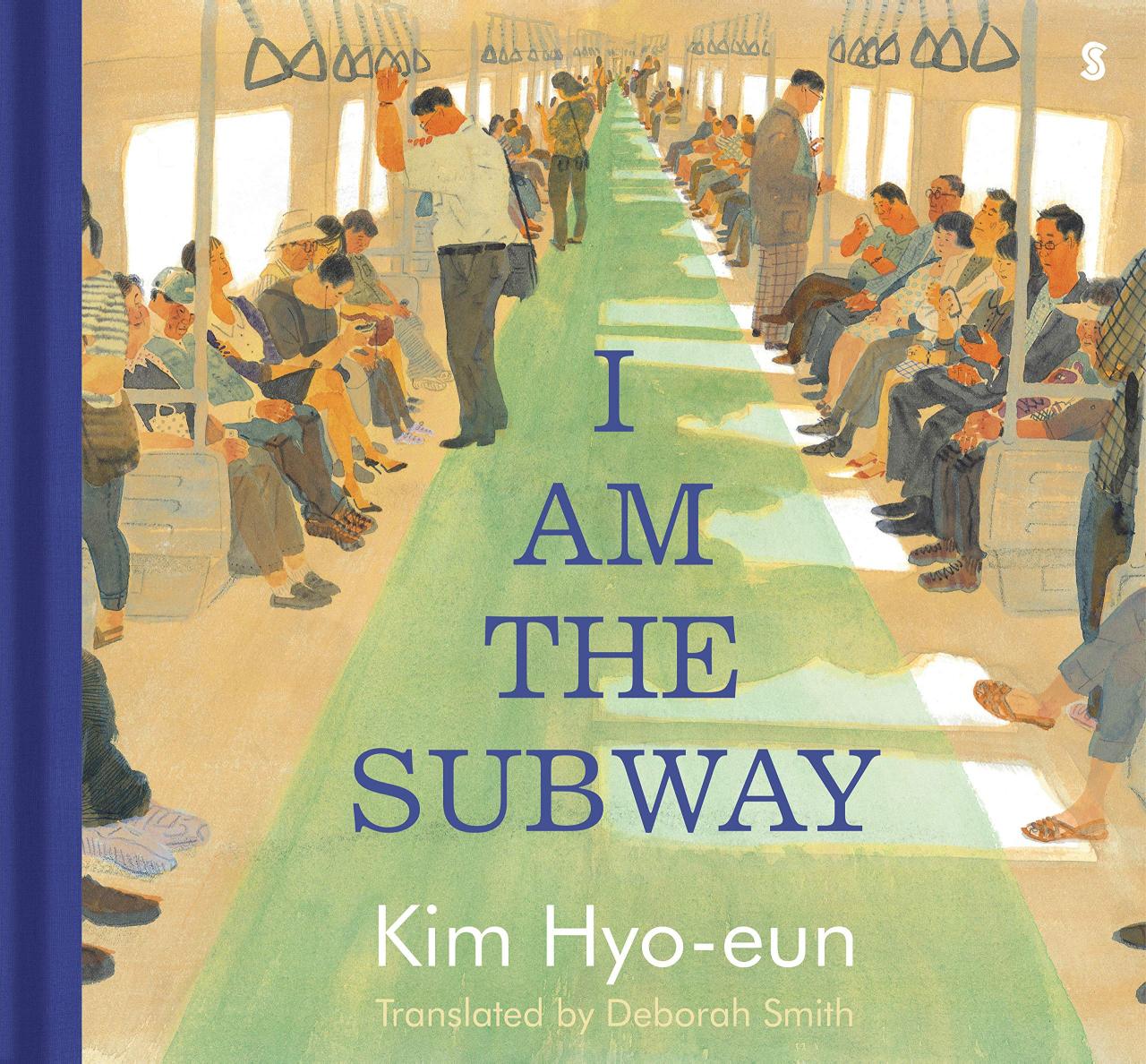 Cover of the English edition of “I am the Subway” (Scribble)
“I have received comments by readers who simply loved the portrayal of subways, and mothers who grabbed the book for her children at the bookstore, but ended up enjoying it more than their kids,” she said.

Kim explained that these coincidences reassure her that the story resonates in unexpected directions, and gives her the belief she needs to carry on.

Kim’s next illustration book is on the virtue of “sharing,” using numbers as the medium. Although the publishing date is undecided, she is avidly working on the story after her little child is asleep, with hopes that one day, her beloved one will enjoy it too.