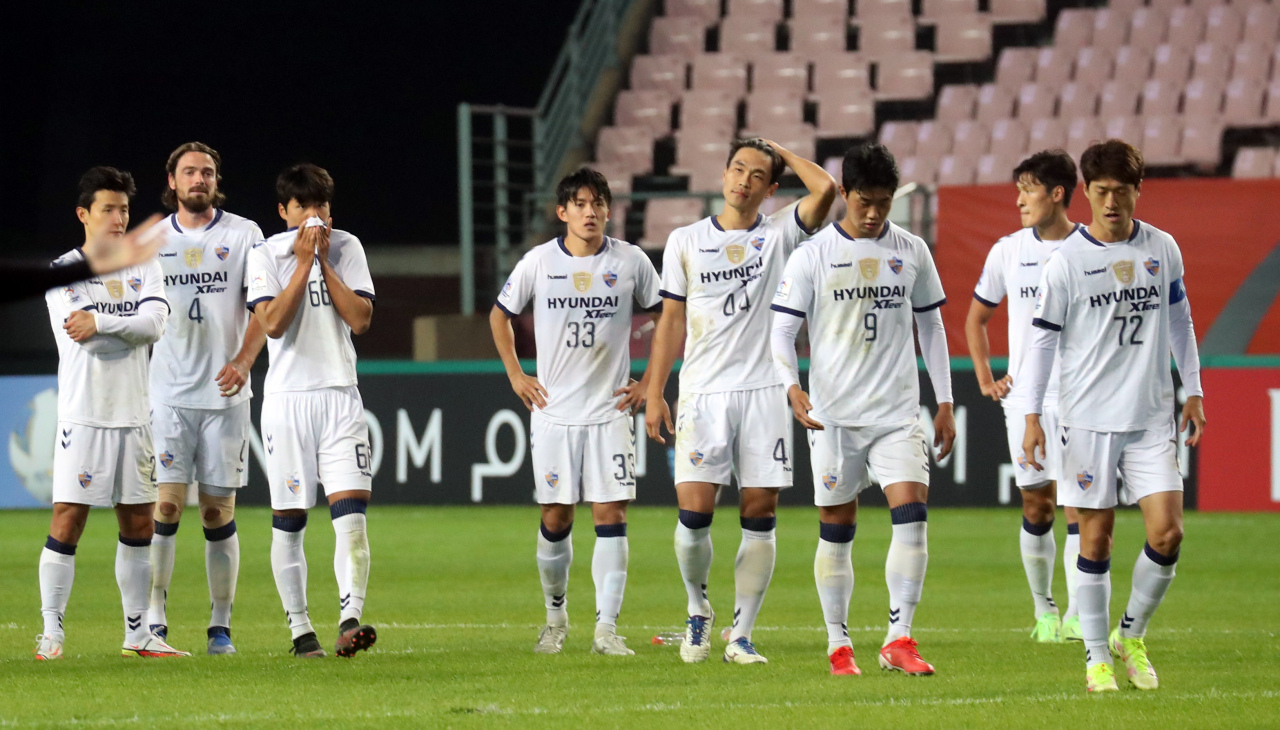 Ulsan Hyundai FC players react to their loss to Pohang Steelers on penalties in the semifinals of the Asian Football Confederation Champions League at Jeonju World Cup Stadium in Jeonju, about 240 kilometers south of Seoul, on Wednesday. (Yonhap)
Before Ulsan Hyundai FC took on their regional rivals Pohang Steelers for a spot in the final of the top Asian club football tournament Wednesday night, few pundits and oddsmakers had predicted a loss by the mighty K League 1 leaders.

After all, Ulsan had much more firepower and boasted superior depth at all positions. They hadn't lost in their past 17 matches in the Asian Football Confederation (AFC) Champions League. And they were also the defending champions.

Ulsan had already taken down another K League giant, Jeonbuk Hyundai Motors, in the quarterfinals. Facing Pohang, in the midst of a mediocre season in the South Korean league, would seem to be just a minor nuisance during Ulsan's inexorable and seemingly inevitable march to the final.

But Pohang defied all odds to knock off Ulsan on penalties at Jeonju World Cup Stadium in Jeonju, some 240 kilometers south of Seoul. And the devastating loss was a case of deja vu for Ulsan.

The two clubs "East Coast Derby" matches have produced some memorable moments in the K League and largely in favor of Pohang.

In the 2013 season finale, all Ulsan needed was a draw against second-place Pohang, and the league championship would be theirs. But Pohang beat them 1-0 to snatch the trophy with 74 points, one better than Ulsan.

The two clubs met in the final match of the 2019 season. Ulsan, once again, were in position to secure the championship with at least a draw against Pohang. This time, Pohang were well out of contention and had little on the line, other than playing the role of a spoiler.

Pohang routed Ulsan 4-1 in that match. Combined with Jeonbuk's 1-0 win over Gangwon, Ulsan finished in second place. Ulsan and Jeonbuk were tied at 79 points, but Jeonbuk held the tiebreak edge in goals scored, 72-71.

Pohang broke Ulsan's heart again Wednesday night. Alexander Grant headed in a last-gasp equalizer, banking one in off the right goal post in the 90th minute to even the score at 1-1 and force extra time.

Neither side generated much in the 30-minute session, which set up the always nervy penalty shootout.

Ulsan's first shooter, Dave Bulthuis, missed his shot high. All five Pohang shooters converted their kicks, with captain Kang Sang-woo booking the ticket to the final as the fifth and last taker.

Pohang will take on the Saudi Arabian club Al-Hilal in the final on Nov. 23 in Riyadh. Both clubs have so far won three Asian club championships each, tied for the most all time. (Yonhap)