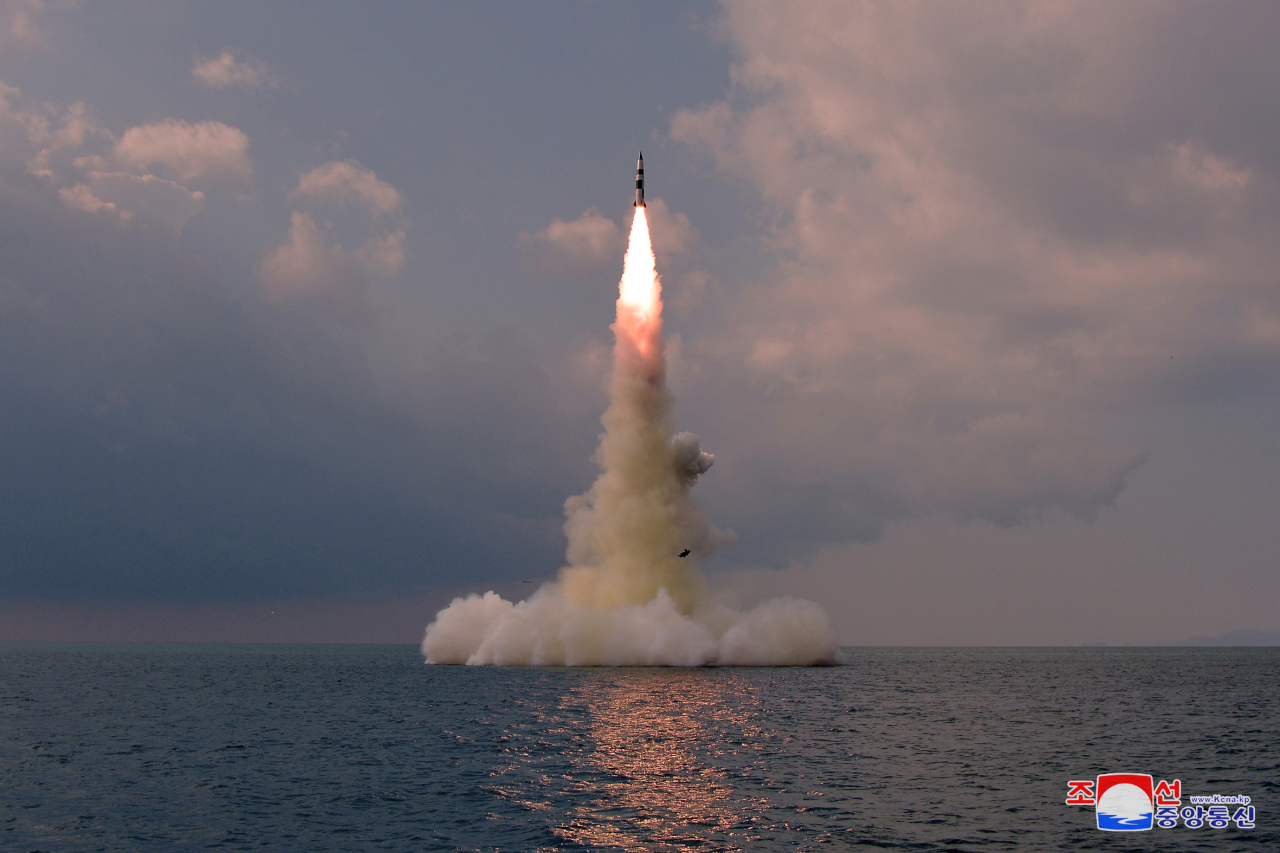 In this photo, released by North Korea's Korean Central News Agency on Wednesday, shows a submarine-launched ballistic missile being fired in waters off the east coast the previous day. (KCNA-Yonhap)
North Korea on Wednesday confirmed it had test-fired a new submarine-launched ballistic missile the previous day, the first such weapons test in two years and evidence of the regime’s ever-expanding weapons program.

On Tuesday, South Korea’s military said the North had fired what appeared to have been a short-range SLBM from the port of Sinpo in the east of the country, home to the regime’s main shipyard that builds submarines.

The North’s state-run Korea Central News Agency said the missile it launched had “lots of advanced control guidance technologies including flank mobility and gliding skip mobility,” quoting its Academy of Defense Science. The test will “greatly contribute to putting the defense technology of the country on a high level and to enhancing the underwater operational capability of our navy,” it added.

The North said the SLBM was launched from “the same 8.24 Yongung ship” -- that is, from the submarine used for its first SLBM test in 2016.

The last time Pyongyang tested an SLBM was in October 2019. The regime’s SLBM development raises alarm as it could potentially give the country fatal “second-strike” capabilities -- the ability to retaliate against a nuclear attack with nuclear weapons -- from a location beyond the Korean Peninsula.

It marks the country’s eighth weapons test this year and its fifth launch since September -- others have included a long-range cruise missile, a train-launched ballistic missile and what it said was a hypersonic missile.

The launch on Tuesday was the most provocative by the North since US President Joe Biden took office this year and a reminder that Pyongyang continues to enhance its weapons capabilities amid the long-stalled denuclearization talks with the US. It also came as Seoul and Washington have been stepping up diplomacy to nudge Pyongyang back to talks.

The White House condemned the latest launch as violating UN Security Council resolutions and as a threat to the region, urging the North to refrain from further provocations. Its press secretary, Jen Psaki, added that the launches “underscore the urgent need for dialogue and diplomacy,” reiterating the US stance of being willing to meet North Korean officials “anywhere, anytime, without preconditions.”

Pyongyang is banned from testing ballistic missiles and nuclear weapons under UNSC resolutions.

Meanwhile, South Korea expressed “deep regrets” over the launch, but didn’t go so far as to call it “provocation,” apparently in mind of Pyongyang’s earlier call for an end to what it called “double standards” -- meaning the South condemns the North’s weapons development tests while building up its own military capabilities.

The missile launch coincided with a three-way meeting among the top nuclear envoys of South Korea, the US and Japan in Washington on Tuesday.

South Korea’s nuclear envoy, Noh Kyu-duk, said the three sides had evaluated the recent situation on the Korean Peninsula, including the latest missile launch, and agreed on the importance of maintaining stability on the peninsula and working together closely to restart the peace process at an early date, during his meeting with US and Japanese counterparts Sung Kim and Takehiro Funakoshi.

The three countries raised concerns that the North’s continued missile launches could affect their efforts to bring the North back to the dialogue table, according to a senior South Korean official speaking on condition of anonymity. But there were views that the missile launch attested to the need to quickly resume dialogue with Pyongyang, the official added.

Foreign Minister Chung Eui-yong on Wednesday echoed similar stance, stressing the need for engaging the regime in light of the missile launches.

“We should take some actions so that the North will no longer be able to develop nuclear and missile capabilities,” Chung said during a parliamentary audit session. “Easing sanctions can be considered as part of the measures, on conditions that the North accepts the dialogue proposal.”

Experts say the North is expected to continue more weapons tests in coming months to sharpen its military technology, pressing both Seoul and Washington despite their repeated calls for dialogue.

“The North is pulling all-out efforts to secure the SLBM technology, as it views this as the ultimate weapon to complete the country’s strategic nuclear technology, capable of hitting the US mainland,” said Park Won-gon, professor of North Korean studies at Ewha Womans University. “The North could respond to calls for talks, but it will continue to conduct weapons tests and press both the US and South Korea.”