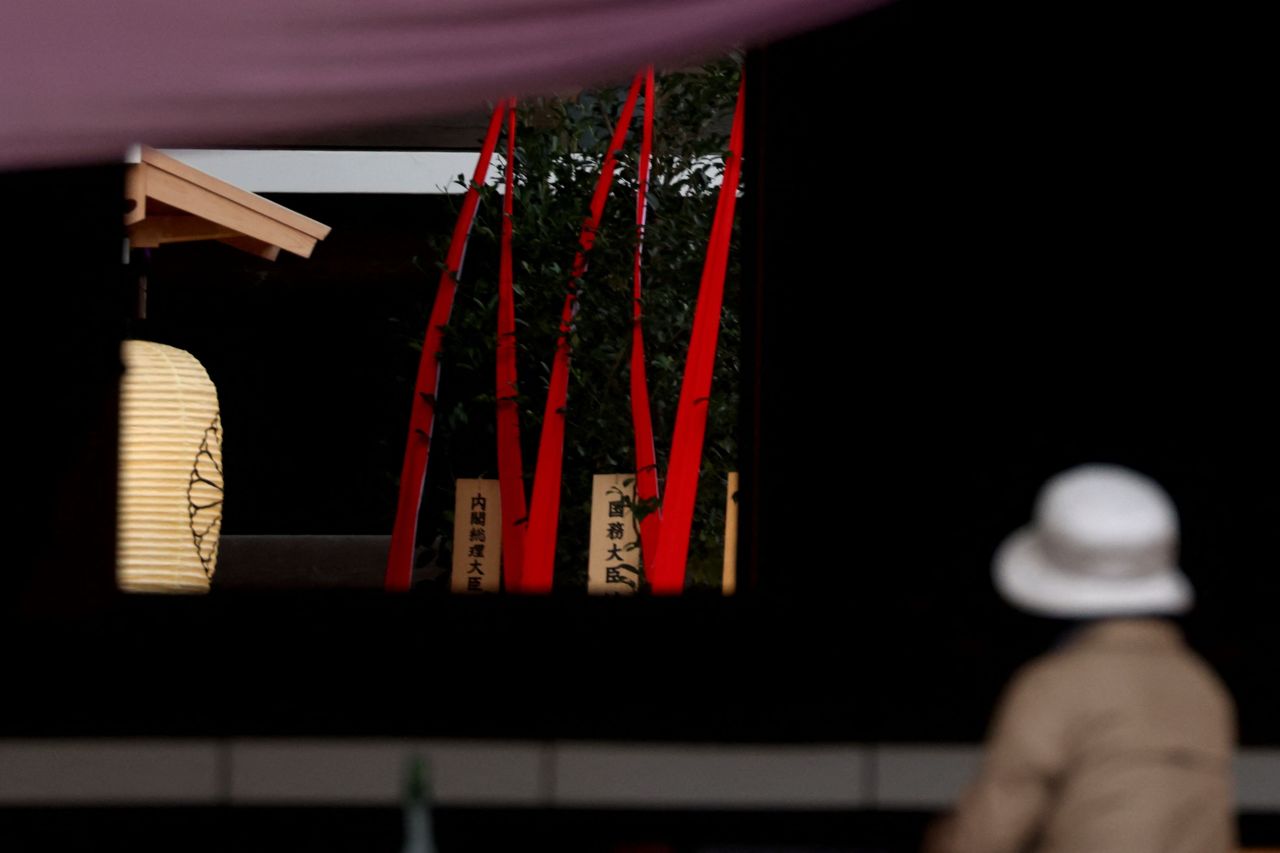 A woman prays in front of a wooden plaque showing the name of Japan's Prime Minister Fumio Kishida seen with a "masakaki" tree that he sent as an offering to the controversial Yasukuni Shrine on the first day of autumn festival in Tokyo on Sunday. (AFP-Yonhap)

South Korea’s Foreign Ministry on Sunday expressed “deep regret” over Japanese Prime Minister Fumio Kishida’s sending of a ritual offering to the Yasukuni war shrine, which is seen by its Asian neighbors as a symbol of Japan’s wartime aggression.

Kishida sent a “masakaki” tree offering under his name as prime minister to celebrate the shrine’s two-day fall festival that runs through Monday, according to Japan’s Kyodo News.

It marked Kishida’s first such offering to the shrine since taking office earlier this month. Kishida does not plan to visit the memorial in person, but his immediate predecessor Yoshihide Suga made a pilgrimage to the shrine Sunday.

It urged Japan’s leaders to “squarely face history and show by action their humble introspection on and genuine self-reflection for the past history, on the occasion of the launch of the new cabinet.”

Japanese leaders’ offerings and visits to the controversial memorial have long outraged South Korea and China, which bore the brunt of Japan’s wartime hostility. The neighbors view the pilgrimage to the shrine as Japan’s lack of remorse over its military aggression and an attempt to glorify the past deeds instead.

The last time a sitting Japanese leader visited the shrine was December 2013, when Shinzo Abe paid a visit that sparked strong criticism from South Korea and China. Since then, Japanese prime ministers have avoided visits to the shrine while in office, but have still continued to send offerings.

During his one-year tenure as prime minister, Suga also did not visit the shrine in person, but sent offerings instead.

Kishida took office at a time as its ties with South Korea have continued to be strained due territorial and historical disputes stemming from Japan’s 1910-45 colonial rule of the Korean Peninsula, which have recently morphed into an economic feud.

Meanwhile, South Korean President Moon Jae-in and Kishida finally held their first phone call Friday, where they agreed to deepen relations and accelerate talks to resolve the protracted row over wartime forced labor -- one of the major sticking points in the strained ties between the neighbors.