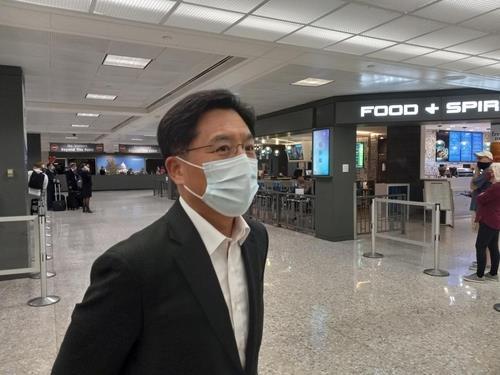 Noh Kyu-duk, South Korea's chief nuclear envoy, speaks with reporters upon his arrival at the Washington Dulles International Airport on Saturday, ahead of meetings with his US and Japanese counterparts in Washington. (Yonhap)
South Korea's chief nuclear envoy said Saturday that a formal declaration of an end to the 1950-53 Korean War could pave the way for resuming the stalled denuclearization talks with North Korea.

Noh Kyu-duk made the remark ahead of his meetings with his US and Japanese counterparts in Washington later this week to explore ways to bring Pyongyang back to the negotiating table.

The upcoming talks will likely touch on President Moon Jae-in's recent proposal to declare a formal end to the Korean War, which Noh has said is the most effective among confidence-building measures with North Korea.

"I expect more in-depth discussions on various issues at the working level, including the end-of-war declaration," Noh said during a meeting with reporters upon his arrival at the Dulles international airport. "(The declaration) is meaningful as a gateway to talks for the complete denuclearization and lasting peace on the Korean Peninsula."

South and North Korea technically remain at war as the Korean War ended only with an armistice, not a peace treaty.

Noh and the US special representative for North Korea, Sung Kim, are scheduled to meet bilaterally on Monday before holding a trilateral meeting with their Japanese counterpart, Takehiro Funakoshi, the following day. Noh plans to hold a separate bilateral meeting with Funakoshi on Tuesday, according to Seoul officials.

The three held their last in-person talks in September in Tokyo.

Noh said he expects to have a "constructive" discussions with Kim to come up with inducements for dialogue with the North, saying Seoul and Washington have been jointly preparing humanitarian aid for the North and it is nearly ready.

"(The two sides) have been discussing various, creative ways (to bring the North to the talks)," Noh said.

Nuclear talks between Washington and Pyongyang have remained stalled since the Hanoi summit in 2019 between then US President Donald Trump and North Korean leader Kim Jong-un that ended without a deal. (Yonhap)