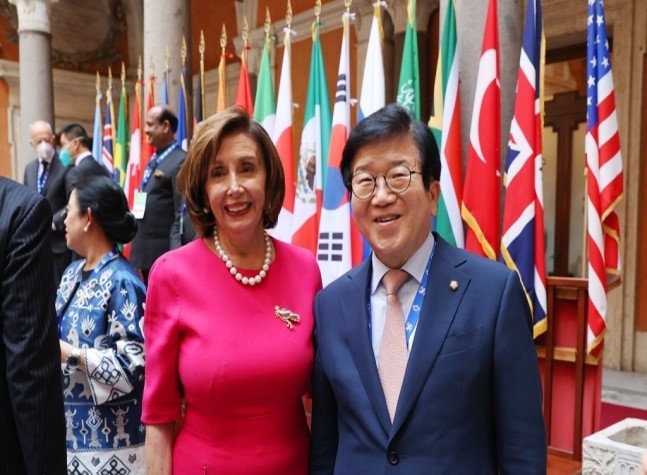 During the 11-day trip, he focused on “sales diplomacy” to expand summit talks at the parliamentary level and allow South Korean companies to enter the regions, his office said.

Park met all 18 representatives of 16 countries who attended the two-day speakers’ meeting in Rome, which ran Oct. 7-8, and engaged in diplomatic activities.

During the event he had an unscheduled meeting with US House Speaker Nancy Pelosi.

Park approached Pelosi at the meeting and invited her to visit South Korea, saying he appreciated her leadership on the US economic stimulus bill. Pelosi, in turn, praised Park’s speech on realizing carbon neutrality by 2050.

During his visit to Egypt, he met with President Abdel-Fattah el-Sissi, Senate President Abdel-Wahab Abdel-Razeq and Hanafy Ali El Gebali, the speaker of Egypt’s House of Representatives. Park asked for Egypt’s help in engaging North Korea, and for support for the push to officially end the 1950-53 Korean War.

After his visit, Samsung Heavy Industries and Egypt’s Suez Canal Office made plans to sign a memorandum of understanding next month for a shipyard construction project.