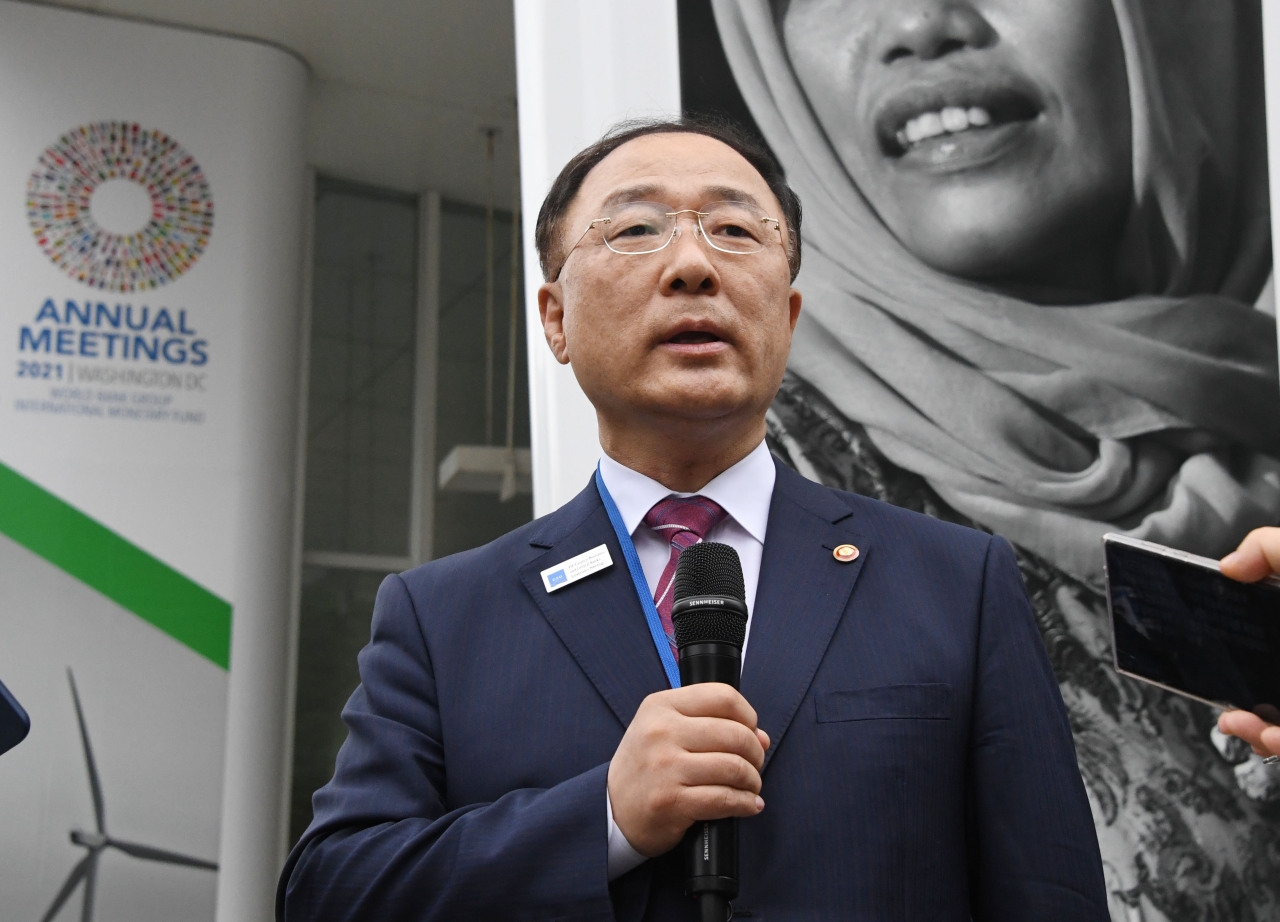 Finance Minister Hong Nam-ki is seen responding to reporters' questions after attending the G-20 finance ministers and central bank governors’ meeting in Washington on Wednesday. (Yonhap)
The implementation of the new global digital tax regime will lead to a small increase in tax revenue for the South Korean government, the country’s finance minister said Thursday.

The two-pillar tax proposal on taxing the digital economy and ushering in a global minimum tax rate, spearheaded by the Organization for Economic Cooperation and Development, was endorsed by 136 countries Friday.

Pillar one aims to reallocate some tax revenue from where multinationals post profit to where they conduct sales. Multinationals with global sales of more than 20 billion euros ($31.5 billion) and profitability above 10 percent will see 25 percent of their profit beyond the 10 percent threshold reallocated to the jurisdictions where they do real business.

The 15 percent minimum tax rate -- pillar two -- will apply to companies with revenues of more than 750 million euros.

“The government believes that combining pillar one and two will act as a slightly positive factor in tax revenue,” Deputy Prime Minister and Finance Minister Hong Nam-ki said after attending the G-20 finance ministers and central bank governors’ meeting in Washington on Wednesday.

Under the global digital tax system, which will come into effect in 2023, one or two Korean companies will be obligated to pay tax in countries where they make sales. Meanwhile, some 80 foreign digital platform enterprises operating in Korea will be affected by the new rule.

“Pillar one is a short-term factor for a decrease in tax revenue, but it is expected that it will turn positive from 2025 to 2030,” Hong said. Korean chipmakers Samsung Electronics and SK hynix are expected to be subject to pillar one.

Samsung Electronics, for which Korea only accounted for 16 percent of net sales last year, will see increased taxes abroad. Google, which reported 220 billion won in revenue here although it was projected to have raked in more than 5 trillion won, will face heavier taxes.

“In the case of pillar two, we believe that the tax surplus factor will decrease over time due to adjustments such as raising corporate tax in other countries,” he added.

During the meeting, Hong welcomed the endorsement of the landmark global tax treaty and called for swift follow-up -- such as further discussions on profit attribution standards as well as the question of a safe harbor for marketing and distribution profits.

Regarding the US government’s demand for Korean semiconductor manufacturers operating in the US to disclose classified internal information about supply chains, Hong said he would discuss the matter during a high-profile economic and security strategy meeting, slated for Oct. 18, which will be attended by the ministers in charge of the economy, foreign affairs and security as well as National Security Council members.

“Respect for corporate autonomy, government support and bilateral cooperation between Korea and the US should be taken into account to deal with the issue,” he said.

The request for the sensitive data was deemed a way to tackle the global chip shortage, but the Chinese government sees it as a threat amid intensifying friction between Washington and Beijing. The due date for the submission of supply chain information, including inventory data, is Nov. 8.