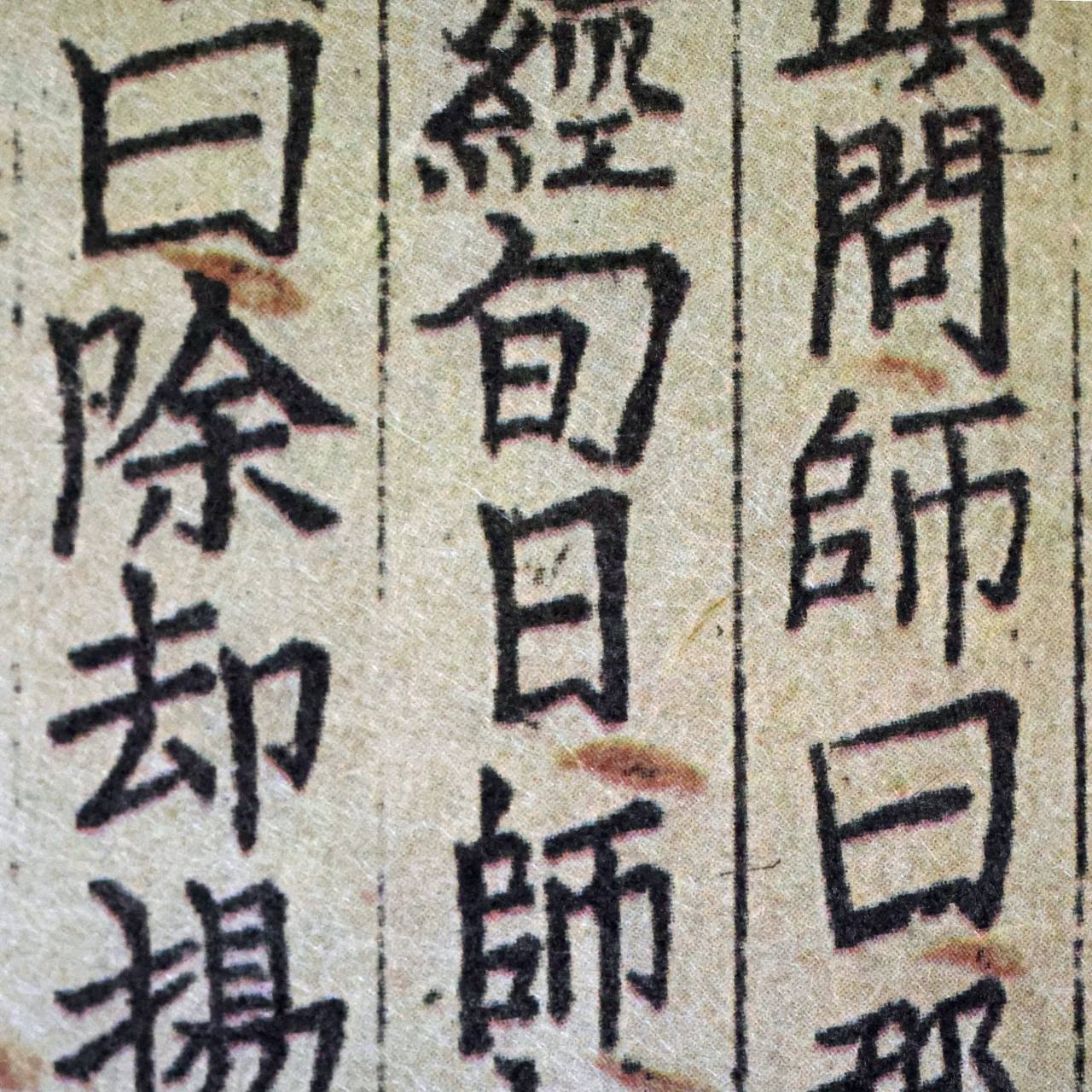 He returned to France with the treasures he found in Korea, including a 1377 Jikji book printed with movable metal type, and a beautiful wife named Lee Shim, a former royal palace dancer he had spotted performing for Emperor Gojong.

Lee, who moved to France with Collin de Plancy in 1893 and accompanied him to Africa the following year, later committed suicide while suffering from depression. 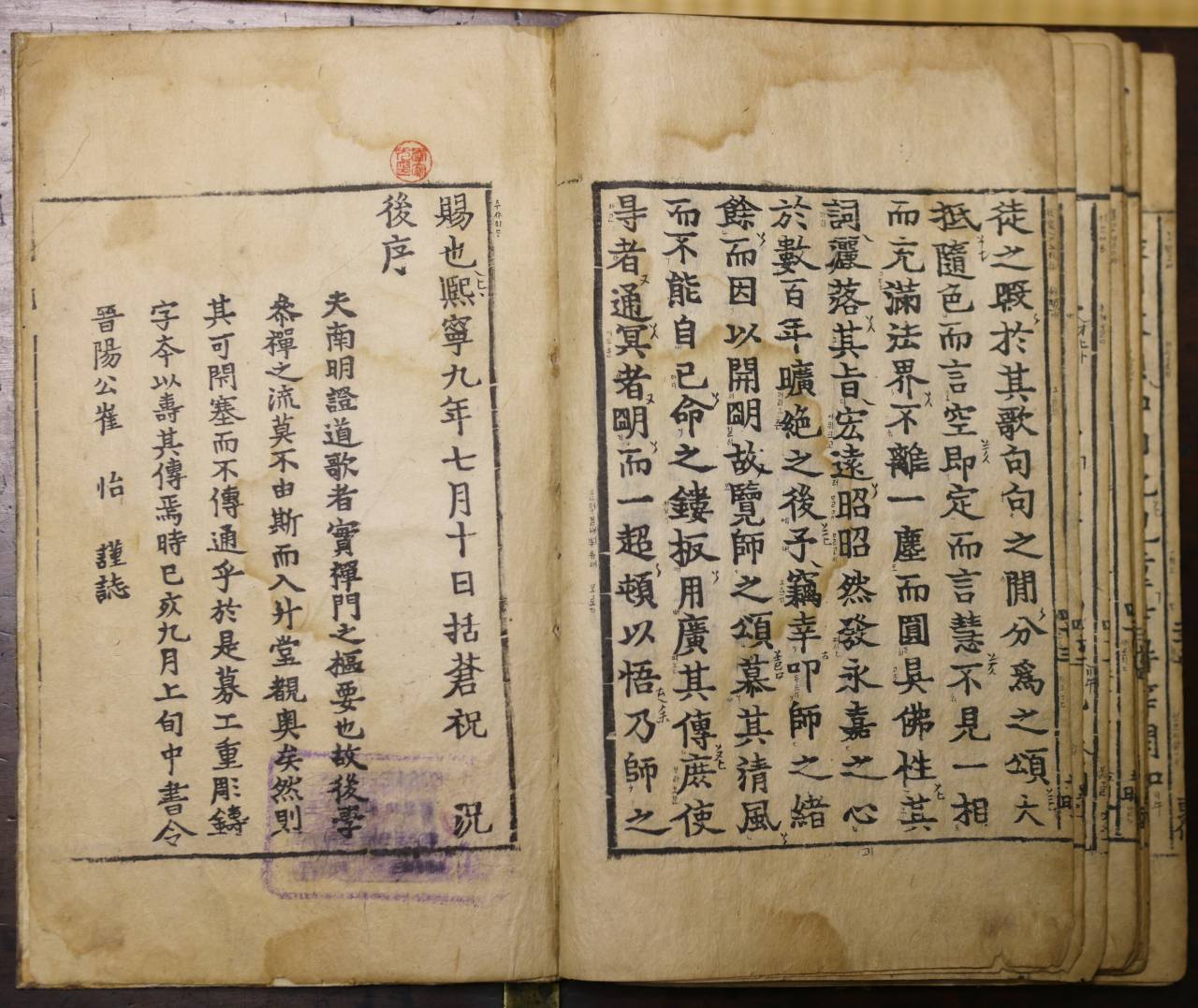 A Jeungdoga book printed by Goryeo military leader Choi Yi in 1239 is a reprint of an earlier book printed with metal type before 1232. The holes are from Hanji paper binding and the last page of the book clearly states when the printing took place.(Hyungwon Kang)
The 1377 Jikji book, which happens to be the oldest surviving book printed with movable metal type, is kept in the “Oriental Manuscripts” division of the National Library of France.

Printed Hanja characters books were the exclusive domain of esoteric thoughts of scholars and Buddhist monks during the Goryeo Kingdom when Buddhism was the national religion.

While printing books with movable metal type was favored by Goryeo kings for its speedy printing, larger numbers of books were printed with woodblock -- xylography -- printing on hanji, or Korean mulberry paper.

A lot of books printed on hanji are still around after centuries, and some are more than a thousand years old. “It was Korean hanji paper that differentiated the quality of the evolution of printing in Korea compared with the poorer papers available in China and in Japan,” according to professor Nam Kwon-hee, the preeminent authority in ancient printings and Goryeo movable metal type printing. 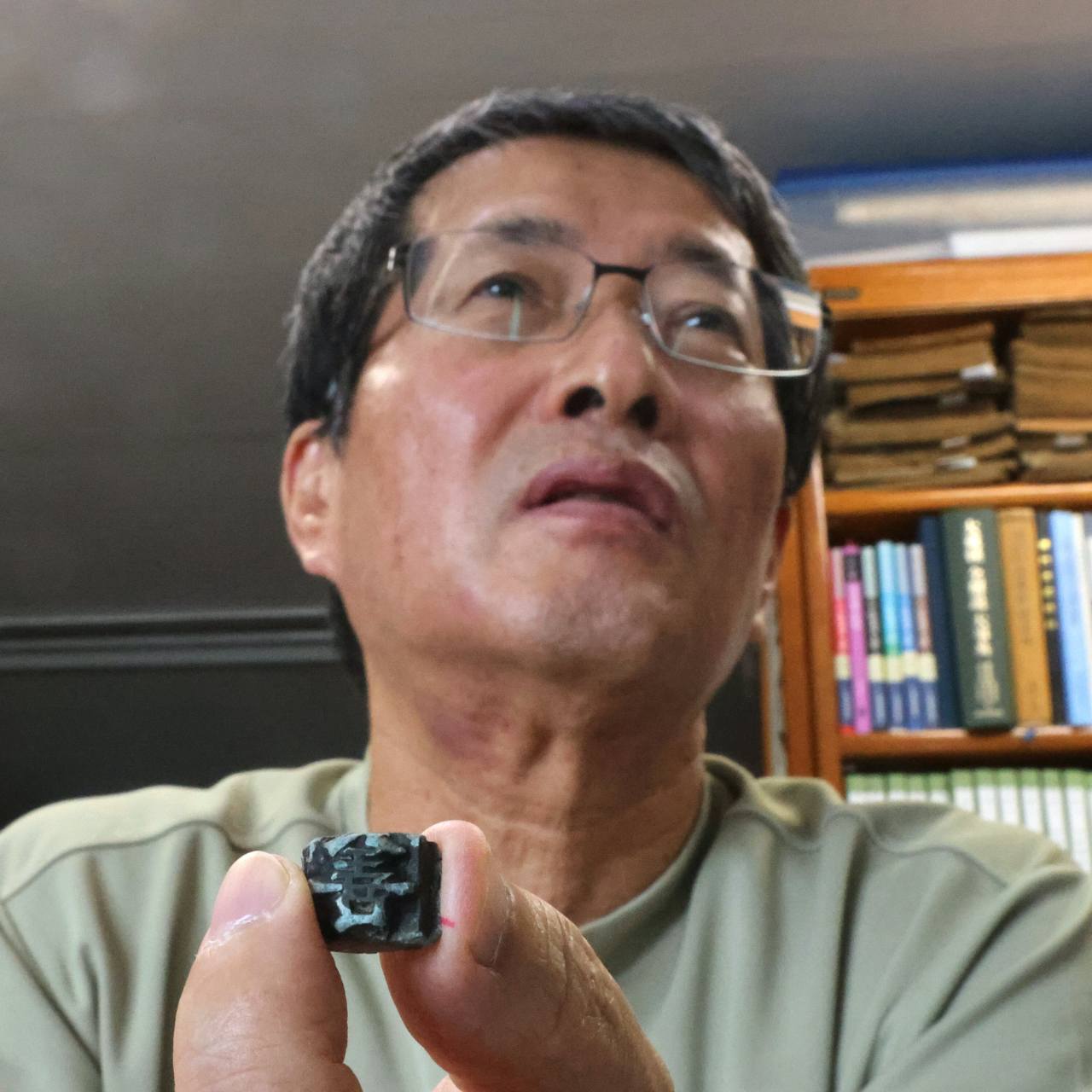 Nam Kwon-hee, an expert in Goryeo movable metal type for printing, holds the Hanja character “hui” as an example of metal type from that period.(Hyungwon Kang)
“Printed books were not widely popular among scholars who had always favored handwritten calligraphy which showed the personality and character of the author who wrote it.” said Nam.

For mass production, the earlier printing technology of woodblock printing was used even after the invention of movable metal type printing. The shifting of the metal types during the printing process presented misalignment of characters.

“Goryeo printing evolved to eventually punched holes to run a wire behind the metal types to keep them aligned, and that technology improved through the Joseon period,” said Nam.

The Jikji book of 1377 was printed at a remote Buddhist temple.

As an expert in ancient printing and books, Nam was among those who examined the second book of 1443 Hunminjeongeum when it was discovered in Sangju, North Gyeongsang Province. Hunminjeongeum is the book in which King Sejong the Great unveiled Hangeul.

Jeungdoga (short for Nammyeongcheon Hwasangsongjeungdo) was printed by Goryeo military leader Choi Yi (1166-1249) in 1239, a reprint of an earlier book printed with metal type before 1232.

The year 1232 was when the capital of the Goryeo Kingdom was moved to Ganghwado from Kaesong in present-day North Korea, following the Mongol invasions in 1231. The brutal Goryeo-Mongol war lasted 39 years until 1270.

Four copies of Jeungdoga from 1237 have been located so far, all of which were printed with wooden blocks carved from the original moveable metal type printed pages in the early 1200s.

Researchers say wooden blocks carved from the book printed with metal types are almost 99 percent the same as the original printing, even reflecting detailed flaws and missing characters because the carving is done with the original printed page.

Nam, who is one of the very few researchers who spent considerable time examining the 1377 Jikji book in France, says the “Jeungdoga book printed with Goryeo moveable metal type printing technology of the 1200s, the first in mankind’s known history, has better quality fonts than those in the Jikji book.

“The difference is that the Jeungdoga book was printed in the capital with more resources versus Jikji printed at a remote Buddhist temple,” said Nam. In fact, the Jikji book shows varying size fonts of the same Hanja characters on the same page.

Until a total of eight pieces of moveable metal type were found during an inter-Korean joint academic excavation of the Manwoldae site in Kaesong in 2007, there was only one Goryeo metal type that matched the font in the Jeungdoga book at the National Museum of Korea.

A Jeungdoga book font metal type for the Hanja character “bok,” which was acquired by the National Museum in 1913, was from Kaesong, the main palace of the Goryeo Kingdom. 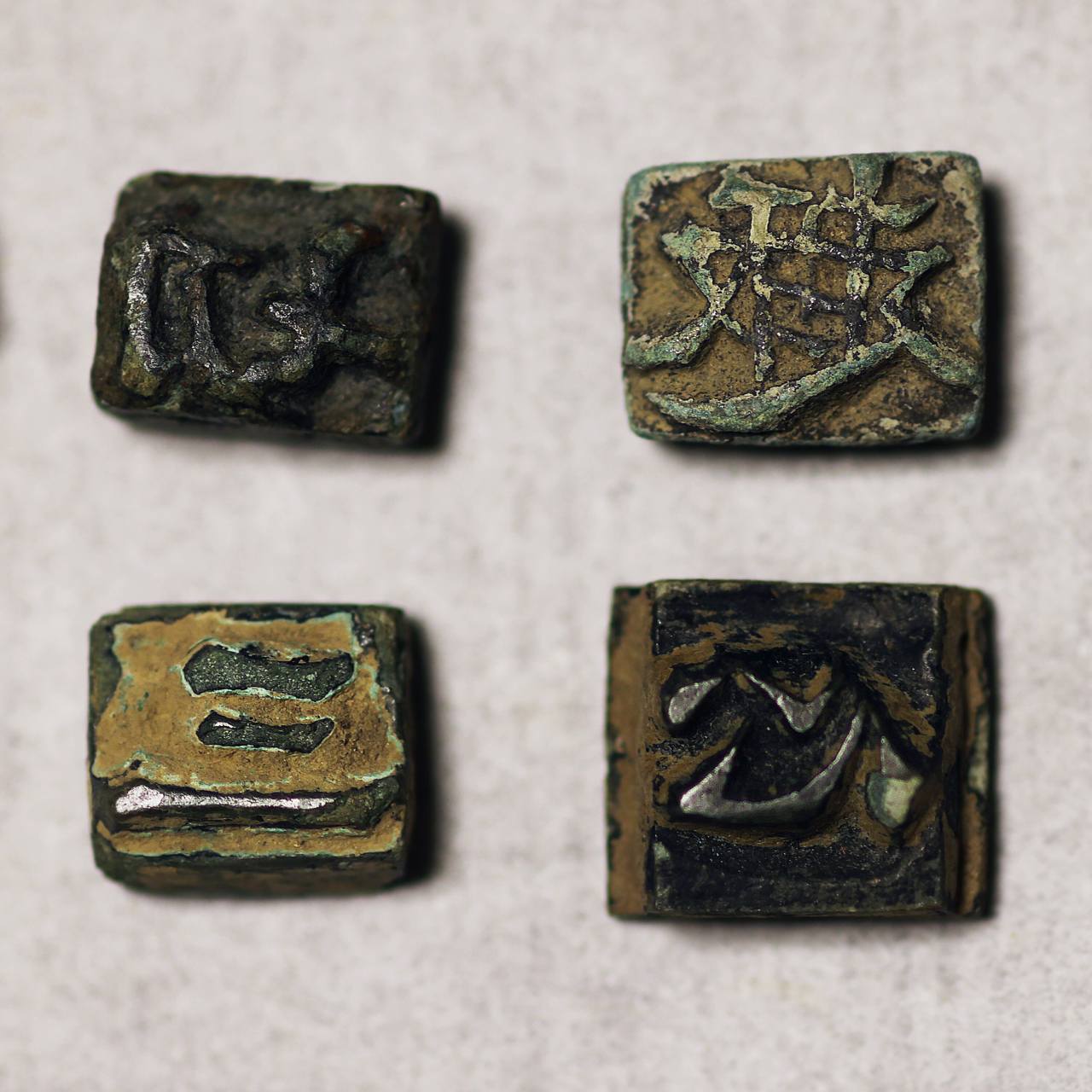 A collection of Jeungdoga Goryeo movable metal printing type from Manwoldae in Kaesong is photographed with permission from Kim Byung-gu’s collection in Daegu. (Hyungwon Kang)
A large number of Goryeo movable metal type Hanja characters matching the fonts in the Jeungdoga book of the 1200s were smuggled out of North Korea to South Korea by antique dealers around 2006.

The metal type Hanja characters were said to have been excavated at the location of the Kaesong Manwoldae, the main palace of the Goryeo Kingdom for almost 474 years from 918 to 1392. The Kaesong Manwoldae was burned down in 1362 during the Red Turban Uprisings that were the beginning of the end of the Mongol Yuan dynasty (1271-1368). 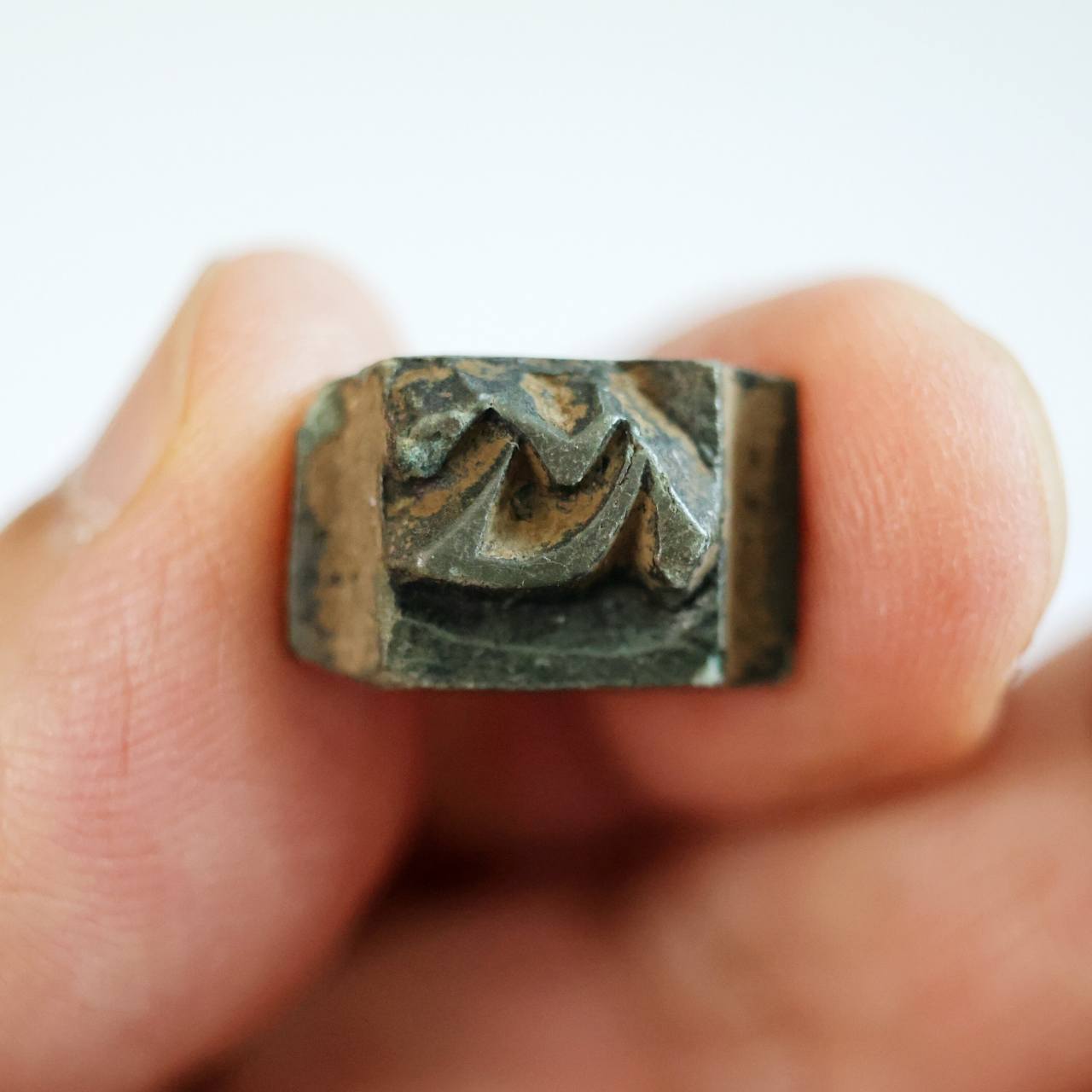 A Jeungdoga Goryeo movable metal printing type that was among those unveiled by a South Korean antiques dealer in 2010 shows the Hanja character “sim,” which is said to have been excavated from Manwoldae, the main palace of the Goryeo Kingdom, in Kaesong, present-day North Korea. (Hyungwon Kang)
Nam examined some 300 pieces of the Goryeo movable metal type that were smuggled out of the Kaesong Manwoldae, at the request of Cheongju Early Printing Museum, when the metal type was brought over to them by antique dealers.

After running the cutting-edge C14 tests to determine the age of the ink under the soil covering the metal type, Nam found the pieces to be from the 12th century with 94.5 percent accuracy.

“The metal type for ‘bok’ in the collection at the National Museum of Korea, and the Jeungdoga metal type have matching grooves on their backs,” said Nam. 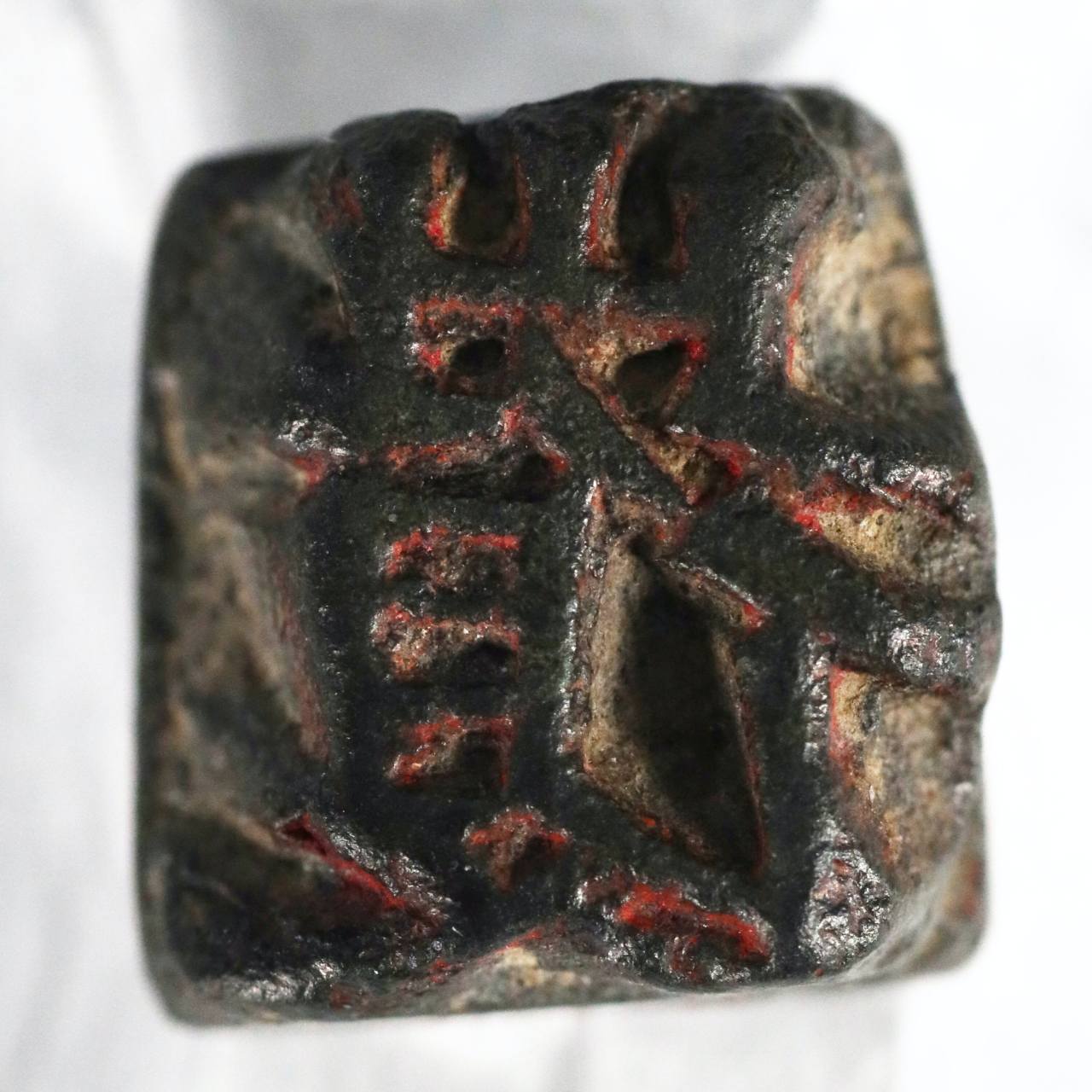 A Jeungdoga Goryeo movable metal type for printing the Hanja character “bok,” which was acquired by the National Museum of Korea in 1913, was from Kaesong in today’s North Korea. (Hyungwon Kang)Photographed with permission from the Korean National Museum in Seoul. Photo © 2020 Hyungwon Kang
According to Nam, 97 of the pieces of metal type were taken out of Korea after they were not recognized as national treasures in 2017.

In the last few years, several research papers falsely claiming the metal type to be of the Song dynasty origin have been released by Chinese researchers to distort the clarity of Korean historical accomplishments and their contribution to printing history.

When a set of Jeungdoga metal type was taken out of Korea, disguised as an antique collector, Nam went to Beijing in January 2019 in search of them. At a Beijing auction company, the same 97 pieces of metal type he had examined in Korea were up for sale.

Nam had the opportunity to acquire the metal type, except the price they had set was beyond his ability. “All of these metal type for a cost less than a condo unit in Beijing,” said the vendor, according to professor Nam.