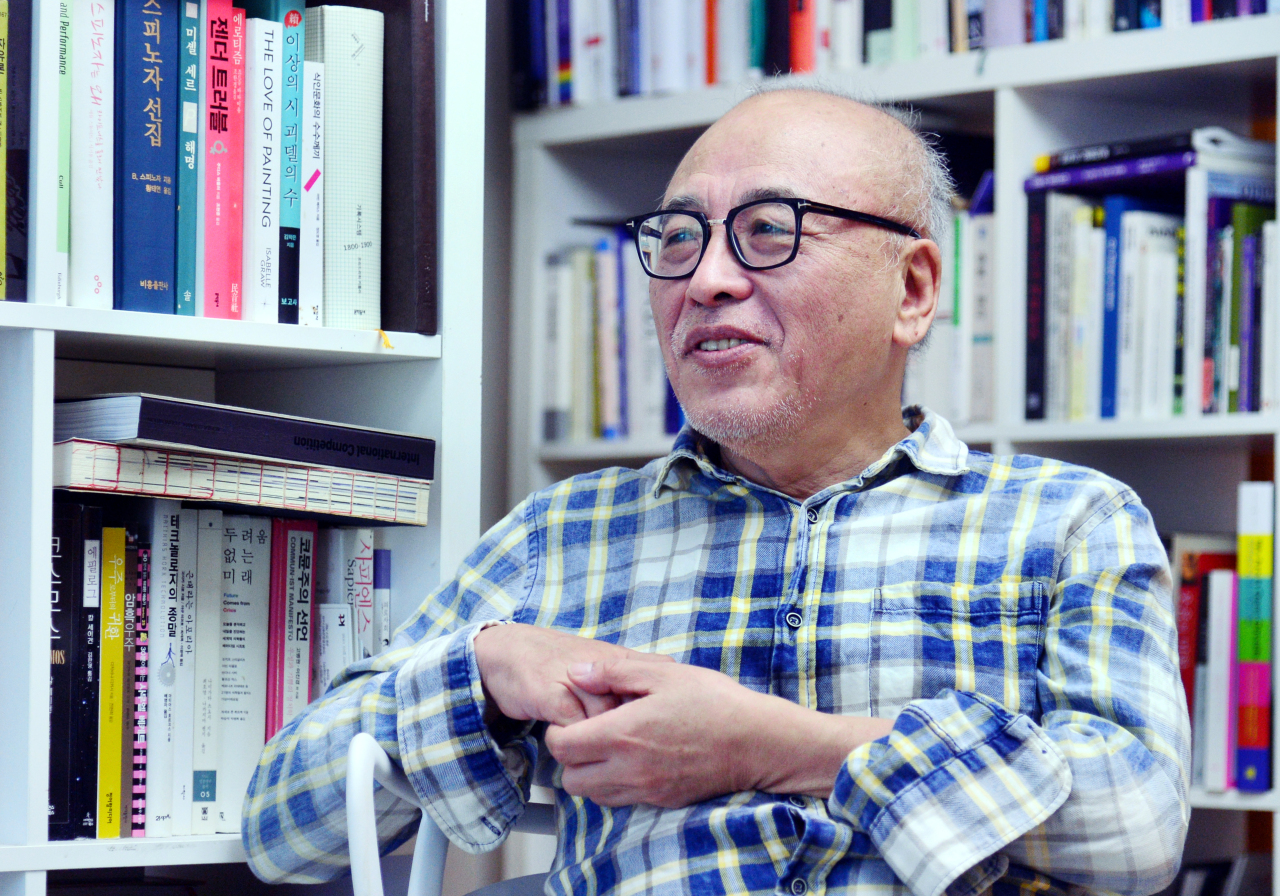 Lee Young-chul speaks in an interview with The Korea Herald on Sept. 29 at his residence in Incheon. (Park Hyun-koo/The Korea Herald)
When Lee Young-chul, an art professor at Kaywon University of Art & Design, proposed to direct the Korean Pavilion for the next year’s Venice Biennale, he felt like the Korean Pavilion should “ring a bell” at the biennale after the world has been going through the pandemic turmoil.

The idea came to him while he was arranging his bookshelves and reencountered the book “La Citta del Sole (The City of the Sun),” by Tommaso Campanella (1568-1639), who was an Italian monk, philosopher, poet and astrologer in the late Renaissance. While he was imprisoned for heresy, Campanella completed the book suggesting a utopian city of shared prosperity and wealth where everyone is treated equally.

“The line he wrote in the book struck me that goes, ‘he is the sound of a bell that announces the new dawn.’ I was like ‘that is it!’ and thought we should strike a bell that shows the new world coming after the pandemic,” Lee said in an interview with The Korea Herald on Sept. 29. “This is a time when we have to dream a new world. We have been hurt by materialism, and the pandemic that came upon us that made things worse.”

Lee, 64, has been a renowned curator since the 1990s, leading numerous large-scale exhibitions as the artistic director at the Asia Culture Center from 2013 to 2015 and as curator for the second Gwangju Biennale in 1997. He was the inaugural director of the Nam June Paik Art Center in Gyeonggi Province.

Lee, who describes himself as a challenge-taker and daring personality, showed confidence in his team embodying the idea he wanted to deliver. He will actually offer a sound of a ringing bell created in a unique way. Lee is working with installation artist Kim Yun-chul, who is also an electroacoustic music composer and has explored magnetohydrodynamics, the study of the dynamics of electrically conducting fluids which is a totally new field of art, Lee added.

“We will use sea water from Venice. The sound will be played by microscopic agents, not by humans nor electricity. The sound will never be like an actual bell, but more like coming from a very deep ocean. I want people to feel intuitively and think freely in the space,” he said. 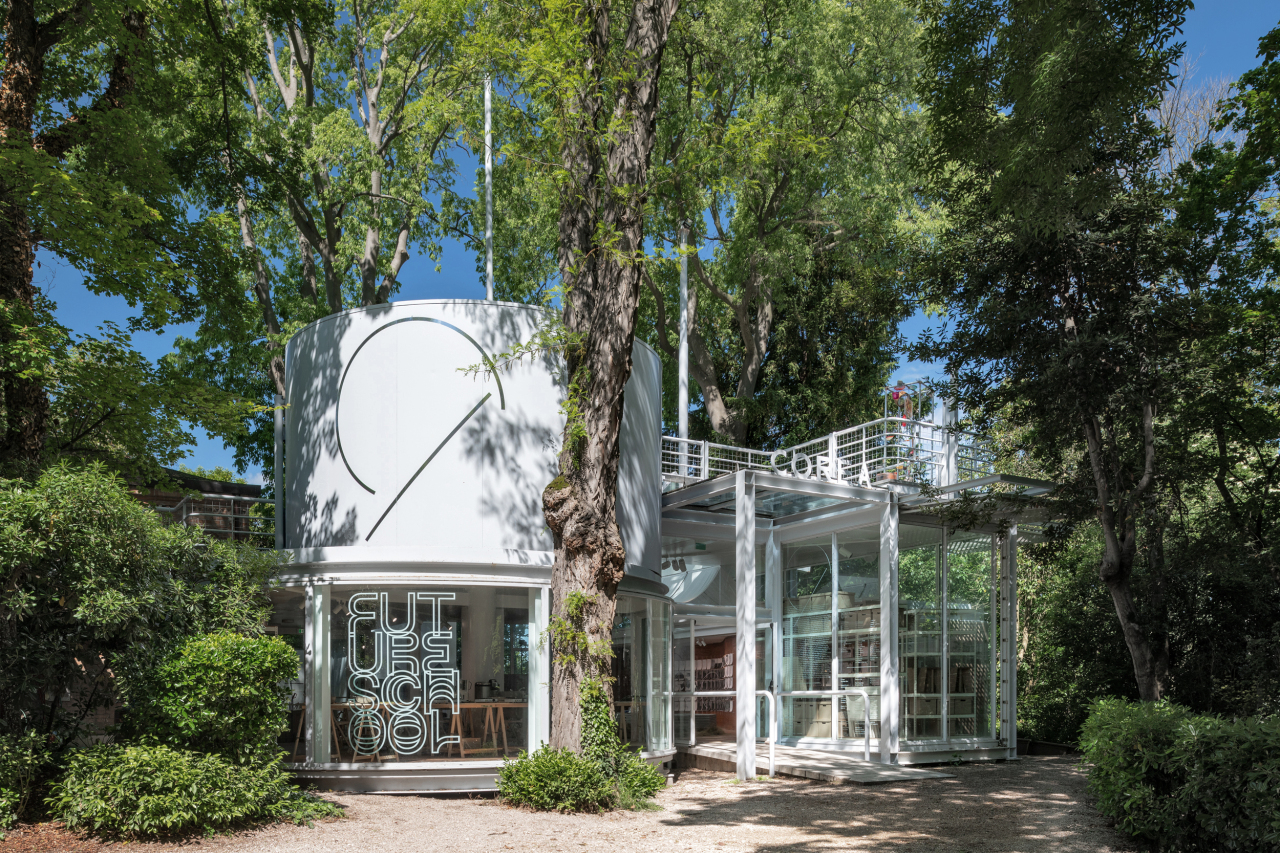 Korean Pavilion at the Venice Biennale (Arts Council Korea)
“A bell has a long history in the East and the West. It makes us feel holy and clears our minds. We all have a bell in our mind because we are spiritual beings.”

Another installation work that represents a swollen sun will be featured, using sunlight from the outside to light a dark room, connecting the outside world to the inside world. The swollen sun is a sun that has lost its function, which can be seen as the collapse of a male-dominated system.

While Lee believes the question he wants to pose is universal, there will be an installation work inspired by Asia’s traditional medicine. When it comes to the Korean Pavilion, he does not necessarily think it should entail “something Korean” as the world is facing the same issues that are challenging humanity.

“But the important thing is, although you touch on a universal issue, the locality in how you reveal the issue is important,” Lee said.

Commemorating the 90th anniversary of Paik Nam-june’s birth next year, Lee is planning an event and a ritual at the pavilion dedicated to Paik, who greatly contributed to establishing the Korean Pavilion in 1995 after he won the Golden Lion in 1993 representing Germany at the Venice Biennale.

“He was a really great artist whose art world is enormous. Paik ended the industrial age and opened a new phase for information art. In respect of Paik, I want to produce an exhibition that would look great in Paik’s eyes,” he said.

The 59th International Art Exhibition of Venice Biennale will take place from April 23 to Nov. 27, 2022, with the title of “The Milk of Dreams,” curated by Cecilia Alemani.