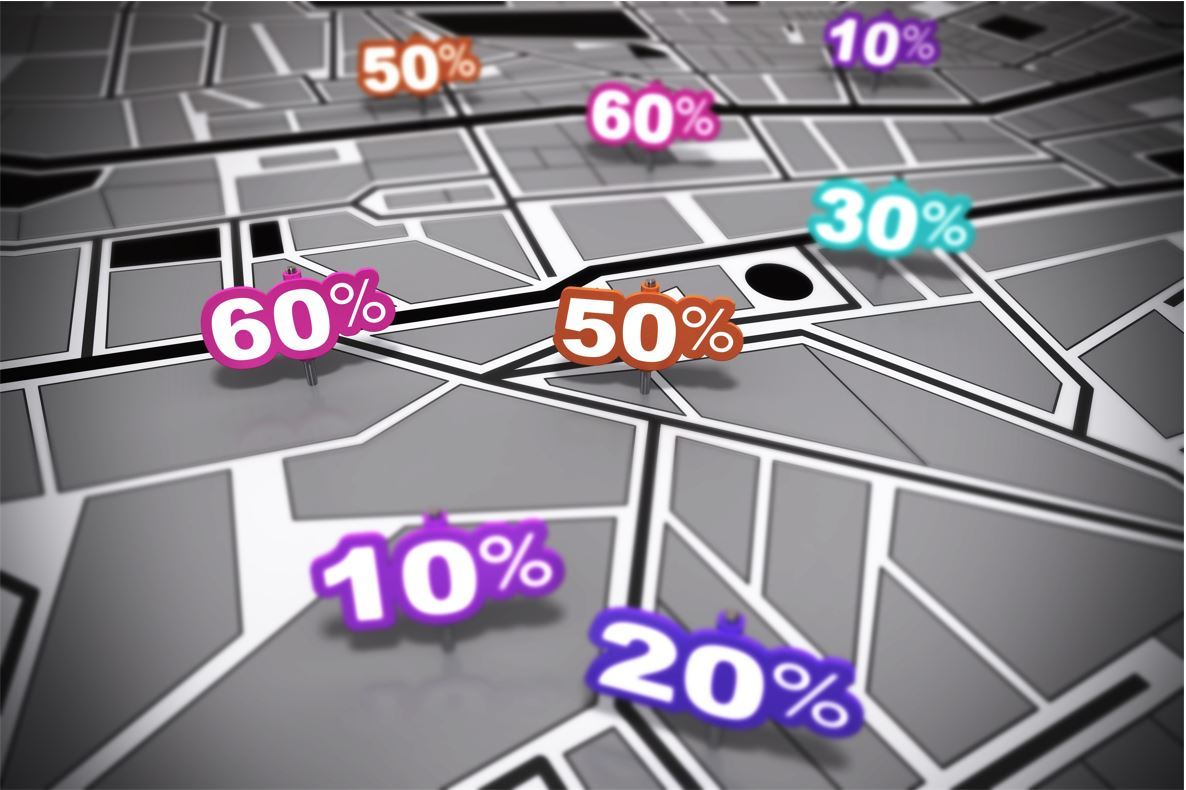 South Korea is witnessing an explosive growth of hyperlocal e-commerce businesses. (123rf)
Trading of secondhand goods is nothing new. But when it is combined with a convenient mobile app and hyperlocal community functionalities, something radically different can be envisioned.

A striking case in point is the soaring success of Danggeun Market, a startup which has popularized hyperlocal e-commerce app Karrot. “Danggeun,” which means carrot as well as an abbreviation for “in your neighborhood” in Korean, is now a symbol of mobile secondhand item trading here.

According to data by Mobileindex, the number of people using secondhand marketplace apps has jumped 141 percent on-year to 16.4 million as of April this year. Of the total, Danggeun Market’s share reached 93 percent, holding an absolute grip on the rapidly-growing sector.

Karrot has become one of the most downloaded apps among Korean users, outpacing Netflix, Instagram and TikTok. “Doing Danggeun” is widely accepted as selling or buying used goods via the app, and a slew of webtoons and entertainment programs have featured or parodied the app’s popularity.

As of August, Danggeun Market’s registered users stand at 21 million, or one user per Korean household across the nation. The number of monthly active users is estimated at around 16 million.

Buoyed by its soaring popularity, the startup has raised a total of $205 million in a series of funding, with its enterprise value set at $2.7 billion. In the process, Danggeun Market became the 16th Korean “unicorn,” or privately-owned company with a valuation of over $1 billion, in August, according to the Ministry of SMEs and Startups.

Danggeun Market’s trailblazing success is sending shockwaves throughout the local e-commerce market, which has long relied on social media, online advertising and platform power. Existing e-commerce companies are rushing to introduce similar services to carve out a share in the mobile commerce of used items, signaling heightened competition in the coming months. 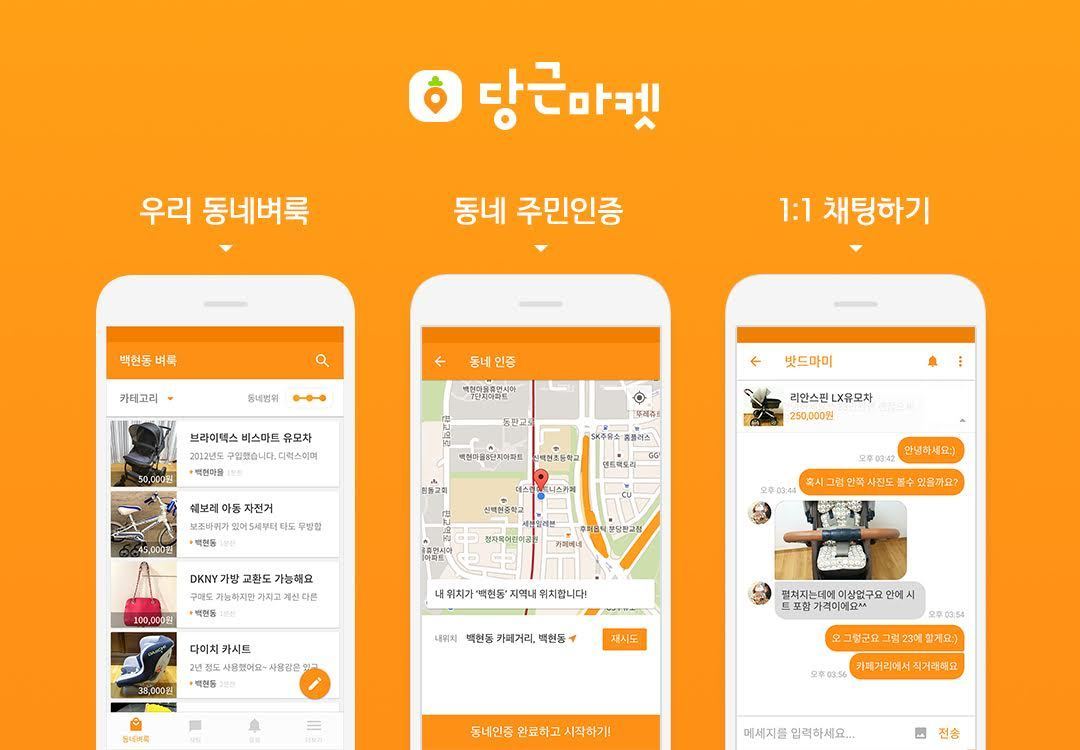 Danggeun Market is now deemed a front-runner in the new business category of hyperlocal e-commerce, but it was a latecomer in the online trade of used items. Joonggo Nara, a massive online community on web portal Naver, was the pioneer that powered the steady growth of online sales of pre-owned goods since its foundation in 2003.

In 2011, Bunjang was launched to compete with Joonggo Nara. Bunjang secured some 16 million users, while Joonggo Nara boasted over 20 million users. The two-way competition, however, was disrupted with the debut of Danggeun Market in 2015 and its expanded service coverage throughout the nation in 2018.

Danggeun Market’s noticeable expansion is largely due to its easy access. The sign-up process requires a user’s location and contact information. Trading used items via Karrot is available only among local residents living in a radius between 4 kilometers to 6 km, and most users meet with their counterparts in person in the same neighborhood without sharing their address or telephone number.

The unique mix of privacy protection, a lower entry barrier and in-person trade among neighbors has worked to reduce the number of fraud cases that are routinely found in the online trade of used goods.

Many Karrot users also place sundry items on the app that will otherwise be thrown away, asking others to take them free-of-charge -- a sort of creative community-based recycling.

Danggeun Market’s innovative business has spurred the growth of the local consumer-to-consumer used goods market. The market of trading used goods is expected to grow from 20 trillion won last year to 24 trillion won this year. This has enticed other companies to consider introducing similar hyperlocal services.

For instance, Lotte Himart, a shopping mall unit of Lotte Group, launched Heart Market, a community-based used-item platform on its website on Oct. 5. Unlike other neighborhood trade services, Heart Market offers Himart’s 430 offline stores around the country as a place where buyers and sellers meet and trade. It offers escrow services to prevent fraud and ensure safe transactions, an extra layer of protection for trading high-priced items. 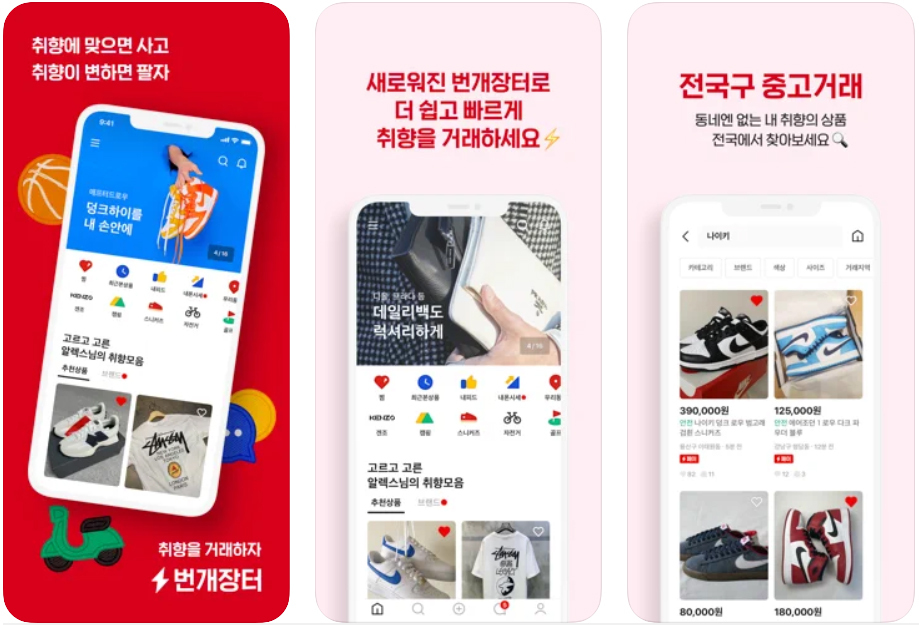 Not all things are going smoothly with the hyperlocal business though. As Danggeun Market relies on transactions between individuals, some disputes cannot be avoided. The issue is the lack of regulatory and policy systems that deal with the growing number of complaints.

According to data filed to the National Assembly late last month, the number of dispute arbitration applications involving Danggeum Market during the January-August period this year was 1,167, more than a 60-fold jump from 19 in 2019.

Disputes over trades in Joonggo Nara and Bunjang also climbed to 500 and 534 during the same period, reflecting an upward trend in conflicts among users over the quality of items, prices and other issues.

Rep. Kim Sang-hee of the ruling Democratic Party of Korea said, “The e-commerce market is expanding rapidly due to the protracted pandemic but the number of e-commerce disputes arbitration staff is far lower than the surging demand.”

Rep. Kim said new staff members should be deployed to specialize in disputes involving the trade of used items online and mobile platforms.

Meanwhile, Rep. Park Hong-keun revealed on Monday that more luxury items are being traded on the mobile platforms. Some luxury business operators reportedly exploit the loopholes of regulations related to such platforms to avoid paying taxes.

Kim said that there is no effective way to prevent or clamp down on such illegal transactions by some business operators which sell luxury items through mobile platforms.

Kim Dae-ji, commissioner of National Tax Service, told lawmakers last week that a formal opinion would be issued for the taxation policy when high-priced used items are repeatedly sold by business operators on digital platforms, after consulting with other government agencies.

Despite concerns, Danggeun Market and its rivals are taking steps to move forward with more streamlined mobile payment systems. Joonggo Naro introduced its own payment system last month and Danggeun Market is also preparing to launch “Danggeun Pay” by the end of this year. Bunjang has been operating its payment solution since 2018.