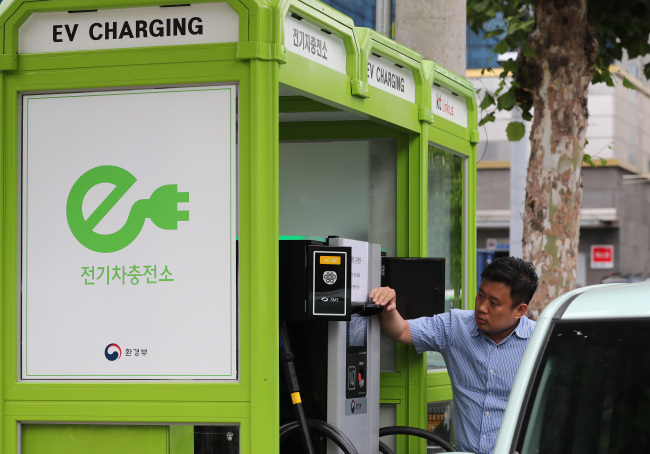 (Yonhap)
For the proliferation of electric vehicles in South Korea, it is key to upgrade power systems installed at apartment buildings, the predominant type of housing in urban areas here, according to a recent study.

In August, the government said it would revise a related law to bolster the supply of such chargers across the nation. U

nder the plan, newly built apartments would need to have at least 5 percent of their parking spaces installed with electric vehicle chargers. Existing apartments should have at least 2 percent.

The KATI report contends that the law could put a strain on old buildings unprepared to handle such charging loads.

State-run power provider Korea Electric Power Corp. has been replacing transformers at residential complexes to respond to a surge in power outages over the last few years, which has stemmed from the increased use of electric appliances such as air conditioners.

The report also mentioned that electricity consumption from electric vehicles could surge during peak evening hours, after 5 p.m. and in the peak seasons of summer and winter.

Although more and more electric vehicles are rolling out on the streets in South Korea, they still only account for 1 percent of total registered cars, data from the report showed.

“(The government) should conduct a comprehensive survey on the electricity capacity of old apartments and identify ones that need to improve their power,” said Jang Dae-seok, a senior researcher at the institution and author of the report.

Jang also advised that the government should focus more on an apartment’s “overall capability to actually accommodate an EV charging infrastructure” than on “individual parts, like transformers and circuit breakers” when building new charging stations.