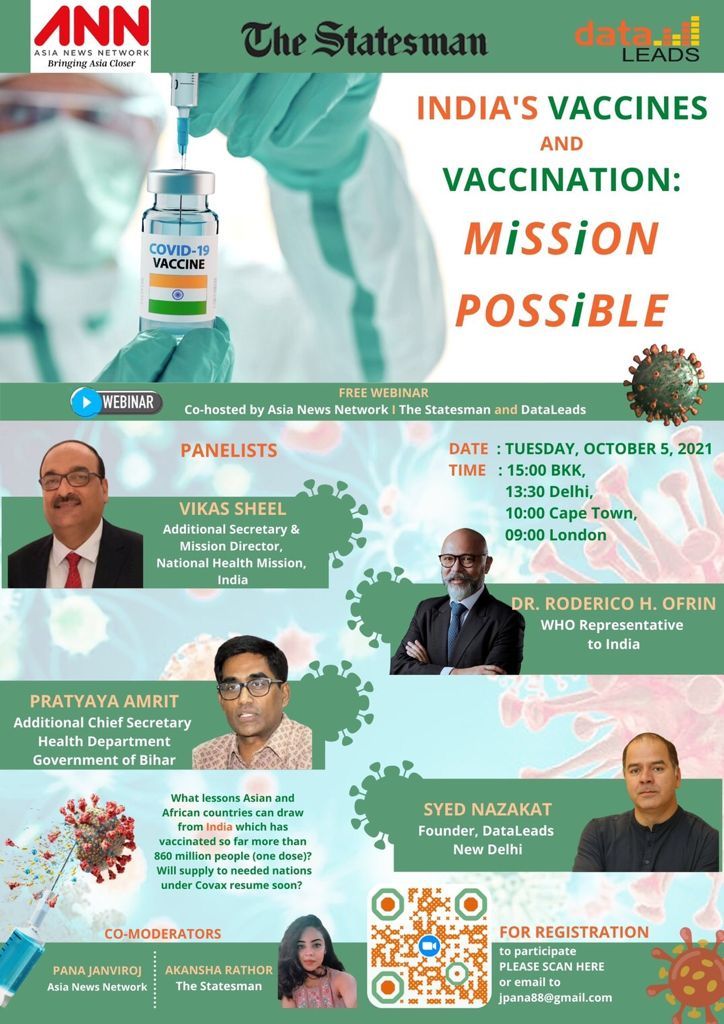 Poster for webinar on India’s vaccines and vaccination (ANN)
NEW DELHI -- Strong political leadership and earnest implementation of policies by a committed bureaucracy have been two key factors in India’s relative success in containing the spread of the COVID-19 pandemic, a senior health official said.

The two key factors, along with the strategy of regular testing for COVID-19 and vaccination, are the weapons that India and other countries can use to stave off a possible third wave, said Pratyaya Amrit, additional chief secretary at the Health Department of the northern state of Bihar. With 127 million people, the state accounts for almost 9 percent of India’s population.

Amrit was speaking at a webinar on “India’s Vaccines and Vaccination: Mission Possible,” along with Dr. Roderico H. Ofrin, WHO representative to India, and Syed Nazakat, founder of the New Delhi-based DataLeads. The event, organized by Asia News Network, was co-hosted by the Statesman, a founding member of ANN, and DataLeads.

India has to date vaccinated more than 920 million people of whom over 660 million have been given one dose, and close to 260 million -- over 18 percent of the country‘s 1.4 billion population -- are fully vaccinated.

The two main vaccines being used are Covishield, the Indian-made version of AstraZeneca’s jab, and Covaxin, an indigenous COVID-19 vaccine.

India’s success in containing the pandemic is borne out by data in the past six months. From the peak of more than 400,000 daily cases and close to 5,000 deaths in April this year, average daily COVID-19 cases have fallen sharply to about 23,000 with some 250 deaths.

WHO’s Ofrin underscored the significance of the achievement. ”What India does is of global importance.”

He said India has a very good system for mass vaccination. Its routine immunization is key. “So the plan is not to reinvent something, but strengthen what you have,” he said.

The “routine” vaccination infrastructure he referred to is India’s universal immunization program called “Mission Indradhanush” for various diseases, including polio. It is implemented by a vast health care workforce, known as ASKA, meaning Accredited Social Health Activist, who number close to 1 million across the country.

Ofrin said ASKA is able to implement a series of microsized plans wherein communities can be reached “within five days, down to block level, every day, to make sure to reach certain houses”.

He said in India “you work to scale.” On Sept. 17, Bihar topped the country’s inoculation honors with 3.3 million vaccinations on a single day.

DataLeads’ Nazakat underlined the importance of not just the technology employed to battle the pandemic, but the availability of critical health data “so fundamental in public health and always the backbone.”

Data was not only available real time per province by 2:15 p.m. every day, but they also provided insights, for example, into “why women got less vaccinated than men,” he added.

Amrit recalled how India got going in January this year with a systematic approach by the central government when they became aware of a vaccine shortage. They adopted a staggered inoculation strategy to contain the spread of infections.

“So we went phasewise. The first recipients were health care workers, followed by front-line workers, i.e., the police administration, disaster management officials, and then people aged 45-plus. We were aware of vaccine hesitancy in some people and limited availability of stocks. Every stage was well thought out. It’s the best success story. The prime minister met chief ministers (through videoconferencing), kept briefing them and took feedback.”

Now, state governments interact with the central government every fifth or sixth day where all relevant issues are discussed.

Amrit hailed the achievement as the best example of “cooperative federalism” for a country that prides itself as the world’s largest democracy.

Leadership extended right down to provincial levels. Even local political leaders backed determined administrative officers along with their teams to ensure that vaccines were available at the right time.

The second wave triggered by a COVID-19 variant plunged the country into a major crisis, as infections and deaths surged exponentially. “We (Bihar) were one of the worst-affected states, but the country also passed through a terrible time, and we all had to put our best foot forward. It was a huge team effort, with support from organizations like WHO and UNICEF, among others.”

“The second wave taught us a lot. For instance, we saw that casualties were far less among health care and front-line workers who were given double doses of vaccine, and even a single dose was proving effective. Seeing is believing. Once we made this observation, we knew that these two strategies -- regular testing and vaccination -- could be strong weapons in fighting the third wave of the virus, if it does come,” he said.

He said in the last few months, vaccine production had been ramped up. States were giving adequate doses and the people could see the results.

When asked if the April peak could have been prevented, Amrit said, “To be very candid, even the best of countries in the world would not have been prepared for this. Day in and day out, we were in constant communication, warning people that the war is not over even if you were vaccinated. The message to use masks, practice social distancing and hygiene by washing hands regularly are being drilled all the time.”

The authorities also learned their lessons along the way, and are now better prepared for exigencies. After struggling to meet the demand for ventilators at the height of the second wave, Amrit said, “Our hospitals now have gas pipelines. We have oxygen cylinders in place. This pandemic has taught the world about the need for health infrastructure, which requires a lot of investment and commitment.”

Ofrin said the process of learning has continued. The WHO has been involved in training some 800,000 health care workers delivering vaccinations. The improvement in operations at the grassroots level continues to give easy access to people to get vaccinated whether it is at work or near a village. “India has a very agile policy and rollout”.

Nazakat added that communication is fundamental in managing the whole crisis. “There was confusion initially because of the lack of health literacy. Is it safe to buy a newspaper and bring it home? How many times should you wash your hands in a day?” There was too much uncertainty.

He said one reason for the initial setbacks was the huge amount of misinformation, which discouraged people from seeking treatment. Some even committed suicide when they got infected.

Amrit said the battle continues, as the country prepares to deal with a third wave, if it does come. Fatigue can set in and people can take things casually. So the authorities have to be creative and implement a “mega vaccination drive”.

For example, in local elections, contesting candidates must show they are vaccinated and there is competition among candidates to get their voters vaccinated. The services of religious leaders have been tapped to deal with vaccination hesitancy among people of different communities.

“It’s a combination of leadership, commitment and the pursuit of a larger goal. Other countries can learn from our experience to save the world from this deadly disease,” said Amrit.

Ofrin added that testing is another “amazing story” for India, including its ability to scale up 2,000 to 2,600 RT-PCR testing labs in four to five months. “The policy and operations are swift.”

Amrit said all decisions have pros and cons. “We must learn to live with the coronavirus. We must believe that life must go on. We can’t have children not attending schools for one year; we can’t have the entire economy in a shambles. It‘s a risk, I do admit, but life must move on.”

“Test, track, treat, follow COVID-appropriate behavior and vaccination -- this is the five-point strategy India is following,” he added.

Nazakat sees an ongoing need to improve the health literacy campaign and to empower people to understand what a scientific claim is and what it is not. “What is a difference of opinion among some people (is) against the facts on the ground,” he said.